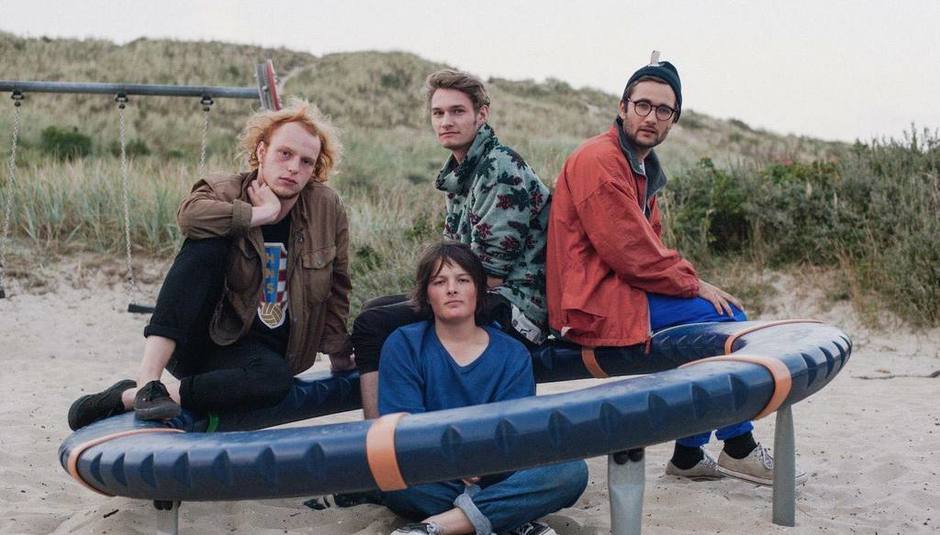 The Netherlands punk rock scene is one of the most vibrant musical communities on the planet right now with several acts primed to rise out of the underground and into the mainstream over the coming months. Leading the pack are Canshaker Pi, a four-piece based in the Dutch capital of Amsterdam. Having formed in 2013, the band - Willem Smit( vocals/guitars), Boris de Klerk (vocals/guitars), Ruben van Weegberg (bass), Nick Bolland (drums) - the band spent the next couple of years honing their sound before putting out first single 'Looking For Love On Ibiza' in October 2015. Their self-titled debut LP followed a year later to a wave of critical acclaim. Produced by none other than Pavement's Stephen Malkmus, it attracted attention to the band outside of the Netherlands for the first time and word spread about their endeavours. Not least the ferocity of their live show which regales the spirit of late 70s punk and early 90s grunge in equal measures.

Having first witnessed Canshaker Pi at exactly the same festival 12 months earlier, DiS caught up with the band during a hectic Saturday night schedule at Eurosonic Noorderslag culminating in the first of 3 busily attended shows.

DiS: 2017 was a big year for Canshaker Pi in terms of broadening your fanbase and gaining critical acclaim outside of the Netherlands. Did you expect things to happen so quickly?

Boris: I didn't expect things to happen so quickly but we've worked towards it so we're really happy with the way things are turning out right now.

Ruben: I don't think we could predict it. We've never predicted anything.
Nick: We were planning on touring other countries and we did so obviously we're happy about that.

When did you notice more people were becoming aware of the band? What do you believe was the turning point?

Ruben: Noorderslag was a big show for us last year because we got booked to play a couple of festivals off the back of that. Lowlands was really nice as well.

Boris: I'm not sure if Noorderslag helped us with touring outside of the Netherlands. Getting lucky and knowing a certain sound guy (Remko Schouten) helped us do that!

Nick: I think getting a slot on some of the most relevant festivals was massive for us. It definitely got us noticed over here.

You toured the UK with Spiral Stairs last September and played some shows with The Cribs towards the back end of the year. How did those shows come about?

Ruben: Honestly those shows were all down to Remko. We recorded our first singles and LP with him and he's become a really good friend of ours. He set us up with Stephen Malkmus. He used to tour with Pavement throughout the 1990s so he knows them really well. He hooked us up with Scott Kannberg (Spiral Stairs) for that tour.

Boris: He's been touring with Stephen Malkmus And The Jicks as well, and their bass player is married to Gary Jarman from The Cribs which is how got those shows. There's one name that links it all together and that's Remko Schouten!

Did your approach to performing live or writing songs change after playing with those bands?

Boris: It didn't change our approach to playing live but it changed how we approach playing together. I think we're a lot better as a band now.

How do UK audiences compare with those back home in the Netherlands?

Ruben: I'd say they're maybe a bit more reserved because they see so many bands play all of the time. A lot of the people that saw us in the UK spoke to us after the show and said they didn't even know there was a band playing that evening! Because there's so much going on in the UK I think people are less excited about seeing bands they don't know than over here.

Willem: I think audiences in Holland can be quite reserved too.

Nick: For us, it's difficult to see because we're from Holland and we play here a lot. We get more of a response because more people know us.

The industry at the moment seems to be weighted heavily towards pop while marginalising the traditional four-piece guitar band. Do you see yourselves as flag bearers rallying against all that?

Boris: No. I don't see us as being anti anything. I think we're on the crest of a wave right now alongside a lot of other bands coming through who are quite similar to us. There's a healthy guitar scene over here right now. Bands like The Homesick and Korfbal for example. That's part of the wave we're on. Everything grows if you give it time.

Ruben: But we also listen to lots of other stuff as well, especially hip-hop. We're fans of music in general not just guitar bands.

You're based in Amsterdam at the moment but would you ever consider relocating somewhere else if the opportunity arose?

Ruben: The UK. Maybe London. Although I guess there's a lot of competition and it isn't exactly that cheap either. We actually thought about moving to Groningen for a while. We talked about it last year but never got around to it.

Boris: It's certainly cheaper than Amsterdam.

Your debut album was produced by Stephen Malkmus and consisted of mainly new material rather than your early singles. Was it difficult deciding what to include on the record? Did Stephen have much input towards the final tracklisting?

Willem: Not really. We recorded about 16 songs when we were making the album and eventually arrived at the final 11 from those.

Ruben: We ended up releasing the songs we had left over as an EP so it was quite an easy decision really. It was all about choosing the best sequence of songs as we believed all of them were good enough to come out in one way or another.

Willem: We'd been playing most of the songs in our live set for a while so they all developed over time.

Do you prefer playing live or recording in the studio?

Boris: It depends what and where we're recording. With the album, we set to try and capture the energy of our live show. But our more recent recordings are a lot more layered.

Ruben: We were on an island for two weeks last September and we just wanted to record new music, try new ideas. The songs we recorded had never been played live before which was a brand new experience for us.
Nick: We'd only just written the songs before recording them which we'd never done before. Previously we'd road test a song live for a while then record it afterwards. So it felt quite weird in a way.

Boris: Playing live and recording are two completely different things. I guess most people's perceptions of us come from our live show. We don't talk about it that much. We don't really rehearse a lot either. We just play live.

Given the benefit of hindsight is there anything you'd do differently now with regards to making the album?

Ruben: No. I think it's a great record and people seem to like it.

Nick: We're really happy with how it turned out. We had no expectations from the outset.

Are there any plans for a second album? If so, is there a projected release date?

Willem: We have enough material to make a record. We have 22 songs ready but we don't have anywhere to release them yet. It really sucks.

Nick: We might release 2 digital EPs. We're not really sure at the moment. We're still trying to figure out what formats work best for us. We just want to get those songs out there.

Willem: We've been touring in the UK a lot to fish for labels and stuff which costs a lot of money. But then at the same time if everything works out it could also be an investment.

Ruben: We're in this awkward position where we have all this music we want to put out but at the same time don't have a label or much in the way of shows either during the early part of the year so we have to figure that out first.

With so many songs to choose from, how do you go about choosing a setlist for your live shows?

Willem: I think it's really important to keep the live show fresh so we try and play a different set every time. Even if we play the same set for two days running it can get quite boring.

Are there any new artists you'd recommend Drowned In Sound and its readers should check out?

Ruben: We saw this band called Lewsberg and they were amazing. Also, Bull from York in the UK. They're playing with us tonight at Kroeg Van Klaas.

Nick: Rats On Rafts are great. They're part of the same scene as The Homesick and Korfbal.
Ruben: Hospital Bombers are great too.

Ruben: Practice a lot, record some music then play as many shows as you can.

Willem: Try and meet as many like-minded people as you in the same genre of music, talk to them and make contacts.