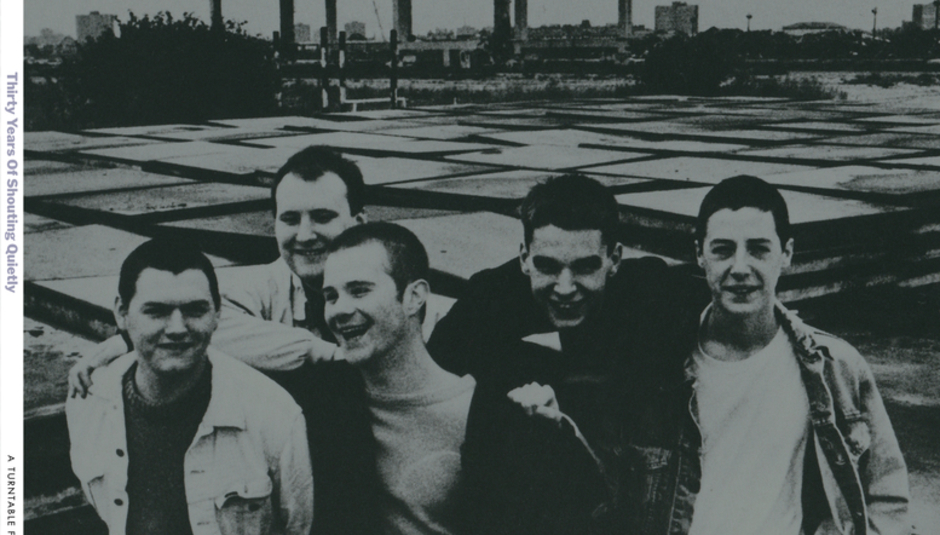 Blackburn five-piece Bradford were once hailed as natural successors to The Smiths by none other than Stephen Patrick Morrissey himself. Indeed, Morrissey covered their 1988 debut single 'Skin Storm' as the B-side to 'Pregnant For The Last Time' as well as occasionally including it in his live sets.

Their self-titled debut came out in 1988 to a rapturous reception from all corners of the music press but it was 1990's follow up Shouting Quietly that established them as one of the most intelligent, politically charged outfits to emerge from the post-C86 indie scene. Produced by Stephen Street and released on his Foundation label, the album receives an overdue reissue entitled Thirty Years Of Shouting Quietly courtesy of A Turntable Friend Records next month (9th February) and comprising of thirty songs including the original LP, the extremely rare French mini-album which was withdrawn by their former label Midnight Music prior to release, and several previously unreleased songs.

Here, singer and songwriter in chief Ian Michael Hodgson talks us through each of the songs that make up their critically acclaimed second record.

This song also opened our live shows and "set our stall out" politically and musically speaking. Little Lefty leaning skinheads poke a Doctor Marten toe at the Thatcher years. A nod to Dexys with the brass section pre-chorus. One of the first tracks to begin the Shouting Quietly sessions with the wonderful Stephen Street in deepest Wales summer 1989.

To Have And To Hurt

I was going through a big word play/pun stage as evidenced by the title once more. A lot of chords in this song - I think songwriters go through a lot of chords stage then relax and stop trying to impress fellow musicians. Then its back to smashing three chords with unabashed new respect for the form. I think Bolly's (John Baulcombe) keyboard playing in the coming out of the middle eight is some of his best.

Talking of bashing chords...I like this one best as it touches upon our live sound and energy - love the choppy guitar texture interplay and I'm proud I'm in there sawing away somewhere too. Yup, it's another word play title too! A classic misfit song for all the misfits out there - takes one to know one.

Hats off to Jos for his spontaneous bass playing on the outro. Lovely guitar interplay by Ewan (Butler) too throughout - Ewan is my favourite guitar player. In the same way Charlie Watts never overplays the drums in the Stones, Ewan does a similar thing throughout the album, providing perfect backdrops.

A Bradford "oldie but goldie" from our earlier sets. It's hard to imagine how crap it is going to a Blackburn nightclubs as a young man and feeling like you're on a bad game show or something. Out pops a song of course. This one. The hair I was combing in the song has since disappeared, as has any semblance of Blackburn nightlife.

Stephen Street's production and ideas throughout the album are superb and this, our second single release from the album shines radiantly with them. It's funny how nearly all the songs on this album bar 'Radio Edna' and 'Gary's Going Down' come from a highly charged emotional perspective. We were all very switched on throughout the three weeks of recording - miles from anywhere with only cows and gravel and dodgy betamax videos for company. I frequently went on walkabouts - a kind of pseudo shamanistic vision quest. I used red and black boot polish to decorate my torso, found a big stick, made a fire or two and went off on solo treks. A picture exists.

A real person - now sadly departed. She had the sweet shop at the top of the street where I was born - incidentally I was born on Stephen Street which is a lovely coincidence. The band hardly feature on the instrumentation on this song. Mr Street got busy with the strings and the harpsichord which made me feel a little like Paul McCartney in 1965 - and you know that can't be bad.

I like the jaggedness of this one - it's short and rattly and has a strange bit of attitude to it. Again I love Ewan's guitar work and smile at some of my own.

Trivia: the line "Give it some gas" came from Ewan's driving instructor who used to shout it at him on lessons.

Thankfully NOT any kind of pun or innuendo in the song title. It used to mean going to prison, or it's used in boxing, but here it just means the poor boy is sinking in the post school eighties dole quagmire - a swamp every Bradford member had waded through at some stage or other. Nice acoustic feel to this one - the most unembellished of all the album tracks - I'm surprised at my use of key change at the end; t's a tired old trick that works. Again, I must've been out to impress...

The chorus lyric came to me on one of my rare staying up very late nights while I was in a heightened state of consciousness - I wanted to write about sex in an almost completely non macho way, as an act of worship or something. For obvious reasons I have great affection for this song - it now has a life of its own - there's even a techno version out there as well as a ukulele one. I'm very grateful that people have recorded one of my songs.

Stephen had great vision when it came to realising a song and freeing it from its initial acoustic guitar inception. A real downer of a closer and once more totally heart felt. And youse all thought skinheads were all tough and that.

Back in the day Ewan and I enjoyed one of our first pop star moments when the song started playing in a record shop as we went up the escalator - and we actually were in Liverpool at the time. This was our first proper recording session with Stephen in Essex I think. I remember hay bales. I'm so moved and proud of the production on this - it's glorious in its sweep and majesty - Timpanis for crying out loud! Big strings! A bit of falsetto! Home of The Beatles!

Thirty Years Of Shouting Quietly is out on 9 February via A Turntable Friend Records.

For more information on Bradford, please visit their Facebook page.

"The US never wanted anything to do w...

Rapt In Rabat: DiS Does Visa For Musi...