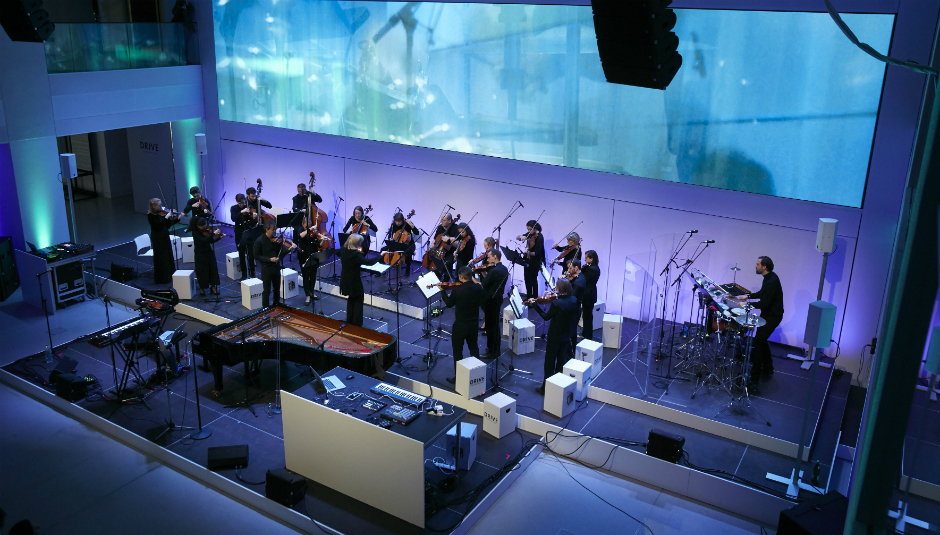 You wouldn’t have to search too hard to find a thinkpiece on how popular music has come to the end of its inventive period and is now stuck in an eternal, tortured regurgitation phase. It has been a theory for several decades now that technological advances have shown us the full range of possible sounds on the spectrum, and that we’ve used them all. This is an ill-founded idea for a list of reasons too long to explore here, but chief among them is that musical progress was always based on taking familiar traditions and putting an unfamiliar obstacle in their way in order to create something new.

One of the trending areas where this still happens in riches is the world of ‘modern classical’ music, which has been having a moment across Europe and North America this decade. One of the beacons of the movement is Germany’s Neue Meister, a plucky, youthful imprint of the establishment label Berlin Classics. Their excavation and championing of contemporary experimental composers has led to a series of concert nights in Berlin, the sixth of which takes place tonight in the vast, modernist complex DRIVE, which by day masquerades as a Volkswagen showroom, until at night it can let its hair down and live its true life as a futuristic concert hall. Tonight they have drawn their biggest crowd to date, which speaks as much to their ability to draw the most sought-after figures in this world as it does to the public’s growing trust that Neue Meister’s stamp of approval alone is enough.

Manchester’s John Metcalfe opens the night’s proceedings. As founder of the classical offshoot of Tony Wilson’s Factory label and a former member of Factory band The Durutti Column, he has his own cult credentials, and tonight he premieres his piece ‘Flood, Tide’. Opening with his rippling, autumnal piano (evocative woodland vistas are projected onto the hefty screen behind the stage), the piece is encouraged into the light by the increasing presence of violin, as if to coax the sunshine into the sky. Yorkshire’s Rosie Doonan is Metcalfe’s vocalist of choice, her voice gentle enough not to dominate but distinct enough not to blend in.

For the final section of the 30-minute piece, an electronic beat slips into the arrangement, impressive in its ability not to cause an awkward segue. The crescendo arrives in the form of a powerful, cascading swirl of strings, reminding us that while organic and electric are not enemies, the organic touch rarely lets you down.

Next is Spanish composer and pianist Oriol Cruixent bringing us ‘Bacchanalia’ from his three-part cycle Trinoctium. Sparse, tribal drums run through most of it as if scoring a frantic foot chase in a climactic movie scene. At first, they make hesitant friends with the choppy violins, until the moment when they find a stride alongside each other, and the chase appears to double in speed.

The centrepiece is a ferocious multiple drum solo, the likes of which would turn any self-serious 70s prog band green. A mixture of skin and metal, the diversity of tones and rhythms is staggering; it’s not what the average punter imagines when they think of ‘classical music’, that’s for sure. Finger-plucked strings eventually re-emerge for the final act of a piece that is beautiful, exciting, and surprising at every turn.

Germany’s Sven Helbig rounds out the night’s first half with his piece ‘Tres Momentos’. Opening with the approaching rumble of thunder and rain, three violins dart and soar, as if weaving a tear-stained quilt. The mood changes when a death-rattling drum quickens the pace and the strings turn panicked and stabby, a theme only reinforced by the blaring blood red static visuals on the big screen.

In a brilliantly shocking moment, all of the players stop playing but the music continues. Anyone who has seen the Club Silencio scene in David Lynch’s Mulholland Drive might have had a terrifying flashback. What have we been watching then? Of course, the band have been looped and layered by Helbig’s synthesiser, the wizard not just no longer hiding behind the curtain, but standing proud front and centre. The sound decays in its natural half-life, descending into hissing white noise before the final thunderclap brings it to a sudden climax. It’s a playful, inventive, and contemporary set.

The evening is served in two halves and the second is begun by a masterclass in the music of Johann Sebastian Bach. It is the first in three movements to headline the show, a straight, conventional performance led by the charismatic piano of Sebastian Knauer and backed by a twenty piece string section. In a night of fresh, future-focused ideas about how to reshape and reimagine classical traditions, a reminder of the fundamentals is welcome and is very warmly received by the knowledgeable audience.

The middle section is dedicated to Arash Safaian’s award-winning ‘Uberbach’ piece, which the composer himself describes as an attempt to create a piece of music that evokes the spirit and memory of Bach without actually including any of his writing. Safaian himself joins the stage on synths for the remainder of the night, as does Pascal Schumacher on vibraphone, and for this piece, his quadruple-stick dexterity is a mesmerising delicacy. ‘Uberbach’ succeeds in its ambition, evoking the repeating canons of Bach’s signature but infused with some 21st century DNA thanks to a dedication to the head-nodding urgency of modern electronica.

All of which leads to the main event. Pantha Du Prince has provided a remix of ‘Uberbach’ named ‘Mondholz’, such was the impression the piece made on him, and tonight he brings the third installment of this path from past, through the present, and into the future. His surreptitious arrival on stage, mid-piece, is typical of the modesty of the man, and the quiet murmur of appreciation at his emergence is testament to the respectfulness of this audience. Muffled, warm beats begin to emanate from his hands, slowly mushrooming through the room, whilst the screen fills with firefly-like drops of bright light.

‘Mondolhz’ shuffles around the same contrapuntal core that ‘Uberbach’ did with the full band, dwelling on the canon repetitions and folding in on itself to find ways to grow. As is typical of Pantha Du Prince’s compositions, the beat is central but it is the flickers of magic that surround it, and the minute inventions that decorate the sonic palette, that give the music the rich, human texture that make it so special.

The fact that this chapter of the story is told through the medium of synthesised electronic music is almost beside the point – in no way could the centuries-long path have been made clearer of how we arrived here. He and Safaien have not just navigated a way through history to find a means of incorporating old and new with a mature, graceful style, but they have shone a light ahead to suggest ways for others to pick up from here and continue the push forward. The ‘modern classical’ doubters must be dropping like flies.

For more information about Neue Meister, both the label and the concert series, please visit their official website.