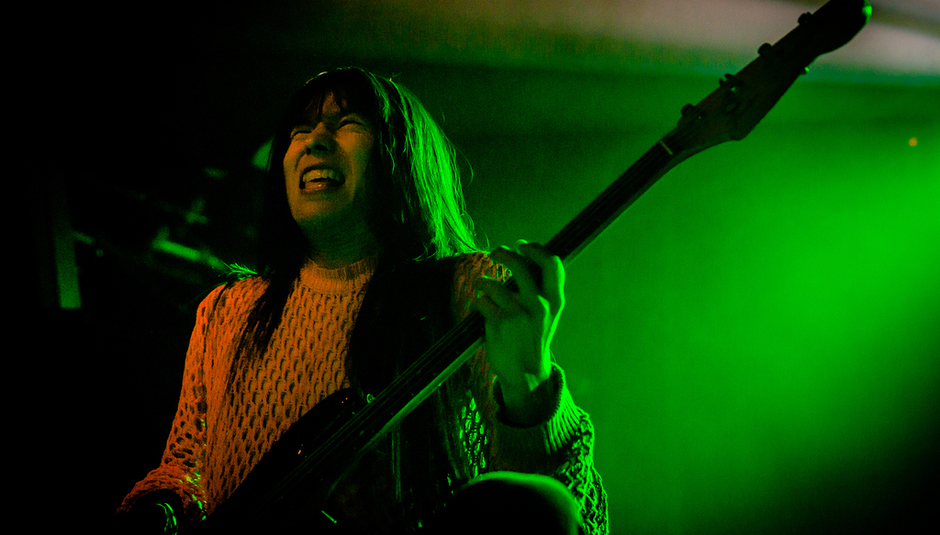 Outdoor festival season might be over but there's still plenty of events happening up and down the land to whet appetites throughout the winter months. Take the growing number of weekend and one-day events in many provincial cities for example featuring an array of both established and emerging artists from the UK and beyond.

Last weekend (20-22 October) in particular saw a number of events stretching from the south west of England (Bristol's Simple Things) through the middle of the country with Ritual Union in Oxford and All Year's Leaving in Birmingham, while over in the Pennines another incredible White Rabbit event ensured Todmorden became the northern epicentre of music for a day. In such times of austerity, value for money is key and with such mouthwatering line-ups on offer at incredibly low ticket prices (a weekend ticket for All Year's Leaving cost just £25, which works out at just over one English pound per band. Bargain!) its easy to see why punters flocked from far and wide to grab a piece of the action.

Drowned In Sound's weekend begins in Oxford at the inaugural Ritual Union. Set up by Birmingham based promoter Simon Bailey, his novel approach to the multi-venue festival concept in concentrating every venue to be on the same stretch of road proves to be a winner with everyone from festival goers to the artists themselves. Set on Oxford's vibrant Cowley Road. The five venues in question - The Bullingdon, Library, Truckstore Records, O2 Academy and sister venue Academy 2 - house over thirty artists that represent great value for the paying customer.

With clashes being inevitable, DiS is spoiled for choice. Nevertheless our decision to opt for Melt Dunes' psychedelic overload proves a fruitful one. Their half-hour set evokes thoughts of how Pink Floyd's interplanetary excursions in the UFO Club might have sounded back in the day. Or a less opiate fuelled Hawkwind. Wherever their sources of inspiration are drawn from, the Southampton outfit opens proceedings in style whilst setting impeccably high standards for every act to follow in the process.

Added to the bill as late replacements for Dead Pretties who sadly announced their split a couple of days earlier, Birmingham four-piece The Lizards do their utmost in living up to Melt Dunes' transient performance. However, their combination of effects-laden psychedelia over punk rock song structures just falls short, but a promising future lies ahead. Which unfortunately doesn't appear to be the case for Traams if the split/hiatus rumours (more about those later) are true. Playing a mid-afternoon slot in the Bullingdon as though their lives depended on it, if this is to be their penultimate show for the foreseeable future they treat Oxford to an unforgettable performance, their Steve Albini meets Can schtick working an absolute treat.

London based newcomers Mellow Gang also hit the spot with consummate ease. Playing to a packed room, their fusion of skewered pop and country rock with shoegaze overtones reminds us of an embryonic Howling Bells with recent single 'Vendetta' standing out immeasurably.

It's been a rollercoaster few days for Nottingham trio Eyre Llew. Debut album Atelo came out two days earlier to a wave of critical acclaim but this morning they discovered their van had been broken into outside the band's studio (which they have to vacate at the end of this month due to rising rental costs) causing them to arrive later than scheduled. Despite a traumatic day, their set at Truckstore Records proves to be one of Ritual Union's finest - not to mention loudest - even if two-thirds of the band play at ground level while drummer/pianist Jack Clark finds himself almost impaled against the back window one level above them.

Beforehand, Ulrika Spacek once again demonstrate why they've become one of the most sought-after live bands in the country. Their set, mainly culled from this year's excellent Modern English Decoration, proves both Slowdive's and Ride's decisions to take them on tour were more than justified. Flamingods are another band who've made their name playing anywhere and everywhere on the festival circuit this year and once again, their worth to this bill cannot be underestimated in front of a packed Bullingdon where a policy of one-in, one-out is currently in operation.

Another band who've spent this year honing their live show while releasing great records in the process are Josefin Öhrn + The Liberation. With core members Öhrn and Fredrik Joelson now based in London, they've assembled a line-up of UK based musicians including former Test Icicle Rory Attwell on guitar and their woozy, pastoral set also ranks as one of the day's most memorable. 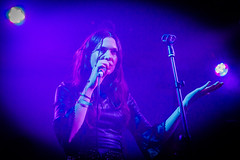 With the evening drawing to a close, it's left to Japanese noise terrorists Bo Ningen to bring the first Ritual Union to a ferocious climax. Playing upstairs in the Academy 2, their eclectic brand of punk, rock, psychedelia and as many things as they can possibly fit in between demands everyone's attention from start to finish. Their show-stopping extravaganza being a fitting way than to end such a fantastic day's worth of entertainment.

The following day it's the turn of Birmingham's All Year's Leaving to provide the musical thrills and it doesn't disappoint in any way. Organised by the This Is Tmrw collective and taking place at the Hare And Hounds in the suburb of King's Heath, we're here for the second and final day of an event we're told already hit the heights twenty-four hours earlier thanks to some outstanding performances from The Orielles, Her's, and Spring King among others.

Sadly, traffic delays mean we miss MATTERS, who we're also reliably informed kickstarted this afternoon in incendiary fashion. However, when we do arrive, it's local four-piece Sunshine Frisbee Laserbeam whose own unique take on sonic driven lo-fi recalls some of Birmingham's finest from the past such as Jameson and Johnny Foreigner which is just as well considering they boast at least one former member of Dystopia among their line-up.

Rhode Island outfit Downtown Boys have been an underground phenomenon for a while now, and their blistering set here lives up to all prior expectations. Vocalist Victoria Ruiz undoubtedly proves to be a focal point, her performance bordering on the confrontational at times in a way both Poly Styrene and Ari Up would have been proud of were they still with us. Both politically and socially aware, closing number 'A Wall' is dedicated to Donald Trump and delivered with all the raging intensity one would expect from an American citizen clearly horrified at what's happening to their country on a daily basis.

Meanwhile, New York duo Diet Cig rewrite the rule book on how two-piece bands should perform in precisely thirty minutes. Livewire singer/guitarist Alex Luciano does the work of four people alone while Noah Bowman holds it all together on drums. Songs like 'Road Trip' and 'I Don't Know Her' off this year's ace debut Swear I'm Good At This come to life even more in a live setting and by the end of their set the whole room is convinced less really can be more when it comes to forming a band.

Washington DC's Priests also state their claim as one of the day's highlights, their repertoire consisting of both poppy moments reminiscent of early eighties new wavers Martha & The Muffins alongside the darker side of alternative rock that Christian Death used to knock out in their sleep. Combining performance art with the aforementioned soundtrack, they're an unmissable live experience and one that will surely pick up more followers with every subsequent show.

For the second time this weekend we find ourselves in the company of Traams and while their long-term future becomes a little clearer - the band are taking a year out to have babies and make a new record - they're a revelation for the second time in twenty-four hours. Early composition 'Low' is a welcome inclusion in a set that bites continuously, at times threatening to implode, culminating in a frenzied run through latest single 'A House On Fire'. Signing off for the foreseeable future in style, Traams remain one of the UK guitar underground's best-kept secrets.

Although a celebration of sorts, there's also a tinge of sadness about this evening's headliners Idles. While being the undisputed band of the year - on these shores at least - tonight's show represents possibly the last opportunity many people will get to see them play such an intimate show as big stages in bigger venues surely beckon in 2018. In a few days time they'll open for The Prodigy in Madrid having done the same thing at the O2 with the Foo Fighters last month, the culmination of nine years hard work that's finally come to fruition this year. The sky's the limit for a band who've not so much tapped into the zeitgeist of the day, but actually made said zeitgeist meet them halfway. With recording already well underway for the follow-up to January's debut Brutalism, they play three new songs tonight (four if you include the also unreleased 'Rottweiler' which has been a staple of the live set most of this year). Opener 'Colossus' continues where many of its predecessors left off; brutal in delivery and not too dissimilar to the Dead Kennedys at their peak, its structure actually mirroring the aforementioned's 'Holiday In Cambodia' in parts. 'Samaritans' is perhaps the most immediate of the trio, its refrain "Man up, sit down, chin up, pipe down!" already being chanted back at singer Joe Talbot by the time he reaches the end of the second verse.

The third new song they play, 'Alcohol', is perhaps the most uneasy listen of the three. Relentless in its execution and darker than much of their other work, if anything it suggests album number two could be an even more desolate ride than its predecessor. Elsewhere, the now familiar songs from Brutalism elicit a response that's both emotional and volatile in equal measure with stagediving and crowdsurfing aplenty amongst a moshpit that takes up over half the room. It's to Idles' credit that songs of a personal nature like 'Mother' and '1049 Gotho' have resonated with so many and if this is to be their last hurrah in front of an audience within touching distance of the stage, they couldn't have delivered a more energetic performance if they tried.

A perfect finale to an incredible weekend and one that highlights just how important the grassroots DIY circuit is to live music.