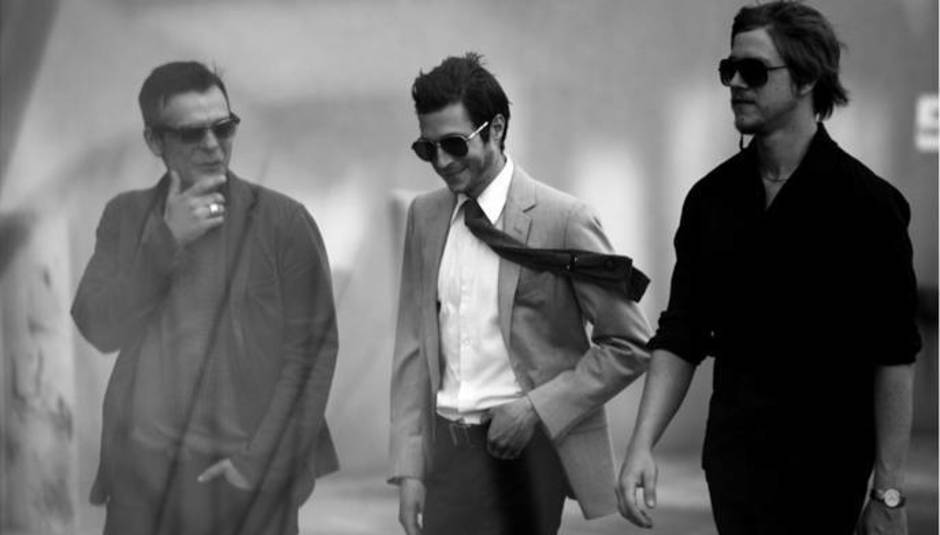 Interpol: Turn On The Bright Lights at 15

Interpol: Turn On The Bright Lights at 15

Some albums mature gracefully whereas others belong in the past, a document of a time way back when but not necessarily relevant in the present. Interpol's Turn On The Bright Lights categorically belongs in the former category. A timeless artifact that many of their peers would spend the next decade and a half trying to match, let alone release as a debut, it is arguably the most influential guitar based album of this century. Yet at the time, it was heralded as a seminal record with little in the way of mass appeal, one that would only appeal to the band's (then) cult following. How times change. Released in August 2002, while the years may not have been so kind to many of Interpol's contemporaries (whatever did happen to Hot Hot Heat or Passion Pit?) Turn On The Bright Lights has gone on to attain reverential status. An era defining record that never once becomes tedious or overbearing no matter how many times it's been played. So with its 15th birthday celebrations well under way, there was no better time than now to embark on a long overdue tour to commemorate its most recent anniversary.

Having amassed a loyal following since Turn On The Bright Lights dropped unsuspectingly against a landscape of nu metal, earnest semi-acoustic acts and overhyped throwbacks to the 1970s, it's to Interpol's credit that their celebratory London appearance takes place in the vast confines of Alexandra Palace. While the venue is perhaps more synonymous with theatrical productions such as musicals than left field indie rock bands, it marks a hallowed rise in the band's status having initially toured the UK back in 2001 as a support act on the infamous toilet circuit. Despite never hitting the commercial heights enjoyed by fellow classmates of 2002 The Strokes, they've enjoyed a longevity very few acts from that era have sustained. Even occasionally in the face of adversity such as 2010's much maligned self-titled fourth album which also signalled the departure of original bass player Carlos Dengler.

Nevertheless, one fair-to-middling LP is a more than desirable return when pitted against four outstanding ones and with the band's sixth said to be near completion, Interpol look set to be a going concern for a while longer yet.

However, it's Turn On The Bright Lights we're here to celebrate, and even though some artists' full album shows have fallen short of expectation in the past it would be churlish to pass up on a rare opportunity to hear this record played in full chronological order. Taking the stage in their now customary attire of shirts, ties and suits, it's more a case of business as usual rather than dressing up for the occasion as far as Interpol are concerned. As Daniel Kessler plays the unmistakeable opening bars to the album's first track 'Untitled' the front rows sway in time to its simplistic melody as Paul Banks' dulcet tones deliver the mantra "I will surprise you sometimes / I'll come around", each and every word sung back by the politely assembled throng around us. In fact, it's possibly the most polite crowd I've ever been in which makes the serene nature of tonight's show even more plausible, if at times a little short on atmosphere.

A pulsating 'Obstacle 1' results in a little more movement out front which is just as well because the band are clearly enjoying their ninety minutes in the spotlight, Banks and Kessler exchanging wide eyed smiles during the song's instrumental breakdown. A flawless 'NYC' - the album's focal point back then and still to this day - comes next with its refrain ("It's up to me now, / Turn on the bright lights") raising hairs on the backs of several thousand necks in the process. What's remarkable about this record is that every song still sounds as fresh and invigorating as it did fifteen years ago and to their credit, its creators play them with the same vigour and panache that they did upon those first UK shows back at the turn of the century.

'Say Hello To The Angels' with its Smiths-like structure and 'Stella Was A Diver And She Was Always Down' prove to be undisputed highlights as does a fervent 'Roland', while 'The New' - essentially three songs trapped in the body of one - showcases Interpol at their most playfully adventurous, Kessler's guitar in particular veering in numerous directions during its elongated breakdown in the final third. Album closer 'Leif Erikson' and long time fan favourite 'Specialist' off 2002's Interpol EP bring the first set to a cathartic climax.

They return for a seven-song encore that sees them delve into both their past and future. New composition 'Real Life' bears all the hallmarks of classic Interpol with its brooding verses giving way to a very pop friendly chorus not that dissimilar to 'All The Rage Back Home' from 2014's El Pintor, which also features in the second set. Second long player Antics is well represented with 'Not Even Jail' and 'Slow Hands' in particular raising a round of cheers and flailing limbs from an audience that's finally come to life, while Interpol stand out 'Lights' and 'The Heinrich Maneuver' off third record Our Love To Admire, which celebrated its tenth birthday in July, ensure every one of the band's albums gets a share of the spotlight.

It's a fitting end to a prestigious evening celebrating one of the most definitive albums of its generation. With the lights turned on and shining brighter than ever, who's to say we won't be back in 2032 celebrating the big 3 0? Timeless.