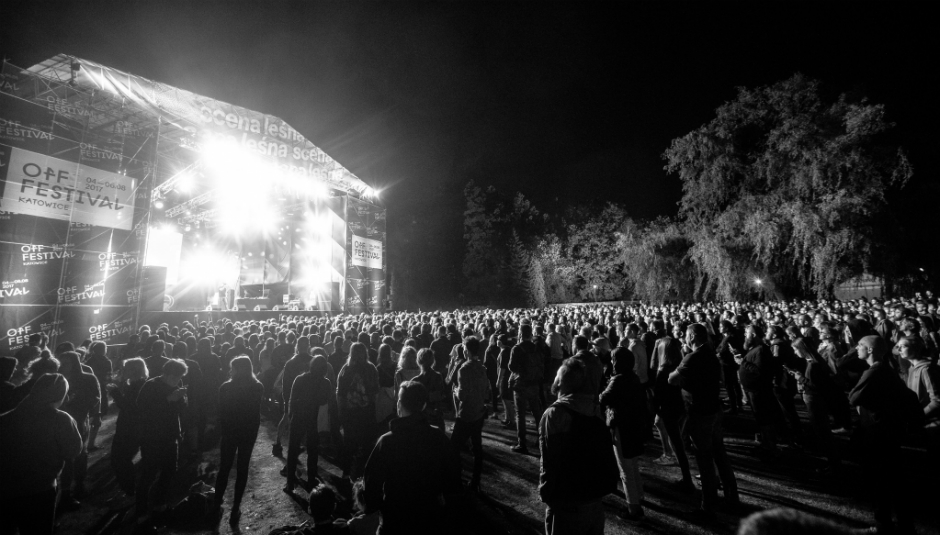 I’ve always been a believer that a festival review has the odd ability to reveal more about the music journalist than the festival she or he is reviewing. For one thing, the majority of festivals are now so broad and sprawling, no single writer could hope to capture the average experience at one without dashing like Superman between stages and taking a vow of silence to cut down on precious listening time. On the other hand, some festivals are so tightly controlled or expensive, they can become little more than junkets with crowd control and pricey Heineken. So what does OFF Festival say about me? Am I a lazy company man, a latent alcoholic, a disinterested ageing Dad-rock apologist?

OFF balances total freedom with control, the lineup large but not sprawling, and the beer as cheap as something off the pound saver menu while drinking itself remains limited to restricted areas on the festival site. The result is one of the best-curated festival experiences in Europe, and anybody who makes the trip to Katowice in south-west Poland won’t be disappointed. This year’s lineup is a veritable dream for the modern eclectic taste, with the likes of Wolves In The Throne Room, Idris Ackamoor, Talib Kweli, and PJ Harvey sharing a bill with underground Polish indie and experimentation, so I arrive on site already flipping mental coins to solve timetable clashes. Within hours I’m missing an act I wanted to see for another I’m getting sucked into…. All signs of a great festival already. 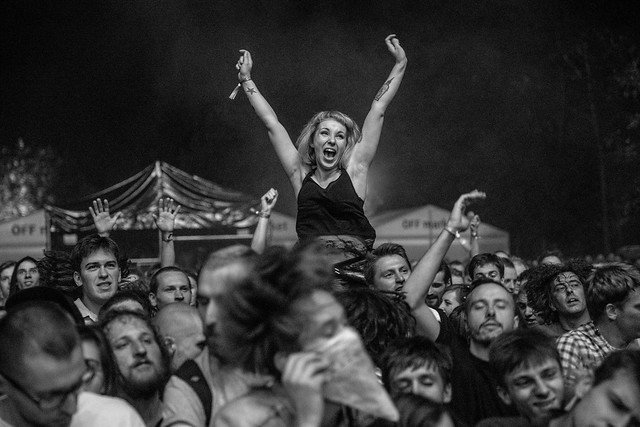 Built as a coal mining town, Katowice is at the heart of a larger metropolitan area in the southwest corner of Poland. The city itself though is anything but intimidating. A soft blend of concrete brutalism sits alongside a vast range of gothic and classical architecture, giving the city a uniquely broad visual personality amongst Polish cities. It makes for a lovely city break away, sampling beer and pierogi on the Mariacka street, visiting the excellent art museums, touring the mines - but we’re here for music goddamit!

Things begin subtly for me as we scope-out the site, gawp at how cheap the drinks are (something like £1.40 for a beer), and end up quietly staring doe-eyed at Polish guitarist Raphael Rogiński nimbly unleash an improvised array of staccato guitar rhythms and plucks. He’s sitting on the Scene Eksperymentalna (experimental stage - you’ll be tested on spellings at the end), curated by Michael Gira of Swans. You can see why Gira picked Rogiński too; his improvisations stem from the same bleak-yet-hopeful origins as Swans’ vast rock monoliths. I’m glad to see plenty of other Polish acts dotting the bill as well, and the country’s busy musical underground doesn’t let us down. Later the same day Trupa Trupa (an indie group from the coastal city of Gdańsk in the north of Poland) run through songs from their record Headache released last year. Frontman/poet/lyricist/singer Grzegorz Kwiatkowski is fittingly world-weary in character, putting all his energy into the dizzying heights of Trupa Trupa’s many anthemic (English language) choruses. Organs and swaying rock rhythms buttress the band through a thoughtful and inviting set on the main stage, a blueprint for the modern Polish indie band. 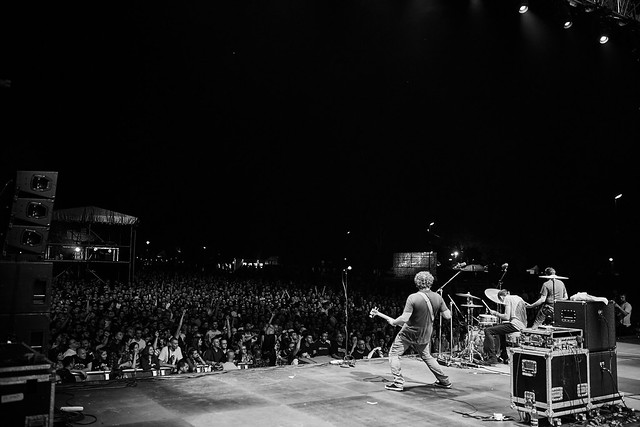 The opening day lends much time to the British and American guitar groups in attendance at OFF, notably leading to a storming set from Steve Albini’s still-razor-sharp-after-all-these-years trio Shellac. Along the way though, newer bands get a showing in the form of Brooklyn’s worst named band The Men and London’s marginally better named Ulrika Spacek. Both ultimately disappoint, the former painfully veering from some pretty banging Jon Spencer energy rock into a sub par country twang, the latter poorly emulating the neo-indie-psych of Tame Impala and fellow Londoners Toy. As has been the way for a while though, NYC and LDN aren’t the places to go for your rock bands. Bristol provides blinding sets in the form of Beak> (littering their set with Dad jokes in Westcountry accents) and the relatively new IDLES. The latter has so much goddamn furious punk energy they seem to risk collapsing the massive tent they’re playing in. The whole group stomp angrily around their instruments, guitars flying up in the air, and front man Joe Talbot ultimately crowd surfing his way over the crowd and right out of the tent. It’s an unashamedly angry display, and as everybody seems to agree, “damn, British people are pissed off”. Damn right we are. Sleaford Mods might be a good start, but IDLES are the band that truly embody our rage. They can’t take our country and our future away if we smash them to pieces first, IDLES scoring the whole damn fiasco. 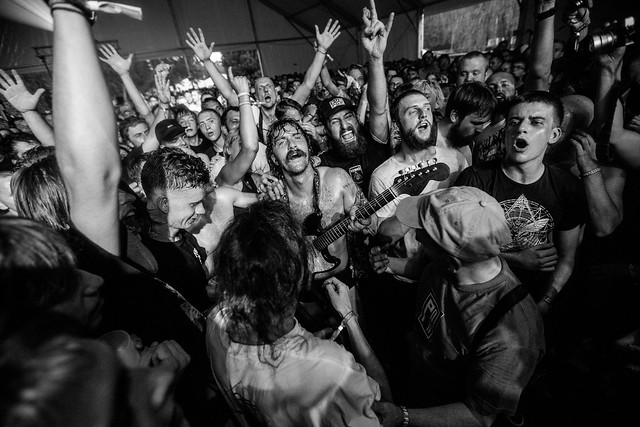 Canadian indie elf Feist then played a pleasant enough set for me to get in some proper time drinking beer and eating dumplings without feeling any of that nasty FOMO. She certainly seems extremely nice and she’s a great singer and all, so no problems there. The food was mwah too by the way. 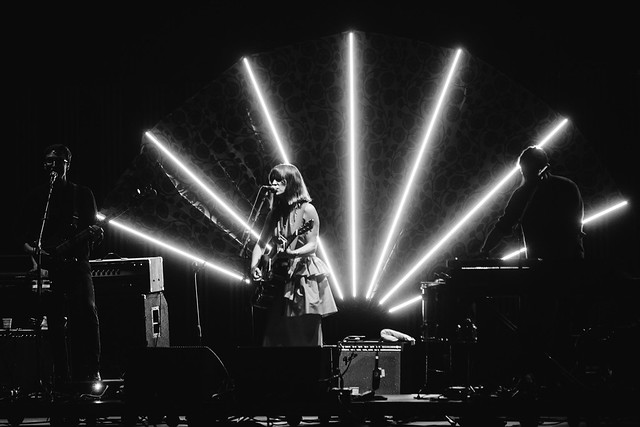 The eclectic nature of OFF’s programming really came out the next day. Hangovers nursed and a burning Polish sun well and truly out, the day featured Mauritanian singer Noura Mint Seymali on top form, really coming out of her shell getting an international crowd to clap and dance along to her energetic take on desert rock tinged with Afrobeat. Elsewhere in the day Jessy Lanza treated us to a deeply danceable set of nocturnal synth beats from her pop-perfect last two records. It’s worth noting that her set on the second largest stage came after Wolves In The Throne Room lit it up for a solid hour of brutal black metal and doom, punctuated by guttural screams and hidden behind a wall of dry ice fog. 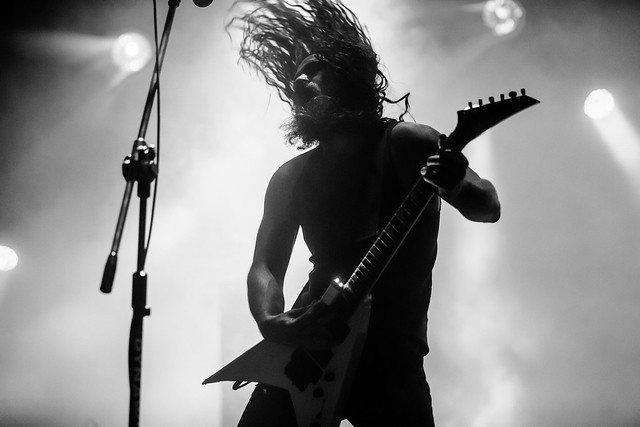 PJ Harvey and Richard Dawson seemed to somehow present us with two sides of the same coin. Both tell tales from a British society of the past, where sympathy and gentilesse were seen as noble attributes, it’s just that PJ Harvey’s doing it with a big band on the main stage while Dawson’s stripped back solo set takes place in a smaller sweatier tent. While the big band replete with multiple drummers and horns clearly fits PJ Harvey’s recent album, The Hope Six Demolition Project, it’s the small augmentations and treatments older songs get that make her set so extraordinary. Richard Dawson’s up close and personal, red raw performance style achieves the same heights by different means, even his oftentimes verging on harsh noise guitar instrumentals overflowing with emotion the man can barely contain. These two provide the two moments my eyes well up with tears, fuelled by a couple too many vodkas perhaps. PJ Harvey’s ‘White Chalk’ has always seemed to me a tale of growing up feeling trapped in small town, while Richard Dawson’s ‘Poor Old Horse’ seemed a tale of simple sorrow at the evil men do. At OFF though, surrounded by a new generation of young Poles living in a metropolitan liberal consensus their parents could have never imagined, both seem to be songs bidding farewell to Great Britain as she was. “White chalk hills are all I've known / Hear what they did to the poor old horse”. 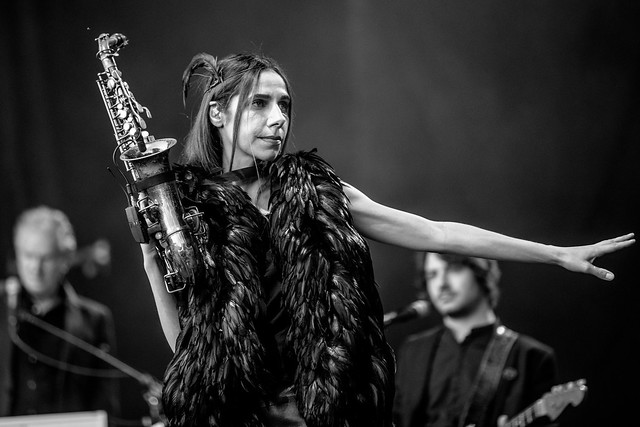 Thankfully Royal Trux and Talib Kweli are around to provide plenty of messy fun to end the evening. Though clearly on opposite ends of the slickness and professionalism spectrum, both make the perfect score to get down to some thorough ‘festivaling’. 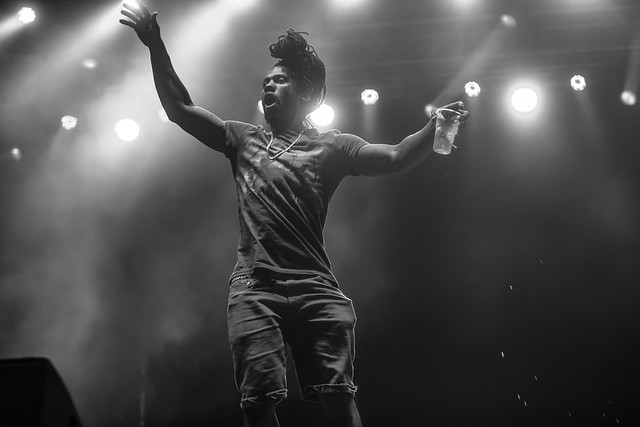 The final day sneaks up on me, yet there’s still so much to see! Young American songwriter Haley Fohr has been receiving increasing amounts of attention for her phenomenal Circuit des Yeux project, and quite rightly too. Her voice alone is a stunning enough tool - Yves Sumac meets Scott Walker levels of range and power - but in the context of Circuit des Yeux, Fohr leads a deep dark rock outfit ready to take on the world. To my surprise, later in the day, Conor Oberst (billed as Conor Oberst with Band) seems just as powerful. Not pulling out any of the better known Bright Eyes classics along the way, Oberst’s first ever set in Poland is a storming run through of classic Americana played with angry gusto by Oberst and his nimble band of young American white boys. They really kill it, Oberst bantering between sets about how Trump “and his disgusting family” are “motherfuckers”. The crowd don’t hold back their approval, and Oberst’s gifted lyrics shine through, even on straight forward blues rockers like recent track ‘Napalm’. Live, he’s infinitely superior to his relatively tepid recent albums, still representing a certain downtrodden Anglo-American youth. 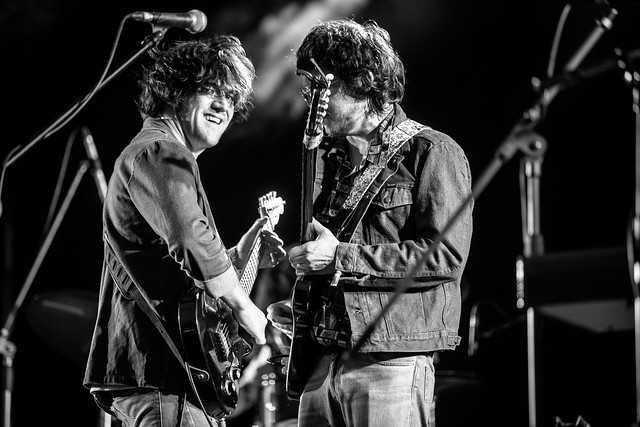 It’s a busy day, with Thee Oh Sees very shortly after Conor tearing our brains to pieces with a storming high energy set, John Dwyer helming the recent two drum lineup. It’s a hell of a trick, as two drummers in perfect sync add little sonically but visually the effect is phenomenal. Japanese legends Boris play their shoegaze-tinged sludge epic album Pink on the main stage, ultimately going through the looking glass during the twenty-minute closer ‘Just Abandoned Myself’, the group swallowed by guitar amp noise and epic volumes of fog. 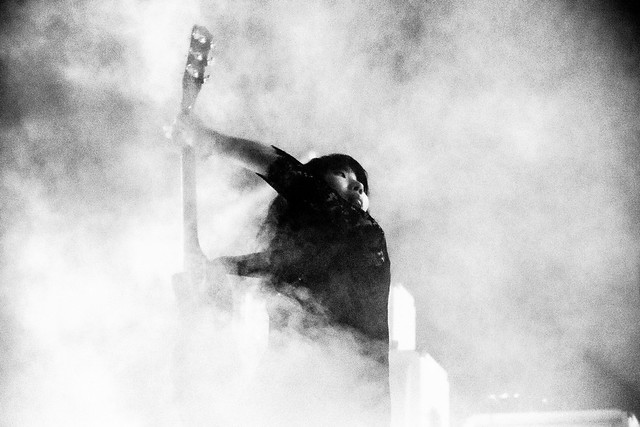 Most of the rest of the evening is taken up by Swans 3-hour set on the main stage. Most of it literally comprises slowly building and collapsing guitar strums punctured by Michael Gira’s Messianic chants. I’m not in the mood for buying it though. The vast melodrama of the epic Swans production seems unnecessary when you’ve seen IDLES do anything but masturbate their way through a set of meaningful, conscious, woke noise punk, or even had Conor Oberst talk directly to us. Maybe I’m just growing impatient with age, but I leave for some much-needed rest long before Swans finish. I guess that’s what OFF and this review reveal in me - I want to be entertained, and I want to hear something new, and OFF delivered by the bucketful. Let me put it this way: if a festival’s good enough for you to feel comfortable missing out an epic 3 hour set by Swans, it’s gotta be one hell of a festival.

Even An Ant Can Bite: DiS Meets Pussy...