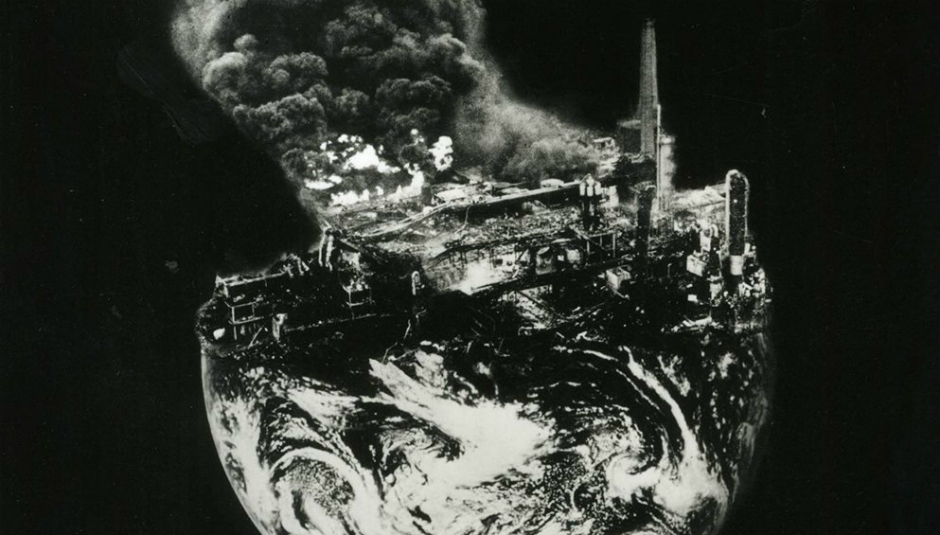 
‘Picture A Vacuum’ opens with spoken word and gradually focuses from the infinite. Blazing poetry. It’s scene setting, a tiny bit scary. The little chimes that twinkle behind it. The beat poet rhythm. It’s pretty descriptions of earth, it’s lovely, it’s pastoral, OH MY GOD IT’S GETTING DISCORDANT and it turns out we live in a dystopia and Jesus it gets really scary really quickly.

From the peaceful emptiness of space to a chaotic “What am I to make of all this?” This is a hell of a scene setter. Think we might be in for something special.

The discordant hip hop and sinister synths of ‘Lion Mouth Door Knocker’ just underlines the point. We know straight away that a ton of stuff is going on here. Rhymes coming at you quickly, imagery of a breathless, depressing 4am city snapshot.

It’s very difficult to do a liveblog review of an angry poetry hip-hop record, it’s coming at you so quickly and has moved on before you can gather a thought. And I don’t want to take my mind off these words to write, because they’re glorious, brilliant words, Kate Tempest introducing us to the seven people awake on a London street, whose lives I assume we’ll be visiting.

I’m jigging in my seat. It feels weird to listen to this music in such isolation. Tempest floods her beats with words, her words with meaning, and her meaning with beats. Fuck me, this is really good.

‘Europe Is Lost’ you might know, an almost compulsory Brexit kicking anthem. And that’s only right. Even Mick Jagger’s got one. This is about a hard working immigrant who’s “worried all the time”, and who can blame her? The twitchy, clockwork monster beat is really compelling.

Wait, maybe this isn’t about Brexit?

I know I should keep this snappy, but you could write an essay on every line here. “Even the drugs have got boring / The sex is still good though”. Lists of everything that’s wrong with this bloody awful world. Pretty sure a Cameron pig-fucking reference just flew by. Pigs do that, I’m told.

This is like being waterboarded by a relentless world. Clever. Tempest is not happy with the state of the world, the state of young people, the state of our lives. Can’t say I blame her.

‘We Die’ feels more personal. More of a specific character study. It’s heart breaking. About memories and people and horrible things that don’t fade. “So many idiots alive and kicking”- that could be a theme for this record.

There’s a lovely moment on the chorus, “I heard your voice last night / I don’t believe ghosts” that hard pans to either side of the speakers. Lovely touch. “The point of life is to live / Love if you can and then pass it on”. Amen.

‘Whoops’ is a bit more knowing, a bit more fun. I tried to get more thoughts together on this, but Kate has already moved on. “Whoops, back here again, dancing to a shit tune, hands in the air when it hits you”. Brilliant. There was a better line about depression straight after, but I was too busy transcribing to catch it. It was good. There’s a little hyper, coked-up ode to the joy of poetry that just zipped by. Again, this is great. It’s all great. This is a great record.

‘Brews’ gives you a brief moment to stop (have a cup of tea? No time Bruv) before ‘Don’t Fall In’ with its hard beats and chip-tune bassline is pushing you again and you’re a mile downstream. ‘Don’t Fall In’? Way too late, love, I slipped up ages ago and I’ve stopped fighting the current.

It’s hard to soak in everything here, but if there’s one theme that comes up again and again it’s that people are better than their situation. That the world’s fucked, but the people are brilliant.

‘Pictures On A Screen’ has a dream-like quality. The story of a PR, a “Manchester boy done good in the big smoke” who’s “Living the dream”. I get the impression he’s not any happier than anyone else though. You can tell he’s lost by the phasing, lonely washes of synths. By the way the little riff doesn’t quite match the beat. “I know it’s happening, but who is it happening to?” Presumably that’s just life. Jesus Christ, I think this one’s about me. I mean, I’m not a PR or from Manchester, but I’m a journalist from Leicester and I often feel lost like this. HOW DOES SHE KNOW? KATE, HOW DO YOU KNOW HOW THIS FEELS?

As it fades away I can hear someone in my office playing James Brown’s ‘Living In America’ and it’s like dipping out of my dream into someone elses.

“The squats we used to party in are flats we can’t afford.” That’s a great fucking line, isn’t it? This one feels a bit lighter, or at least as light as this record gets.

‘Perfect Coffee’ is an anthem for anyone who's ever gone home and felt lost. Tempest has squeezed 2017 living into this record. It’s staggeringly good. Musically it shifts and moves constantly, sometimes it’s bonkers, sometimes it’s spares. It works so well.

“The tube is a battering ram full of passengers”, fuck this woman can WRITE. “We’re Sisyphus pushing his boulder / The kids are alright but the kids will get older.”

‘Grubby’ is a fidgety groove about another lost girl. They’re all lost here. We’re all lost though, aren’t we? I love how Tempest moves from the big to the small problems and makes sure we know how linked they are, how one affects the other. How painful daydreams can tear down your day.

‘Breaks’ reaffirms the themes – the lost souls at 4am, the storm breaking outside. The storm that pricks the pressure. Community in misery waking up. The power of PEOPLE over this horrible world we’ve created and perpetrated. “Shocked and laughing, soaked to the skin”. It sounds wonderful, and the squelchy beats have moved to a major key. I’ve avoided the comparison, but it’s kind of how The Streets ended A Grand Don’t Come For Free, musically if not thematically – but this is way cleverer, way subtler, way more emotive.

“Staring at the screens so we don’t have to see the planet die”. That’s pretty blunt, isn’t it? We’re into the closing ‘Tunnel Vision’ now, cementing that central theme. That we need to be shaken out of self-indulgence and clockwork repetition of life. Crucially though, Tempest understands the comfort in those circles.

“The sickness of the culture / The sickness in our hearts”... fuelled by the “distance that we share”. We’re not off the hook here. “It’s up to us to make this place a better land”. “The myth of the individual”. “I’m screaming at my loved ones to wake up and love more”.

The musical end notes, the grace notes, they feel quite positive over the urgency of the beats. I guess there is positivity here in the community. In real people. In our lives. We just have to fucking notice it, cherish it.

Silence. It’s finished. I am wrung out.