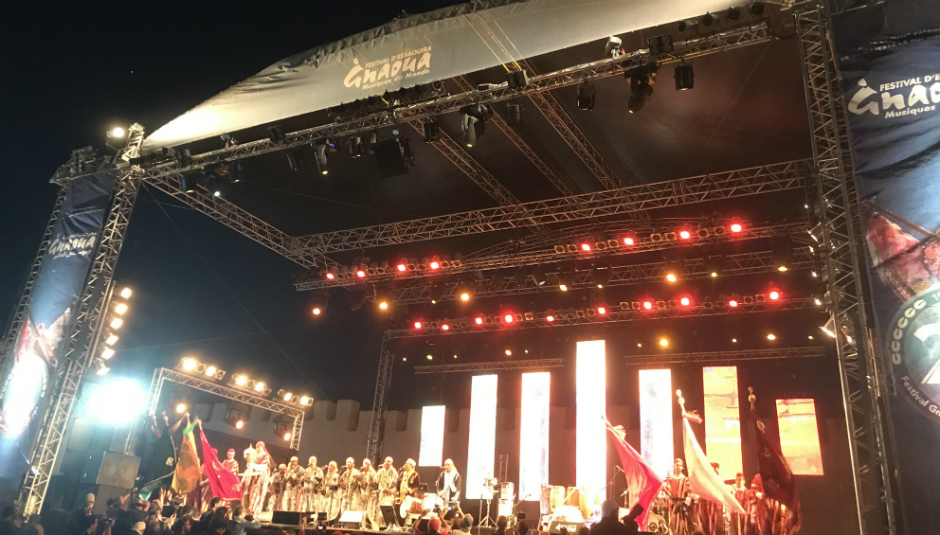 If, like me, you fancy an alternative (escape) to mediocre indie bands, electronica acts, or anything resembling a political and social justice movement, you could do a lot worse than head to Morocco for a long weekend. The North African country boasts itself as being a real up-and-comer on the festival circuit throughout the year thanks to guaranteed sunshine.

This year’s installment of the Gnaoua Festival is a showcase of traditional Moroccan Gnaoua as well as world music over three days, which takes place in the small fishing town of Essaouira, 3 hours to the west of Marrakech on the Atlantic Coast. And what with it being the 20th anniversary this year, there is extra cause for celebration.

For a more clearly defined meaning to Gnaoua, it is a deeply spiritual musical genre dedicated to healing in prayer within the mostly Sufi Muslim sect in Morocco and sub-Saharan West Africa. Typically, a song will repeat the same structure and phrase over and over again for minutes, sometimes even hours. The groups are led by Maa’lems, who are highly revered and respected musicians, and even have superstar as well as saintly status in Morocco.

This year, it was estimated that 300,000 people will descend on the town for the festivities. And this is reflected by the fact that a) there is no water pressure when it comes to running taps to have a shower (for that real festival experience) and b) extra security every which way one turned in the town.

For a small town such as Essaouira, you’d expect a grand affair what with Gnaoua being the biggest event of the year. And it’s quite a spectacle: there are traditional Gnaoua players that line the streets with Krabeb cymbals, Gimbri basses, and traditional African drums. And that's just the opening ceremony parade.

The great thing about Gnaoua Festival is that all the events take part late in the day, with acts opening up at around 7pm, which means a lot of time on my hands. For the most part, I spend it taking surfing lessons (big up Imad and all at Explora) first thing in the morning, napping in the afternoon, and going to concerts in the evening.

Once the festival proper gets under way, save for the speeches in Arabic and French from local dignitaries and festival officials, the main attraction of this year’s installment is Brazilian legend Carlinhos Brown. He's joined by the band of Gnawa, who mix rock, blues, jazz and traditional Gnawa music. Brown is no doubt the face of this year’s festival as he also performed a set and a Q+A at the Institut Francais, as well as the closing ceremony.

Former child prodigy and current legendary blues musician Lucky Peterson plays what you would call a game of two halves. The first is mostly covers of Prince and other American luminaries, the second half was played with a fusion of Gnawa led by Maalem Mustapha Baqbou.

Other highlights at the festival included a blistering set by Ismael Lo, who proved a great entertainer with his stage presence and audience involvement, Marsa Band with energetic Gnawa, and the omnipresent Carlinhos Brown who seemed to be everywhere you looked in Essaouira.