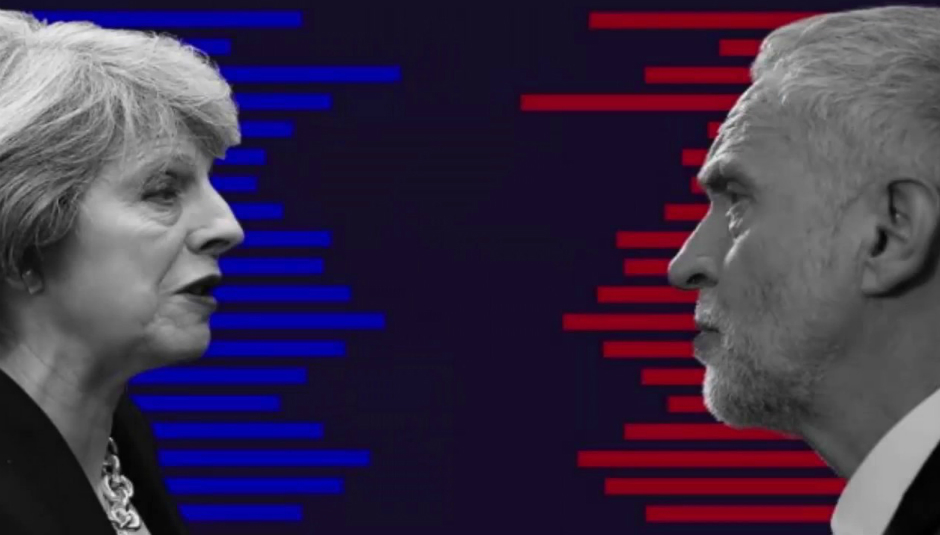 We're nearly there, a date with destiny, and an election that, more than any other in living memory, feels like a battle for the United Kingdom's very soul. On the one hand, Tory austerity, a hard Brexit, and a seemingly never-ending torrent of bland statements and empty epithets that lay the ills of the world at the door of just about everyone else who has not been in power these last seven years. And on the other, Jeremy Corbyn, a man much derided during his leadership, and one who has made more than a few mistakes, and yet has somehow emerged statesmanlike, and been steadily eroding the Conservative's lead in the polls over the last few weeks and days to the point that the impossible might actually become reality.

Who knows what's really going to happen? Who know's where we're headed - as a society or as a country? One thing's for sure, it feels that in the years and decades ahead, the 2017 election will go down as a pivotal moment in history, and one can only hope that the eventual winner, and all who vote for them, land on the right side.

We asked our writers to come up with songs that, for them, sum up the state of the nation, politics, and this election, and why they believe them to be so relevant. Here's what they chose.

Soooooo I might be from the US, but I get how the UK severed itself from the EU. Our Dixie flag-flyers and MAGA cultists wish for the same “pure” (read: all white) state that your extreme nationalists want – and they’re the ones who jumped with both feet into the most backwards elections that both of our countries have ever endured in ages. But English nationalism is even further entrenched - and to a degree, even more absurd, as Hey Colossus so righteously point out: “Whoops the empire slipped between the cracks / The stuff of legend and it’s never coming back”. Those that hold onto this archaic ideal, they assert, are pathetic waifs that deserve to be crushed – and that’s exactly what “Englishman” does. Well, in a conceptual sense. But fuck me, how sweet is the sound of that squelch right now, eh?

Lanterns On The Lake

'Another Tale From Another English Town'

Years ago, I interviewed Billy Bragg and asked him the same question as everybody else who’s ever profiled him: “Where are all the political songwriters these days?” A few months later, I had my introduction to Lanterns On The Lake in the form of Until The Colours Run, their second record. Newcastle, it seemed, was the answer to my previous question, assuming this lot are anything to go by. Both that LP and its 2015 follow-up, Beings, are quietly devastating affairs that tackle the ruinous legacy of years of Tory austerity as incisively as any political commentator. ‘Faultlines’ and ‘Through The Cellar Door’ are essential listening on that front (both are on Beings) but it’s ‘Another Tale From Another English Town’ that’s stayed with me most indelibly.

Two years ago, I spent election night with other journalists at a count in North Manchester and if you thought that exit poll was a kick in the bollocks when you saw it come out at home or down the pub, imagine watching it slowly become agonising reality (and then worse) in a room full of braying Tories. ‘Another Tale From Another English Town’ speaks really beautifully to the feeling that’s continually enveloped so many working-class communities in this country these past seven years, which is one that isn’t as outwardly obvious as the ugly anger of the Leave campaign - one of lethargy and fatigue at having had the shit kicked out of you in the name of ideological austerity for so long. Aching vocals over fluttering violins - “We just want the quiet life, but they won’t stop til they see us in the ground.” Gut-wrenching.

'Up Past The Nursery'

Look around you. Everyone is apathetic, worn out, and/or a little bit confused. There’s some anger knocking about here and there, but it seems diluted and quite frankly half-arsed. Maybe, and this is just a theory, but maybe, the government has been pumping ‘Up Past The Nursery’ by Suuns into our earholes each night to turn us into apathetic, yet slightly fuming zombies.

It sounds mad, but it kind of makes sense. The track is perfect for this type of manipulation. It invites you in with 4-to-the-floor beats and chirpy plucks before hitting you with Ben Shemie’s aggressively restrained whispers. Have a listen now. You’ll be apathetic, worn out, and/or confused in no time.

George Osborne might now be perennially confused about the role of the art director at the Evening Standard, but he was once the poster boy for crippling austerity measures that are still biting today. Last year Chester trio Peaness wrote a brilliantly buoyant indie-pop number centering on Gideon and the omnishambles of the Cameron era. Even though it’s about the ex-Chancellor, ‘Oh George’ also doubles as something of a timeless commentary on the pervasive lies of the Tory government and the way that “you only think of your own.” Theresa May might be peddling the idea that we can go “forward, together,” but Peaness highlight that there’s only a select few making that step towards a brighter future.

The swerving, pulsating distortions underpinning this Kid A track are unmistakable. In an age of uncertainty, Thom Yorke’s seventeen-year-old calls of “We’re not scaremongering, this is really happening” are ever more relevant. Working out who to trust in an age of information over-saturation is tiring, but Yorke is shouting “Ice age coming, ice age coming”, just as Donald Trump abandons the Paris climate agreement. I know who I would prefer to stand behind.

The cataclysmic breathlessness on the version recorded live in Oxford, and which appears on 2001’s I Might Be Wrong, is even more suitable for today’s confusion. Swathes of noise wash over you until raucous sonic turmoil is all that’s left.

I picked this track before heading out to Primavera Festival in Barcelona last weekend where I didn’t even realise Kate Tempest was playing. Standing there watching her perform, amongst a multicultural, international crowd of different ages, faiths, backgrounds, genders, ages, and sexes all united by music, it really hit home how sad, isolated and empty life would feel without all that rich variety of humanity. It also epitomizes the ridiculous narratives we’re forced into following instead of addressing the deep-rooted underlying issues with our society and the broken model of neo-liberalism we’re clinging to.

“Top down violence and structural viciousness, your kids are dosed up on medical sedatives, but don’t worry ‘bout that man, worry about terrorists. The water level’s rising, the animals, the elephants, the polar bears are dying. Stop crying, start buying. But what about the oil spills? Shh no one likes a party-pooping spoilsport. Massacres. Massacres. Massacres. New shoes.”

Enter Shikari, particularly Rou Reynolds, have been pretty political since their second album Common Dreads. The difference with ‘Anaesthetist’ is that it actively saw them start to tackle a particular issue head on - namely the dismantling of the NHS. So many bands find it difficult to tackle topics like this with any sort of credibility but they show it can be done. It's a big part of why they're an arena act now - people identify. “You will not profit off our health” indeed.

It might be the blatant naïveté talking, especially being a white and privileged person myself, but 'Move On Up' always struck me as the most feel good protest song imaginable. Congruent to Curtis Mayfield's hyperreal narratives of disenfranchised Black America, 'Move On Up' is a jam of compassion that reaches out and includes all. 'Enter the steeple of beautiful people, cause there's only one kind', he tells us with that signature honey-sweet voice. Chasing sanguine dreams within a backdrop of stark survivalism is as much a form of revolt as anything. You can "bite your lip", just don't let the bitter taste poison you. Nerdy side note: that percussion bang at the two-minute mark is my favorite second in pop music history.

'Cunts Are Still Running The World'

When I was younger, I never really voted that much. I was a massive twat, for this is the result: underfunded public services, racial divides, and religious intolerance; people who work three jobs and still live below the poverty line; a government that piles mountains of shit on the backs of the poor and then blames them when they collapse. Jarvis Cocker’s ‘Running The World’ was released 10 years ago, and even then he was seething at our lack of progress. I saw a YouTube comment that aligned this song with John Lennon’s ‘Imagine’, which made me unbelievably sad. The worst part is, we deserve it.

It’s hard to imagine a more apt hymn for troubled times than The Jam's ‘Going Underground’, the lyrics of which seem oddly prescient (or maybe just timeless). “To buy nuclear textbooks for atomic crimes” – Trident: “Some people might get some pleasure out of hate” – the rise of UKIP and Brexit: “Some people might say my life is in a rut / But I’m quite happy with what I got” – David Cameron's 2010 claims about “aspirational Britain”: “You’ll see kidney machines replaced by rockets or guns” – the dismantling of the NHS: there’s barely a line that can’t be read as a scathing critique on some modern malaise.

It's saddening to think that, thirty years on, the same issues are being debated, the same battles needing to be fought. If only we had such an eloquent "angry young dude" on a par with Weller to unite behind, and to truly act as a focal point. Of course, you could argue that even a stunning sequence of articulate, politicized Jam singles – ‘In The City’, ‘Bricks And Mortar’, ‘Time For Truth’, ‘The Eton Rifles’ – failed to dent the rise of Thatcher and one of the bleakest decades in recent history, but we live in hope; maybe this time it will be different.

"The best way to scare a Tory is to read and get rich."