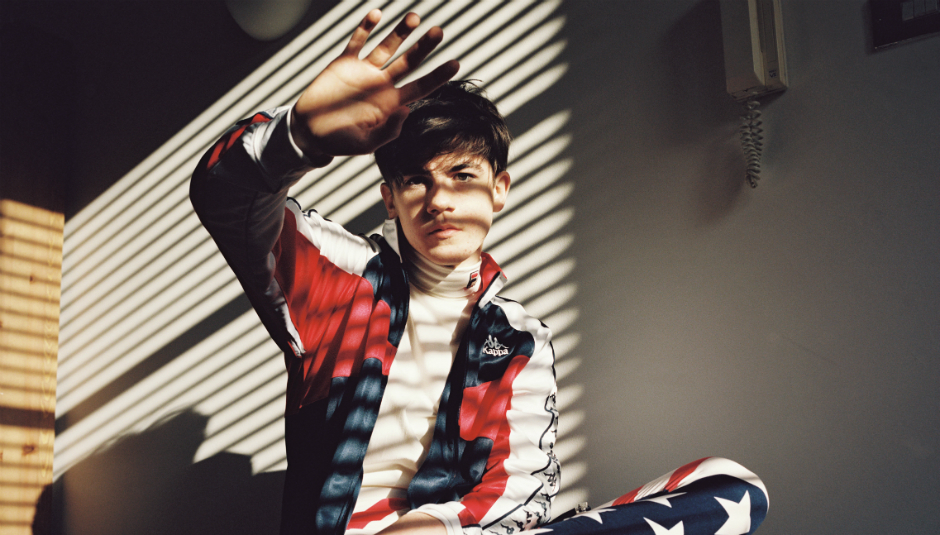 I pick up the phone to speak to Declan McKenna on Tuesday 23 May, the day of his biggest headline show to date, at London’s Heaven. When I put a list of questions together the previous day, little did I know I’d be up until the early hours following the news updates of the Manchester terror attack outside an Ariana Grande concert.

What to say for such an attack? I can hardly ignore the atrocity which has, once again, struck out against enjoying music and having the freedom to dance. Just before I speak to McKenna he tweets, “In response to those who’ve asked there will be absolutely no cancellations tonight or any other shows on my tour under my control.” His answer is to carry on moving and living, as he articulately tells me. “It's a time for not showing any fear for that sort of thing. If you talk about the perpetrators too much then we have an element of knee-jerk politics that comes into it. People will try and use it like a tragedy for their own political gain. It's not a time for pushing politics. It's a time for everyone to come together, regardless, and just try and move forward from this. Mourn, be sad, but don't be scared.”

McKenna’s response is as professionally put as you’d expect from listening to his eloquently political guitar-led indie pop. But this musician is just eighteen years old. His debut album, What Do You Think About the Car? is finally due for a July release after the wave of excitement that followed 2015’s ‘Paracetemol’ and ‘Brazil’, the former discussing issues of transgender visibility, the latter corruption in FIFA. The Hertfordshire-born musician stands as a shining political light amongst musicians singing stories of one-night stands or mad nights out. And the best thing? He’s getting young people excited along with him.

He may have still been wearing his school uniform when he met with prospective management, but McKenna’s youth is not holding him back. He is resolute in his political beliefs in the public sphere, bad-mouthing Theresa May on Twitter and rightfully adding his voice to the debate surrounding Thursday’s general election. Of course, he’s not the only musician backing the Labour Party in this election. The success of #Grime4Corbyn cannot be overlooked, and McKenna is glad he is in good company.

“I'm really happy that Grime artists who are massively influential on UK culture at the minute are taking politics into their own hands and trying to get their fans to have their say, and to vote. If a young person sees JME saying that they should register to vote and that it's a really good thing to do, then it's much more likely that they're gonna do it. JME is someone they admire, and think is cool, and they can actually connect to, via music, rather than a politician or a teacher who has nothing in common with them. It really does make a big difference.”

Twitter legend has it that when McKenna mentioned Thursday’s general election at last month’s Heaven show, the crowd responded with chants of “Corbyn! Corbyn!”. McKenna has a measured response when I ask him of his opinion on the chances of a Labour victory. “I think the only way he has a chance is if people actually choose to just back him. You can analyze all you want, but I think the only thing that really matters beyond the polls, beyond anyone's opinion piece or think-piece, is just how many people turn up on the day and vote for him.”

McKenna admits his view is “simplistic” – but it is undoubtedly practical. Although very aware that he is under no obligation to do so, he sees his political expression as “a chance for artists to do what the government isn’t doing.” In fact, McKenna is down-to-earth enough to realise that it probably pushes some people away from his music. But this grounded rocker won’t let that stop him. Fans are important, of course, “but for me, this is much more important than that. If I can have an impact on people and get them interested in voting, that's way more important than anything else I can do as an artist.”

This political outlook seeps into the nuanced delight of his music. He admits he’s “got a tendency to step away from the indie” with which he was initially associated. You know – young lad, plays the guitar, has some things to shout about. Instead, McKenna sees his direction as having taken a turn “somewhere between David Bowie and ABBA.” The last two songs he made for the album, ‘Humungous’ and ‘Make Me Your Queen’, certainly ring true to this. ‘Humungous’ has a huge switch-up, jumping from jolty guitar pop to a synth-fuelled dance track while ‘Make Me Your Queen’, on the surface a lovelorn pop song, toys with expectations of gender and a kick-drum-loaded eighties-style dance riff.

While his politicised lyrics are important, this ear for offbeat rhythmic tricks is just as much a fuel for his music. “Sometimes the same tempo isn't gonna cover it for the whole song. Or you have to change the key, to display what you wanna display. I listen to a lot of Tom Petty and a lot of the time it's more about carrying the words that you have with the actual sounds rather than overpopulating it with lyrics and focusing too much on that same structure. You want to carry what you have and the ideas behind a song with the actual melodies.”

The cover art to What Do You Think About the Car? shows a close-up headshot of McKenna, sweaty and bedraggled. His hair is sticking to his face, eyeliner smudged under his eyes, the silver chain which could have been merely hanging around his neck instead caught between open lips. I tell McKenna that I think it’s very new-look Harry Styles, all serious and wide-eyed raunchiness. He laughs, which I take to mean he doesn’t mind the comparison but prefers to compare himself to an all-the-more prolific star. “I just wanted to make an album artwork that looked like a ‘What would David Bowie do?’ kind of thing.” And it shows.

Recent critical comparisons between Styles’ new look and Bowie are not lost on me, either; I’m not embarrassed by my initial reference point. Following artists such as Christine and the Queens, Ezra Furman, and Perfume Genius, McKenna and Styles are ignoring gender expectations of dress and going onstage wearing exactly what they want. McKenna certainly takes a leaf out of Bowie’s book: he wears heavy eyeliner, glitter, playful dungarees or bright leggings. And it’s brilliant.

Where he is keen to pull on an outfit for a live show, for this album cover, his exposed face is the serious symbol. “I wanted it to look like I'd just stepped off stage, and I'm sweaty and a bit gross. I see myself as a pop musician. In pop, there is a massive tendency to be really fucking beautiful and perfect, and have no spots ... which is great. If people have an artistic vision of how they want to look and appear – that can be a really artistic thing, really cool. But for myself – especially having quite a young fanbase – I wanted the artwork to be somewhere between how I would look on a night out, me being a little bit gross, and looking sweaty and worn out. I try and avoid the photoshoppy and artificial tendency there can be to artwork, with making yourself look ethereal.”

‘Pop’ is a word McKenna repeatedly prescribes to himself in our conversation. He’s right: he has a young audience, his music makes people sing and dance, gets them feeling riled up about something, and he plays these catchy melodies to large crowds. That sounds like pop to me. Or, in his own words, “I’m not like Sufjan Stevens or Beethoven, so it kind of is pop.”

Despite the success which is rolling up and down and gathering speed with every show – after an eleven-date UK tour, numerous European shows, and a summer including Glastonbury, Latitude, Reading and Leeds on the horizon – McKenna is still very much the down-to-earth teenager. He admits to me that his best songs are still the ones he writes in his bedroom. “I think it’s all about being comfortable. And that’s what my music is about. It’s about being normal and being human and being fallible.”

What Do You Think About The Car? is out on the 21 July via Columbia Records. For more information about him please visit his official website.

"This time round we know how it works...