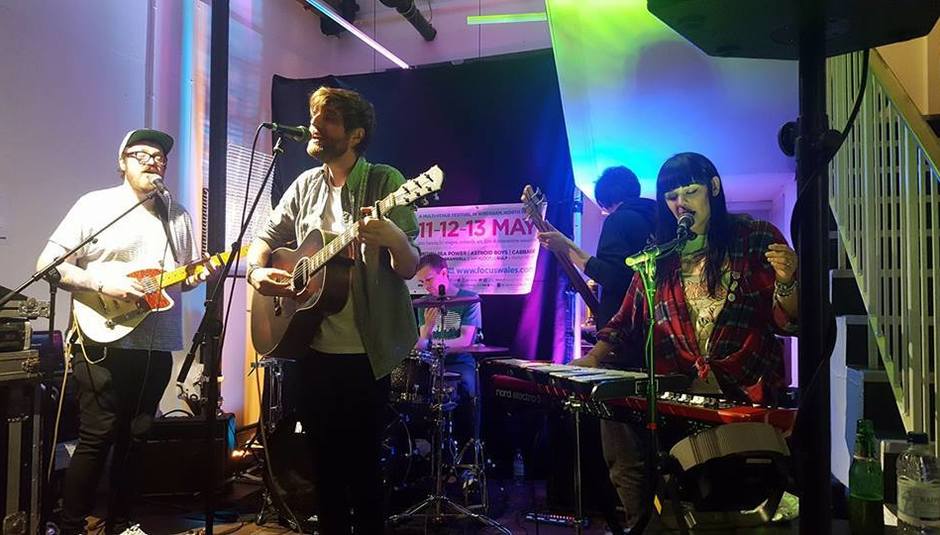 Now in its seventh year, Focus Wales goes from strength to strength establishing itself as one of the world's leading music showcase events. With delegates and artists travelling from places as far and wide as Canada and Korea, what started as a celebration of Welsh music has become an all-encompassing festival of music, comedy, and art showcasing some of the finest acts from around the globe.

Once again, the festival takes place in the town of Wrexham, a place diminished three decades ago by high unemployment largely caused by pit closures and a declining infrastructure around it. With a supportive government and arts council willing to invest so much time and money into revitalising the town, the economic benefit of Focus Wales has been vital to the local community since its inaugural event in 2011.

Having increased the number of participating venues to eighteen this year (with even more in the pipeline for 2018 so we're told), playing host to over 100 acts, the 2017 edition could arguably be considered its finest yet. Interactive sessions and panels ranging from "Meet The Booking Agencies" and "What's In A Song?" to opportunities for musicians in the games industry attract large audiences to fill the daytime slots while live music dominates the evening.

First on our agenda is Sera Owen, an artist DiS first came across at last year's event. Having encountered a number of technical problems in Saith Seren back then, her set in the ornate surroundings of St Giles' Church works perfectly. Fusing traditional folk with occasional pop leanings, her set is both heartwarming and soothing in equal measures. Meanwhile, over in Rewind, Canadian four-piece Lab Coast play indiepop as it was originally intended to sound back in the mid to late 1980s. Which is fine by us even, though very few people are there to see it.

Back in the church, local outfit Golden Fable have enlisted the services of NEW Sinfonia and their collaborative, largely orchestral set also hits the spot with those sat sedately in the pews. Next up is a double helping of Canadian electronic pop courtesy of Youngblood and LOA. While the former channels the spirit of Lana Del Rey or Lorde backed by a three-piece band whose sonic persuasion ranges from M83-style soundscapes to the deft arrangements of Phoenix, the latter takes on a colder, more industrialised version. Fronted by one Jessica Burnett, her onstage demeanour mixed with the surrounding sonic palette reminds us of Gwen Stefani fronting The xx, which when all's said and done is no bad thing.

Sandwiched in between, Georgia Ruth's inimitable experiments in sound and vocals prove captivating, fully demonstrating why she's been held in such high regard since winning the Welsh Music Prize back in 2013. Despite attaining headline status, Astroid Boys are a bit of a strange phenomenon, their odd mixture of grime, hip hop, and metal having more in common with Goldie Lookin' Chain than Stormzy or Rage Against The Machine. Nevertheless, they attract a large audience and judging by the pandemonium out front on the Central Station dancefloor, will be around for a while yet.

However, it's left to Chester's CaStLeS to own the first day and emerge as its true headliners in the process. Last year's debut LP Foresteering might have gone unnoticed having been released in late November around the time of the Christmas rush, but their live show has come on a treat since DiS first witnessed them in the very same venue almost a year to the day. Psych and math rock nuances interact and collide while a whole room throws all kinds of shapes in response. Although it's still only early days in the band's fledgling career, CaStLeS' potential is enormous. Today North Wales, tomorrow the world!

The next day, Edinburgh label Song. By Toad provides a double whammy of heartfelt folk and fuzzy lo-fi to set us up for the evening. Playing a solo show here, Meursault's Neil Pennycook is both captivating and menacing, at one point leaving The Rock Suite as recent album title track 'I Will Kill Again' reaches its ferocious climax. Fellow Scots Lush Purr take a more subtle approach, albeit in a slacker vein, their grunge-infected guitar pop similar to the likes of Teenage Fanclub or The Pastels.

Campfire Social also delight with their charming mixture of melodic folk and scattergun punk pop while Austrian shoegazers Molly offer an ethereal and occasionally angelic diversion. More North Wales goodness arrives in the shape of Mowbird, whose good time lo-fi pop sets the scene impeccably for Winter Coat's dreamy polemics. This evening's headliners Cabbage open with a new song that follows the ramshackle yet industrious nature of most of their output and while their stage presence has clearly been affected by the online allegations stemming from last month's show in Kentish Town, they manage to attract a healthy sized crowd, most of whom sing the words back to every song the band subsequently play.

New Orleans artist-cum-producer AF The Naysayer's heavy beat-laden hip hop takes us into the early hours. His diverse fusion of sonics and samples proving both intense and educational while reminding us of MF Doom or Dälek in the process.

With Saturday comes an inimitable blast of sunshine, and Wrexham duo The Contact High deliver a soundtrack to match. Elements of krautrock mix and match with errant psychedelia and driving post-punk that makes their instrumental aural assault insatiable as a result. Nottingham trio Eyre Llew are also a revelation having overcome technical issues at the start of their set. Once in their stride, 'Atelo' and new song 'Bloc' highlight just why they're one of the most heavily tipped outfits on the showcase circuit this summer, while closing number 'ECDA' is sure to become a festival anthem for years to come.

Fellow East Midlanders Crosa Rosa also unleash a set of incendiary poise and vigour that channels the spirit of Sub Pop legends Mudhoney and present day psychedelic grunge outfit The Wytches. Around the corner in Central Station, Seazoo's gallant post-punk paves the way for headliners British Sea Power, and the Brighton-via-Kendal sextet return the favour by delivering one of their finest hours in many a year. Playing a career spanning set that peaks on a now rare run through of early single 'Spirit Of St Louis', they're a delight to watch on this form reinforcing their status as national treasures in the bargain.

Islet's set in former Sports Direct warehouse Un Deg Un also takes some beating, their psychedelic meanderings both dancefloor friendly yet equally as suited to a rock arena too. Ultimately, their energetic performance provides a fitting finale to a weekend of festivities that can only bode well for the future.

Dams Of The Upper West Side: DiS Meet...