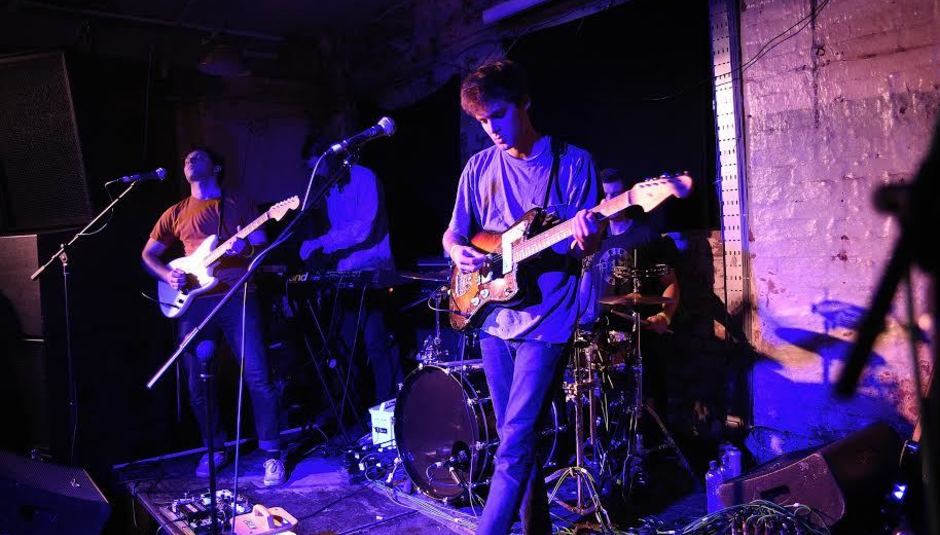 DiS went to Dot To Dot festival over the Spring Bank Holiday weekend, calling in at Nottingham on Sunday 29th and Manchester on Friday 27th May. Here's our two writers' Harriet Williamson (Manchester) and Dom Gourlay's (Nottingham) main highlights.


The Soup Kitchen basement proved much too small for everyone who turned out to see Day Wave, AKA Jackson Phillips, and his band from Oakland, California. People were packed into the suffocatingly hot underground space, with more queueing on the stairs. Day Wave’s winning formula is the pre-chorus drop, then the glorious swell as the tune resurrects itself and leads into a wickedly catchy chorus.


Meadowlark are not just a vehicle for former YouTuber Kate McGill, they’re a darkly atmospheric folk outfit that are well worth a listen for fans of Laura Marling and Bright Eyes. They already have a substantial cult following, with a new tour starting in September. Unfortunately, the venue’s sound system and the noise of a crowd insisting on carrying on their own conversations did much to cover and blur the sweetness of her voice and the bright, heady guitar.


Sheffield-based Baba Naga played another packed venue, with festival-goers crammed into the doorway and on the stairs throughout their set. Your reviewer was unable to actually get inside the room or see what the band looked like, but enjoyed the heavy psych vibes nonetheless. With big reverb and languid vocals, Baba Naga are on the circuit for a number of festivals this summer, including Field Day, Visions, Green Man, and the Liverpool International Festival of Psychedelia. Fans of eerie, mid-sacrificing psych-rock should aim to catch them on one of their festival dates.


Blooms gave a strong performance at Texture bar, and despite the fact that their set clashed with the Mystery Jets’ headline slot, a sizeable crowd turned out to see the Manchester three-piece. Huge energy from brothers Tim Daniel (bass) and Mark Daniel (drums), with Matthew Adams on guitar and vocals putting his heart and soul into the performance. This band is perfect for fans of Diiv, Deerhunter, and Real Estate, mixing dream surf-pop shoegaze vibes with Manc miserablism. Stand-out tracks included the new single ‘Porcelain’ that explores mental health problems, indie pop banger ‘Head is Swimming’, and ‘Alaska’, a song that manages to be both heartfelt and catchy, with an incredible guitar riff.


The Bear Around Your Neck @ Cord Bar


Manchester-based singer-songwriter Nathaniel Scott, AKA The Bear Around Your Neck, has been steadily gathering momentum for quite some time now. His hypnotically dark brand of folk music takes a great deal of inspiration from both country and psychedelia, with delicately picked guitar arrangements breaking through atmospheric amplifier fuzz. Scott opened his set chanting ‘I’m an open wound’ as a segue into the searing melody of The Fruit Fly Way. Scott used the set to showcase a couple of brand new tracks, and closed with a deliberately chaotic patchwork of feedback. Cord Bar reached full capacity and people were turned away, testament to the appeal of Scott’s haunted, emotionally raw brand of psych-flavoured, fuzz-heavy folk.


Diet Cig were hands-down one of the best bands at Dot to Dot this year. The garage punk pop American two-piece was fronted by a tiny dark-haired pixie, Alex Luciano, who exploded on a stage as a ball of pure energy, jumping and high kicking without pausing to catch her breath and watching her, it was entirely possible to forget that live music could be anything else. Drummer Noah Bowman kept a cool presence in the background as Alex bounced her way through crowd sing-alongs, with the biggest grin never once leaving her face. Fuck your Ivy League sweater, as Luciano calls into the crowd, because this band is one worth getting sweaty and losing your cool for.


Spring King are currently hailed as a Manchester success story, hotly tipped by Zane Lowe and appearing on Jools Holland. Their sought-out headline slot at the Central Methodist Hall wasn’t quite as well-attended as expected, although plenty of younger teens took the opportunity to push and pogo in a sweaty knot at the front of the stage. The venue had sound troubles throughout the day and was an hour behind schedule when Spring King finally took to the stage. Despite their recent success, the band came off as generic with little to recommend them. Spring King might’ve given the show their all, but many people left wondering if their reputation is bigger than the songs that they actually play.


Unfortunately, DiS is stuck on the M5 for the early part of the afternoon so we miss lunchtime performances from Fews and Kermes which we're later informed were both pretty exceptional. However, Keto more than make up for it during their teatime slot in the intimate surroundings of the Orange Tree. Playing as a three-piece today, singer Leah Sinead exudes a new found confidence which results in heartfelt applause after every song from the attentive throng out front. With new EP What We Do out later this month followed by two coveted slots at Glastonbury, one suspects we'll be hearing more of them before long.


Some bands ooze a certain charisma and Pumarosa have it in spades. Particularly vocalist Isabel Munoz-Newsome who strikes a captivating presence throughout their half hour long set. Elements of trip hop fuse into ambient shoegaze - think Moloko or Portishead cutting shapes with The Verve - and it transcends itself onto the busy Rock City basement dancefloor where all and sundry are pulling moves of their own. New single 'Cecile' elicits the biggest response - perhaps not surprisingly - and the cries of _"More!" resonating around the venue tell their own story. A bright future beckons.


Nottingham has thrown up its fair share of incredibly talented artists recently. None more so than experimental trio Eyre Llew, who astonishingly only made their live debut this time last year and are only just into double figures even now. Not that anyone would notice judging by their exceptionally polished set. Combining post rock, ambient shoegaze and metal - sometimes in the same song, Eyre Llew might just be the most exciting band in the UK right now never mind the East Midlands. Closing number 'Fire Breather' brings the house down - literally - and people stand there after mouths aghast in awe. A very special band indeed.


Possibly the oldest band on the entire bill having initially formed in 1980, what this locally based trio lack in youth they more than make up for with their refreshing krautrock inspired post punk. Playing a set comprised entirely of material from comeback EP West Bank and its long playing successor Apparatchiks songs like 'Avalanche' and 'Crawl Back Under Your Stone' contain enough hooks to fill an entire curtain rail. And what's more, people start to dance, which is something New Apostles have a propensity to initiate at their eventful shows. Like a fine wine, getting better with age.


Having been another of Nottingham's most likely to succeed these past 18 months, it was somewhat inevitable that April Towers headline set in the intimate confines of Rough Trade would end in an unprecedented stage invasion. Alex Noble and Charlie Burley provide the perfect foil for one another while live drummer John Bullock adds a steeliness to their dancefloor indebted sound. 'No Zones' and 'Modern Psyche' sound huge as a result while 'Tel Aviv' and closer 'No Corruption' are potentially this generation's 'True Faith' and 'West End Girls' respectively. Big tunes that will no doubt be filling bigger stages imminently.


As with Manchester two nights earlier, the buzz surrounding Baba Naga ensured the queue to see them ran down The Bodega's staircase. However, their Zeppelin inspired psychedelic rock is a joy to behold and one that should undoubtedly find them elevated beyond that scene's niche market. Gargantuan riffs collide with Eastern tinged melodies while guitarist-cum-singer Dan Booth's shamanic chants add an air of mystery. Destined for great things in the none too distant future.


The not-so-secret secret headliners might have taken the stage at the unholy hour of 2am, but their riotous performance ensured those still standing would remember this set for a long time to come. Crowdsurfing, stage diving - one person even managed to scale the speaker stack for closing number 'Turn Me Around' - and a moshpit stretching back all the way to the main entrance made this the most punk rock show of the entire festival. Another of the city's finest bands and one that will no doubt be headlining more stages of this ilk very soon.