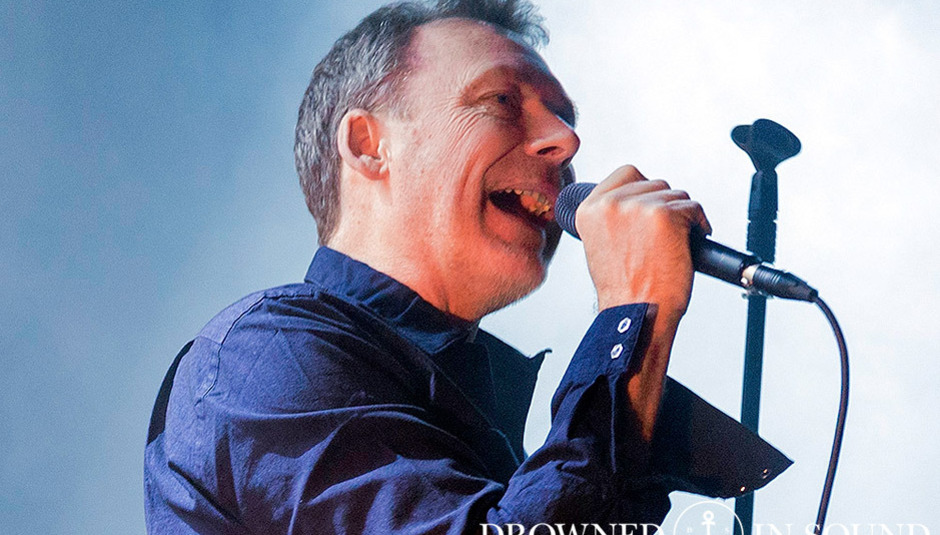 Having started out as a niche boutique event at Rusholme's homely Antwerp Mansions in the spring of 2014, Cosmosis has grown beyond anyone's wildest expectations in its two-year existence. With this year's line-up arguably among the most enticing of any festival bill in 2016, upgrading to a larger venue would be a necessary consequence. The Victoria Warehouse building, situated just a stones throw away from Old Trafford, is perhaps best known for hosting Manchester's Warehouse Project dance parties. However, with a capacity that sits at around 8,000 in total across its various rooms, bay areas and mezzanine, it provided the perfect location for an event that's fast becoming a leading name in the psychedelic rock calendar.

Make no mistake about it, psych rock is big business in 2016. From Austin's Levitation event to Liverpool's International Festival of Psychedelia and the numerous other psych fests taking place in between, the ante's been upped, stakes raised and the bar set even higher. So when the organisers of Cosmosis announced their stellar line-up - and let's make no bones about it, at least half a dozen of these acts could have and probably will headline a festival somewhere this year - they set a benchmark few could match let alone better.

With this year's thirteen hour-long shindig spread over five stages and many of the stage times overlapping, clashes would be inevitable but then isn't that the sign of a great festival? Surprisingly, there are no real teething problems worth speaking about considering this was the first Cosmosis event to be held at the venue. Sound bleed concerns beforehand were allayed early on, and although the complicated token system could be improved and extortionate drinks prices lowered (£5 for a half pint can of Heineken? Come on folks, that really is taking the piss), there's little else to complain about except a few moody security staff no doubt accustomed to the more aggressive clientele encountered at the Warehouse Project.

The first band to make an impression are London-based outfit Lola Colt on the Air (main) Stage. Having witnessed them several times over the past couple of years it's a pleasure to see them grow in both confidence and stature. Singer Gun Overbye is a diminutive presence centre stage, as is animated keyboard player Kitty Arabella, whose other band Saint Agnes will play on the Fire Stage later on. Sheffield trio Baba Naga are a warming proposition too. Formed after the tragic ending of Wet Nuns, their blues-tinged stoner rock has the Aether Stage swaying en masse come teatime.

Up next are The Longcut playing their first show what seems like an eternity. While not exactly befitting of the archetypal psych bill, they're a revelation this evening. Unsurprisingly, the packed room goes ballistic when debut single 'Transition' is aired early doors, and even when new material punctuates the majority of the set it's as well received as the more familiar songs of yore. Nevertheless, it's two more of their better-known compositions that finish the set in 'A Tried And Tested Method' and 'A Quiet Life' and once again, the Aether Stage dancefloor is turned into a heaving mass of flailing, sweaty bodies.

Afterwards, DiS briefly makes its way to the Water Stage for LSD And The Search For God's inaugural UK festival appearance. But while the sound is once again flawless, it's difficult to secure any kind of vantage point in such a confined space so we choose the less claustrophobic Air Stage instead, where The Raveonettes are playing one of the sets of the festival. Showcasing material from their forthcoming Pledgemusic funded album, provisionally entitled Rave Sound Of The Month alongside favourites from their extensive back catalogue, they're on fire throughout culminating in a bass heavy 'Aly Walk With Me' that rapturously closes their set.

With the main stage area at its busiest for The Brian Jonestown Massacre, near pandemonium ensues when Anton Newcombe and co. take to the stage. For the next hour, we're treated to a glorious career spanning set. Highlights aplenty ensue including a euphoric 'Who?', cavernous and poignant renditions of 'She's Gone' and 'The Devil May Care (Mom And Dad Don't)' towards the end of the set. Occasional collaborator, Tess Parks, makes a guest appearance to sing lead vocals on 'Anemone' while last year's 'Pish' also sounds quite heavenly in such salubrious surroundings.

For The Jesus & Mary Chain, it's back to the greatest hits rather than Psychocandy set they've been touring extensively for the best part of eighteen months. And boy, do they deliver. With such an incredible canon of material to choose from it's difficult to know what to include, and while the odd personal favourite is inevitably omitted ('Upside Down', 'Happy When It Rains'), what they do play is delivered with impeccable tenacity and aplomb. 'April Skies' leads into 'Head On' then 'Far Gone And Out' and so on. Rarely played single 'Snakedriver' and the even rarer 'All Things Must Pass' are aired midset. While the encore sees them turn black the clock as a selection of songs off their seminal debut are given an outing too. For many this is the undisputed high point of the day but with another two hours of music left to go, DiS is far from finished yet.

Over on the Fire Stage, Manchester's Purple Heart Parade are another revelation with their heady concoction of progressive shoegaze and psychedelic rock. Singer Peter Cowap is the focal point, to all intents and purposes resembling the love child of Richard Ashcroft (from his youthful "Mad Richard" days) and Steve Coogan. Backed by a band full of sonic innovation with a propensity to veer off into explosive wig out territories at any given moment. Meanwhile, Ringo Deathstarr* and The Cosmic Dead** seemingly do battle to see who can win the award for loudest band of the day. While Glasgow's answer to early Black Sabbath are a brain frazzling experience, it's the Austin based shoegazers who bludgeon the serotonin into submission. Not that we'd expect anything less.

In between times, Allah Las provide a soothing respite befitting of a band booked to close what's been a long, but ultimately rewarding day. Same time, same place next year? We sincerely hope so.