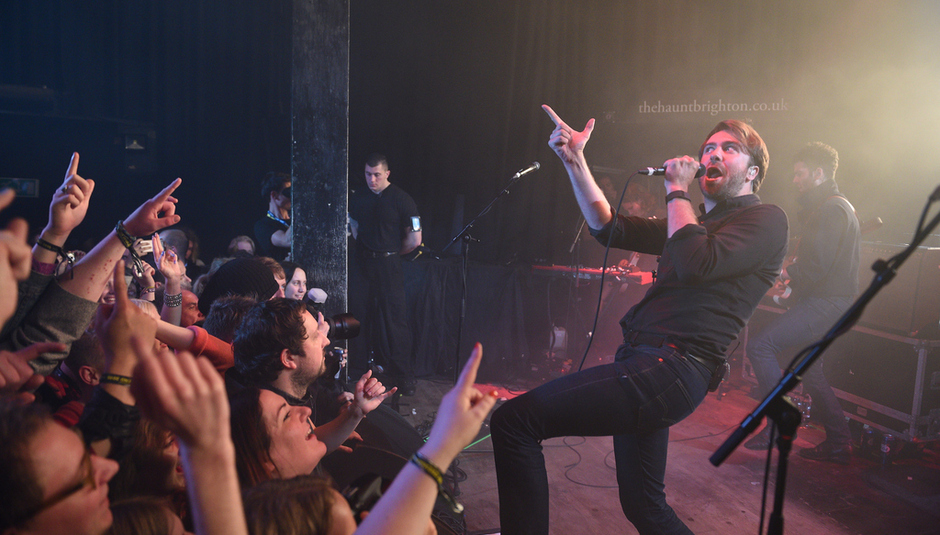 Last weekend, DiS spent three sleepless days and nights wandering around Brighton watching bands, bands and more bands. Yes folks, it's the tenth edition of The Great Escape featuring an estimated 20,000 punters and delegates, 500+ artists and over 50 venues. So without further ado, here are ten things we learned from this year's Great Escape and five new acts that blew us away in the process.

1. The Alternative Escape is the place to be

Initially conceived as a sister event to the Great Escape but often perceived as its poor relation, 2015 saw the Alternative Escape come of age. With a line-up featuring many of the artists booked to play the main event along with a number of exclusives - many in some of the most intimate settings yet without the long queues - it would be fair to say DiS spent a lot of its time in the midst of places like The Black Lion, The Albion Hotel's Rogues Bar and the Marwood. Oh, and did we forget to tell you that entry is free too?

As London's music industry sets up camp in Brighton for three days, there's always a number of buzz bands on people's lips. Within minutes of picking up our passes we're advised by a couple of major label A&R guys of bands we simply have to go and see. A conversation that is repeated throughout our stay here. And while it's always interesting to hear which artists the industry are literally tripping over each other to sign, such recommendations often turn out to be shoulder shruggingly "meh" (no names mentioned).

It's nigh on impossible to walk into a venue on Great Escape weekend without having to queue first. Which considering the wealth of talent on display is probably understandable. What can be mildly irritating though is realising the venue's only half full once entry is finally granted. Especially when it results in missing the first two songs of the act you've queued to see (Girl Band). And even more so when realising most of those people in the queue and inside the venue are only here for the next act on the bill (Slaves). Grrrr.

The Great Escape might be a festival that promotes new music yet the undisputed highlight was an intimate, stripped back performance in the corner of a sedate pub by an act whose first record came out a staggering 51 years ago. Colin Blunstone and Rod Argent of The Zombies both turn seventy next month, yet for forty-five glorious minutes they turned back the clock in emphatic fashion with a set packed with hit singles and revealing anecdotes. Closing the show with a rousing rendition of 'She's Not There' - arguably their best known song - they're a revelation while setting a fitting example to any young bands that might be in the audience watching.

While 2009's No More Stories... heralded a change in line-up and direction for Copenhagen's finest, the future was indecisively unclear. Fast forward a full six years and it appears the self-imposed hiatus was just what the doctor ordered. Founder member and guitarist Johan Wohlert is back in the fold, while recently released sixth long player +- represents their finest collection of new material in over a decade. Swaggering onto the Old Market stage on Saturday evening, their nine songs set soon becomes one of the weekend's highlights. Mostly consisting of material from the new record and 2005's And The Glass Handed Kites, it's left to a climactic run through old favourite 'Comforting Sounds' to announce their return in splendid fashion and with it this evening's grand finale. Welcome back guys, you've been sorely missed.

6. Live recording can sometimes be awkward

Have you ever been to one of those "live" televised events? The ones where the show is interrupted several times so camera angles can be switched. Or where the artist is told to restart the song several times because the director missed his cue. Or where so much as a sniffle from the audience is greeted by several weapon faces of mass destruction from the television crew. Which is why we have a degree of sympathy for eighteen-year-old Bridie Monds-Watson aka Soak, whose set on the Vevo stage is cut to just two songs - both impeccably delivered it has to be said - due to the constant faffing about on and off camera.

7. Be prepared for the unexpected

What makes The Great Escape so different from pretty much any other festival is the glut of new music on offer, and with it the opportunity to be blown away by something special when least expected. Normally such occurrences tend to happen by chance. Or on the couple of occasions here, whilst in venues waiting for the acts scheduled to play next. So take a bow Forever Pavot, a Parisian five-piece who describe themselves as "60s psych library soundtrack prog pop", which pretty much encapsulates the diverse range of ideas they throw into the mix during their glorious half hour set on Thursday night at the Hope & Ruin. And also Swedish pop sensations The Magnettes, whose fast paced electro pop owes as much to Abba and Roxette as it does leftfield artists Ladytron or Surfer Rosa.

8. Bring your own drinks

Look, we're not being penny pinching skinflints here but £4.90 for a can of warm Stella? Really? Sure, it's down South and beverages always do tend to be pricier compared to the other side of the country but what we don't advocate is being ripped off at any price. In one venue (which shall rename nameless) we're charged £2.60 for 330ml bottle of water. It's outrageous and the only way to combat such greed is by not purchasing such overpriced products. So we don't.

"Plans can fall through and so often they do," someone once sang. And with over 500 artists scheduled to play across more than 50 venues in a 72 hour period it's nigh on impossible to plan any kind of structured timetable and stick to it. We tried and failed miserably every day. Not that we're complaining, otherwise we may never have stumbled across the likes of Millions, Siv Jakobsen, Forever Pavot, The Big Moon, The Magnettes or The Mono Polys had we stuck rigidly to the plan.

10. The Vaccines are Britain's next stadium rock band

Perhaps the least obvious learning point of the whole weekend, but an inevitable observation based on the hysteria that greeted their announcement as surprise guests in the tiny Haunt venue on Friday night. With queues stretching round the block hours before they're due on stage, and near pandemonium that ensues in bodies surging forward before being catapulted left, right and centre when Justin Hayward-Young and co. do appear, their well-earned rise to Britrock's Premier League is confirmed. With soon-to-be-released fourth album English Graffiti already tipped to be one of 2015's biggest sellers and an arena tour booked for later this year, the possibilities are endless. Glastonbury headliners in waiting? I certainly wouldn't bet against it.

Five of our favourite discoveries from this year's Great Escape

Means To An End: Peter Hook plays the...