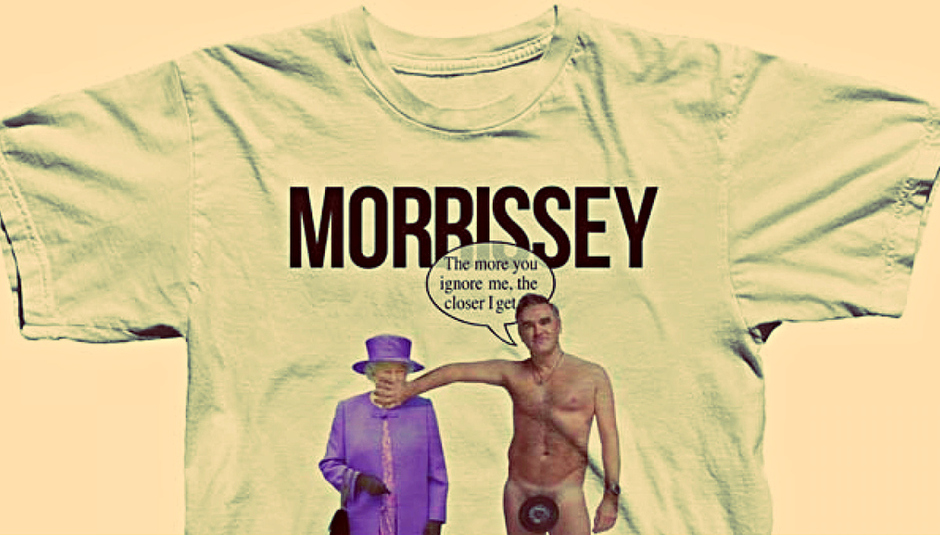 "I have no use for tomorrow" sings Morrissey halfway through his set at Nottingham's Capital FM Arena. It's a poignant moment and understandably so. Last year's revelations that he'd undergone a series of treatment procedures for cancer make tonight's show even more of an event than it normally would be. Having cancelled a show in the Dutch city of Tilburg due to illness just seventy-two hours earlier, rumours were rife whether this evening's performance would even take place at all.

Nevertheless, being the consummate professional he is, the show went on regardless. Although this was only his third solo appearance in Nottingham tonight's gig wasn't a sell out. With ticket prices ranging from £50 to £72.80 plus a 10% booking fee, it probably wasn't that surprising either. Perhaps more surprising was the lack of any support act for this tour. Tonight's pre-show entertainment consisting of a video montage where the New York Dolls and Penetration rubbed shoulders with Charles Aznavour and Steve Strange while 'Ding Dong! The Witch Is Dead' plays mischievously over footage announcing a certain former prime minister's death.

With all meat products removed from the menu and a t-shirt depicting a naked Morrissey with his hand over Her Majesty's mouth among the merchandise, it's clear who's calling the shots this evening. It isn't the first time Elizabeth of Windsor's face will appear this evening, as Morrissey enters the stage against a backdrop of Her Royal Highness giving a middle-fingered salute. Opening with a powerful run through 'The Queen Is Dead', one of four Smiths numbers aired this evening, Morrissey seemingly in fine fettle on this first night of the UK leg. Following swiftly with a pitch-perfect 'Suedehead', one wonders why all gigs didn't start in such sublime fashion. Predictably, the entire arena are on their feet, singing along to every word.

A handful of songs from last year's World Peace Is None Of Your Business precede a delightful rendition of 'I'm Throwing My Arms Around Paris', his last Top 40 charting single and only number aired off 2009's Years Of Refusal. Between song banter is kept to a minimum although Morrissey does ask "Did you by any chance see the Brit awards? Did you enjoy it?" to a roundly chorus of boos before offering a curt "So why does the damn thing exist?" The aforementioned 'One Of Our Own' and World Peace... highlight 'Smiler With Knife' come next, each saturated in melancholia with the latter's swansong "Only sadness waits for me" particularly unsettling in light of its creator's recent health concerns.

Another double whammy kickstarts the second half of the set, Meat Is Murder's spiky 'What She Said' seguing briskly into 'Everyday Is Like Sunday', arguably his most cherished three-and-a-half minutes as a solo artist. The vitriolic couplet of 'I'm Not A Man' and 'Kick The Bride Down The Aisle' give way to the unmistakeable squall that introduces 'Meat Is Murder'. What's more touching is how everyone keeps still throughout the lurid and deeply distressing video of animal cruelty and slaughter that accompanies it. Ironically, Morrissey's dark sense of humour prevails as a ferocious stomp through 'The Bullfighter Dies' is next on the agenda.

Long-standing live favourite yet relative obscurity 'People Are The Same Everywhere' and final Smiths number 'Stop Me If You Think You've Heard This One Before' bring the set to an end. Returning for an encore of 'Speedway' off 1994's Vauxhall And I which Mozzer dedicates to Arthur Seaton, the main character from the late Alan Sillitoe's 'Saturday Night And Sunday Morning', also set in Nottingham. At one point he passes the microphone into the audience where an impromptu verse of 'Irish Blood, English Heart' breaks out, only to return to 'Speedway''s grand finale, Morrissey ripping off his shirt before exclaiming "I'll always stay true to you!" in dramatic fashion.

While the speculation surrounding this possibly being Morrissey's last ever tour remains, tonight's sprightly energetic performance suggest there's plenty of life left in the old dog's body just yet. A truly magnificent show befitting the occasion and well worth the wait for Nottingham's legion of adoring fans.