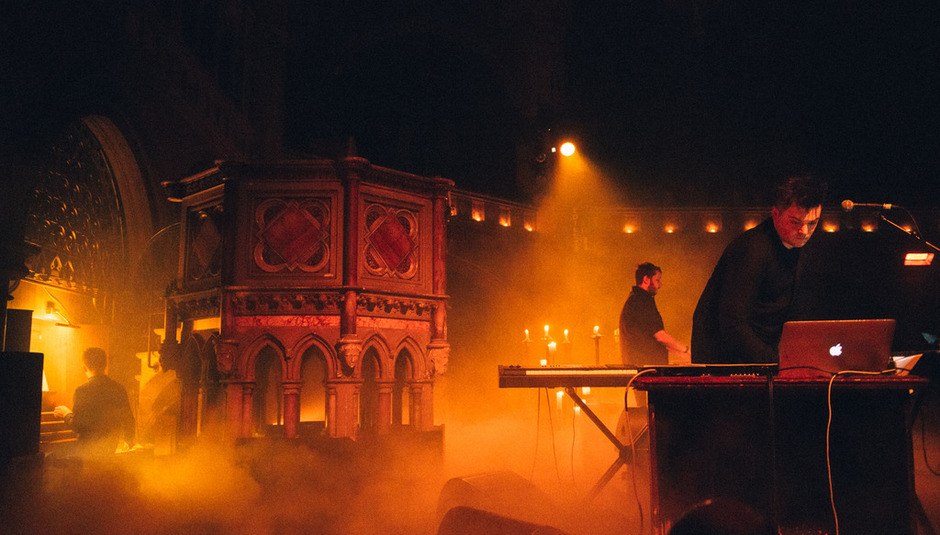 I am the son of a vicar and a violinist. I work for an organisation dedicated to the conservation of historic buildings. I like the bigger names on Warp’s roster as much as the next millennial who doesn’t really take drugs anymore. In other words, a show that would see Oneohtrix Point Never reframing and intersecting with the contemporary church music of Nico Muhly and James McVinnie in the Gothic revival acoustics of the Union Chapel was always, realistically, going to be my jam.

I also, like, know Nico and Jamie quite well, and this means I want to point to things like the title of the show, Twitchy Organs, and point out things like: Nico is interested in twitches, be they social, intellectual or indeed physical. Like, you’ll be talking to him about something and suddenly he’ll zoom in on a little spot on your forehead you’ve worried, as you’ve worked through fifteen million words of copy-editing, into a graze, and he’ll ask you: what is this? And you’ll be like, that is clearly a thing I’d rather not discuss because we all know it betrays my apparent inability to maintain brain focus on a repetitive task without indulging some gross physical corner of myself with a little picking and scratching satisfaction; but also, isn’t this sort of trained subconscious body-mind equilibrium actually quite fascinating, and don’t the marks it makes therefore tell an interesting story of how you function as a human, and isn’t pointing them out therefore a completely justifiable thing to do? And you’ll start to weirdly admire the fact he’s confronting that spot on your forehead.

So I find myself thinking narratives like this are significant and helpful reference points beyond the context of my own relationship with Nico and Jamie, when they’re actually, probably not. That they offer metaphors for understanding the themes of disruption and the postmodern layering of anxieties and multiple oscillating truths – layers which both complicate and enrich – which inhabited so much of this show, and which inhabit so much of Muhly’s oeuvre.

That perhaps Muhly’s project is, in fact, precisely an aestheticisation of twitches (a coinage that could also be used to describe a facial scab – just about): as full a realisation as possible of the diversions, ambiguities and over-analysed through-lines of contemporary experience. And that the resulting mindfuck tapestry reveals, when it ‘reveals’ anything at all, that the spot on your forehead is in fact far more interesting than the copy-editing that caused it. That a three-note sequence in one of the O Antiphons from medieval liturgy, say, or the hastening urgency of the sequence as a whole, is what chimes and triggers the modern ear, and therefore these things should be hooked out, interrogated, elongated and reassembled, in a new reading for Jamie to play (more on that later). That the joins between electronic and acoustic music are as important as the harmony achieved over ten minutes of carefully orchestrated interaction.

At the Union Chapel, the joins were marked and blatant. As 0PN took centre stage, after Nico and Jamie had done some lovely things, he announced the shift into different territory with a mechanical found sound, like a forklift truck or an automatic wheelchair ramp or something. This was typical of a show that was rarely organic or free-flowing, that was entitled to stop and start because, after all, stopping and starting was the focus, rather than a failure, of the music. (The effect was less successful during a Nico & Friends show at the Barbican a couple years ago dedicated to drones, for obvious reasons.) And actually it was its twitching avoidance of conventional momentum that ensured I was able to sidestep the easy pleasure of the familiar after all. One can accuse the twitchy among us of many things but not, I think, complacency.

If a show like this is going to move beyond the point of being basically a live iPhone playlist of self-evidently good music – presumably its aim, based on the protagonists’ repeated emphasis on iconoclastic collaboration and fucking up each other’s shit – it needs to either produce an occasional something greater than the sum of its parts, or curate itself into a really thematically interesting place. That’s what I think, anyway.

Here, thrillingly, this relationship started to eat itself. So during an almost hilariously high-brow recital of Nico’s interpretation of the aforementioned Antiphons, in full, and elegantly rendered by Jamie and the tenor William Balkwill, Nico started complicating the minimalist-monastic plainsong-pulse of Jamie’s playing with flickering little sonar counter-rhythms (which will be familiar to anybody aware of Muhly’s ‘Fast Twitchy Organs’, one of the inspirations behind this project – that and the double-entendre of ‘organ’, I daresay) triggered by his own, electric organ. I was sat in the gallery of the UC, right next to a speaker, which meant that the digital sound felt delicately isolated, like a single oboe, compared to embodied, surround-sound charge of the organ, apparently emerging from the very architecture of the chapel building. This clever inversion of the usual dynamics of electro-acoustic collaboration was even more effective because of the way the organ of the Union Chapel is sort of woven into the fabric of the building, to the extent that Jamie and his instrument were basically invisible throughout.

Organ dominance was equally responsible for the high-point of Jamie’s interaction with 0PN, during a new version of the closing track of R Plus Seven, ‘Chrome Country’, towards the end of the show. The amazing moment in 0PN’s album, when the organ of the opening track finally punches back through, at the very, very end of the record, to conclude on a note that resembles the final melodic catharsis of a Philip Glass opera – that was realised here with the full force of the Union Chapel’s pipes, evaporating the intricate loops of the track up to that point. It was especially powerful because we all knew it was going to happen – it’s such a key part of the album, it wasn’t a spontaneous intervention – but the magnificent blast of the IRL organ wrenched the effect into totally different territory. This was the basis of the success of Jamie and 0PN’s collaboration: the fact of the organ, rather than any particularly inspired choices.

Smart choices were very much responsible for Nico and 0PN’s musics rubbing up against each other so effectively, though. An addition to the set that Nico tells me was very last-minute (although it fitted so well that I’m suspicious) was ‘Skip Town’, a piece that is driven by clanging, almost argumentative passages of keys and percussion that resemble 0PN’s construction of beats from sampled café chatter and grinding cogs – so much so that a ‘Skip Town’ video, below, actually adds a layer of found sounds to the track. In a similar vein, Nico approached the augmentation of 0PN’s tracks with the same kind of witty, instinctive, slow-resolving interventions – with lots of white space in between – that fleck several tracks on his most recent album Drones.

Layer all three together, though, and the delicately balanced dialogues ended up a little flooded with synthy splashy washes of sound – sometimes plungingly loud, and wonderful for it, but failing to isolate the nobility of the organ, the contrasting similarities of Nico’s and 0PN’s projects, the bizarro twitches of these clever musicians circling and snapping at one another. Perhaps the primary point of the show was in fact these duets, and the family on the stage was above all a product of something as simple as mutual appreciation. I mean, that would be totally fine. Once, in an interview, I asked Nico why he mainly invites his friends to play at the events he sometimes programmes, and he was like: why wouldn’t I do that? One of my favourite moments from this show was when Nico and – let’s call him Dan, because that’s his name – were sat cross-legged on the stage while Jamie played some solo preludes. As a triumphant melody looped back into itself with the force of an EDM drop, Dan’s head followed it down, and then he looked over at Nico and nodded slowly with delight.

There’s a temptation to read too much into a title, and a unifying theme, which was probably mostly intended to bracket together some pretty disparate music into something approaching coherence, rather than posit a new kind of fidgety polemic. Certainly the final work of the night, ‘Twitchy Organs’ itself – maybe a new version of ‘Fast Twitchy Organs’, maybe not, I don’t know – didn’t exactly unlock everything that had come before, instead offering one of the show’s stranger, more open-ended moments, with all three musicians echoing each other in uncanny ways.

I think it is helpful to reframe, via the concept half-behind this show, Muhly’s and 0PN’s compositions as anthems for the over-stimulated, over-informed, relativist but still romantic modern mindset, though. And I think a show collaboratively mining such a diverse range of sources – from medieval plainchant to antique synthesisers – without deviating from a wilfully fragmentary artistic approach, to reveal the truths inherent in twitching, reassures as much as it challenges, and that’s a good thing. It reminds us that this flickering place our aesthetics have arrived at is both the most interesting place to be (for anything else is either ideology or a lie) and a place where we can still collaborate, more than ever actually – where we can twitch alongside one another and it might just get us closer to things like beauty and clarity and harmony.

It’s a pretty postmodern way to think about music, but that doesn’t mean it’s modern per se. In fact, when Dr. Henry Allon, a nonconformist minister, briefed the architect James Cubitt to design the Union Chapel in the 1870s, outlining his vision (shared by Cubitt) for a new model of church building, he hinted at an all-permeating, almost Trinitarian, deeply unstable and multiplicitous notion of music at its core. Reflecting on the relationship between the choir and the congregation, he wrote that the former ‘should be in it and of it – under no circumstances separated from it.’ Cubitt, meanwhile, wanted to shatter the ‘enchanted circle of habit and precedent’. Both would have relished this show in their chapel, I think.

When in doubt, give: Bjork at Carnegi...