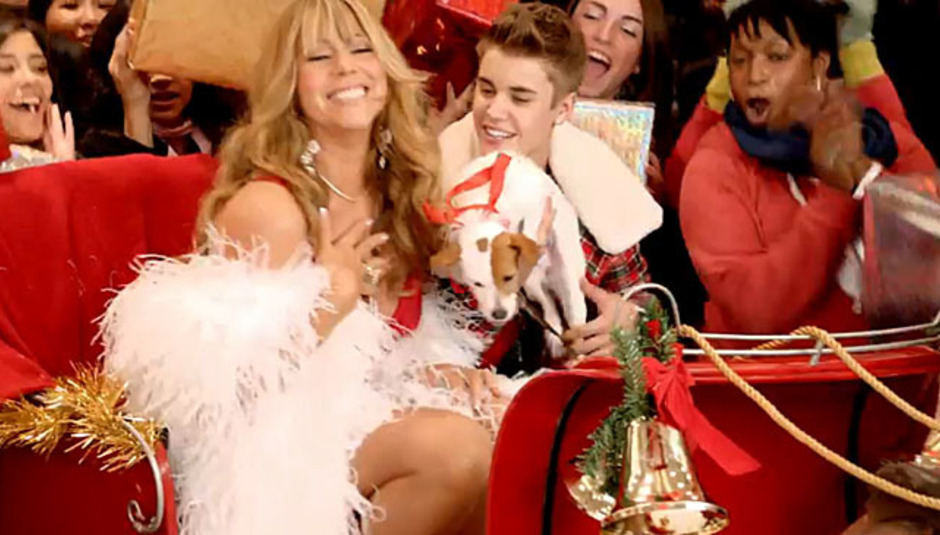 Welcome to the final DiS Does Pop of 2011 and in Smash Hits style we’ve made this one a bumper edition. Should you cast your eyes below, you’ll find the DiS Does Pop Awards, our Christmas Gift Guide, a preview of the festive Number 1 contenders, a playlist of our favourite tracks from the year gone by and a pleasantly surprising Straight To TV. So go on and gorge yourself on some pop goodness, we won’t tell anyone.

Pop song of the year: 'Beat Of My Drum' by Nicola Roberts

The bar for Girls Aloud solo singles wasn’t set particularly high but their self-styled ‘rude ginger bitch’ blew it out of the water with a little help from Diplo. An insatiably catchy beat married to some compelling brash lyrics made the entire blogosphere fall head over heels in L O V E with Ms. Roberts but alas, the same couldn’t be said for the playlisting team at Radio 1. The bastards.

An absolutely bonkers record lathered in unruly bass and catchy hooks left, right and centre. Few popstars manage to make it to six albums without falling back on former glories or reaching for the nearest MOR ballad, so for Britney to take a gamble on the experimental (by Top 40 standards) Femme Fatale makes this LP all the more remarkable. Top notch from start to finish.

Sex lyric of the year

“I'm down for whatever, when it comes to you I could make love on the floor” - Kelly Rowland, ‘Down For Whatever’

An immense piece of wordplay which combines doing the nasty with being ‘on the floor’. Does Kelly mean the floor of the discotheque or the floor of her recently refurbished open plan kitchen though? These are the questions that keep some people up at night.

Most psychologically harrowing video of the year: Sexy And I Know It - LMFAO

Last year Lady Gaga could do no wrong as evidenced by the pretty much flawless Fame Monster. This year, the cured meat fashionista released the overlong Born This Way, insisted on creating sprawling videos for each of the album’s singles and notch up an indefensibly rambling performance at Radio 1’s Big Weekend. No one could claim that the author of ‘Hair’ isn’t still a genius, her star just seems to be shinning a little more dimly of late.

There’s not much that needs to be said about Frankie Cocozza that can’t already be gleaned from his Twitter account. Sample quote: “Bit nippy outside, was last night aswell [sic] to be fair #imnotfunnyintheslightest” That said, it’s hard to see how being followed round by cameras while party rocking in the hope such debauched behaviour will result in continued tabloid headlines constitutes anything less than active encouragement.

Pop shock of the year: Olly Murs releases a verifiably ‘not shit’ single

There are many preconceptions that can be held against Olly Murs: repellent taste in headwear, constant use of a cheeky geezer grin and Heart FM mainstay barely cover our contempt for the man. For a brief timespan in August however, there was an uncomfortable moment when we had to admit ‘Heart Skips A Beat’ was definitively not shit. Maybe it was the guest spot from Rizzle Kicks. Maybe it was the Samuel Preston songwriting credit. Whatever the case, ‘Dance With Me Tonight’ brought this brief paradox to an abrupt end.

Having released six albums since she first burst into the charts in 2005, it’s fair to say no year is complete, or will be allowed to pass, until Rihanna has put out a new record. Thanks to some classy Calvin Harris contributions Talk That Talk held up for the most part, despite its Barbadian singer’s usual personality split between sex mad diva and commitment hungry heartache. Basically, it will do nicely until next November.

Sort of dubstep song of the year: ‘Changed The Way You Kissed Me’ - Example

This was the year when dubstep came to the masses causing Rusko to check his bank account on a daily basis in case anyone had dropped him any royalties for ripping off his ‘big woosh thing’. Anyway despite stiff competition from Katy B, Example’s ‘Changed The Way’... takes the crown for producing a brilliant single with a mild bass edge to it. This was a track so good, Elliot Gleave barely needed to write an album to follow it up. So he didn’t.

The Adele award for being Adele

No awards ceremony in 2011, no matter how small or unrelated to music, can seemingly go without honouring Adele and this column is no different. Does 21 deserve such relentlessly lavish praise? Well 'Rolling In The Deep', 'Someone Like You', 'Rumour Has It' and 'Set Fire To The Rain' were all achingly fine songs but that’s not the point. The award is mandatory and it’s out of our hands. Congratulations!

Imagine for a moment that you’re the Marketing Director of Argos, the catalogue retail chain. You’ve got a value range of women’s watches due out for the festive season that need a celebrity endorsement to push sales along. Which C-lister best represents good timekeeping and the cheap stickiness of fake leather? Alexandra Burke of course! Throw in an extra couple of grand and she’ll even promote the product range on late night satellite TV.

We’ve already eulogised on our admiration for the debut Sugababes album but sometimes an extended thought piece isn’t enough to get the message across. What we really need is a physical manifestation of this seminal record that’s been “electroplated with gold, so will not crack or peel”. For just under £90 and as one of a limited batch of 50, this 100% official offering is a steal.

Sugababes Gold discs are available from Everythingcollectible at Amazon.co.uk

Golly gosh, the adorable One Direction bunch know how to treat their fans well. Not only is their online merch selection of t-shirts, hoodies and mugs incredible, they also do bargain bundles on the stuff. Individually a copy of Up All Night, a hoodie, tote bag and the boyband's adorable 2012 calendar would set you back the grand total of £67.96. When sold as a combo, £65 is the outstanding price you can expect to pay. Unquestionable value.

Grab the value pack while stock lasts at OneDirectionStore.com

Yes, your eyes do not deceive you. That is a Christmas dog shirt with ‘It’s Britney's bitch’ embossed on the back. Forget Femme Fatale, this is the best release the ‘On My Radar’ hitmaker has put out all year.

A t-shirt that immortalises the X Factor girl group’s line-up on low grade cotton. If you’re a fan of the ‘Little Muffins’ or an amazingly self-aware Hoxton resident, then this phenomenal piece of knock off merchandise is an essential stocking filler and not in the least bit premature.

Little Mix perfect roll call t-shirts can be bought from OnePoster.com and a wide variety of other reputable bootleggers

Michael Bublé is first and foremost known as a crooner who enjoys ‘the sex’ and a verile man who regularly encompasses all kinds of steamy stuff in his boundary pushing covers / lyrics. Bearing this in mind, the ability to purchase these ‘Naughty or nice undies’ from his online shop is a bit odd. If you’re a fan of the Bublatron, you must be naughty by nature. No question.

As ‘the one in JLS with the shaved head who is not Marvin’, we’ve always has a special spot in our heart for JB. It seems fans of the 'Club Is Alive' bunch agree too as only posters featuring JB and Aston, the short one who does backflips, are available to buy online. Oritsé and Marvin are either out of stock or unavailable through lack of demand. Make up your own mind.

Get your hands on a brand new copy of Matt Cardle: My X Factor Story from Amazon

As a shaggy haired rocker once tunefully screamed over the Tesco tannoy system, “It’s CHRIIIIIIIIIIIIIIIIISTMAS. ” Aside from mistletoe, wine and a two week period where Cliff Richard becomes culturally relevant again, this can only mean one thing, an ocean of subpar balladry looking to make it to the top of the charts. To celebrate the occasion, we took a look at the contenders for a festive Number 1.

Wherever You Are - Military Wives Choir

The bookies favourite and main rival to X Factor winners Little Mix are another TV manufactured outfit of military wives. Proceeds from ‘Wherever You Are’ are to be shared between the Royal British Legion and SSAFA Forces Help charities which is nice. The song’s lyrics were compiled from letters sent by servicemen and their wives to each other which is also nice. Not nearly nice enough to make us blub through the song or buy it, but nice enough make us think there are far worse offerings to spend your Xmas pennies on.

As much as Little Mix were our favourite X Factor contestants by a country mile, ‘Cannonball’ really is just a soppy ballad shoved out for a quick cash grab. Hopefully, the band’s first single will tread their home territory of up tempo urban pop and we can all forget this saccharine sweet Damien Rice cover ever happened.

What better way to summarise the commercial strength of guitar music than this hapless attempt to dredge ‘Smells Like Teen Spirit’ up to Number One for the sake of ‘real music’. The song is twenty years old and no one benefits from its sales other than Courtney Love and co but who cares when there are the evil forces of some military wives and four teenage girls to fend off 'our charts'?

Last Christmas - The Only Way Is Essex

So ‘Last Christmas’ has been shat upon from an impossibly high height by the cast of The Only Way Is Essex. What a surprise. To avoid featuring these awful human beings in the column, the above video features Joe McElderry’s cover of ‘Last Christmas’ from his Classic Christmas album. We wouldn’t describe this as a better effort, just one with a more amusingly low budget video.

All I Want For Christmas Is You - Mariah Carey & Justin Bieber

Also known as ‘All I Want For Christmas Is You, A Trip To My Local Macy’s Department Store, A Puppy, A Smartphone To Use Shazam On, A Nintendo 3DS And Some Awkward Flirting With A Woman Twice My Age’.

The Royal Variety Performance is a British institution of puzzling proportions, so when we were told Nicole Scherzinger was scheduled to perform a rendition of ‘The Phantom Of The Opera’ alongside four former Phantoms it all made sense in the most bizarre way possible. To be fair to the ‘Wet’ chanteuse, her rendition of the West End standard was pretty incredible. So incredible we think she should be surrounded by a bevvy of middle-aged men in all her future TV performances.

Since it is the season of goodwill, the last DiS Does Pop column of 2011 ends on a high note; a playlist of some of our favourite tunes from the year. For those of you who get a bit angsty about stuff we’ve missed out, this is not an attempt to collate the best tracks from the past 12 months, more a selection of amazing songs placed in a pleasing order. Expect synths, Rihanna and a smattering of references to ‘the floor’.

Give the DiS Does Pop 2011 Playlist a spin here

That's it for DiS Does Pop in 2011 folks. We'll be back next year with more sardonic commentary and quality tunes, in the meantime have a merry Christmas and a happy New Year.