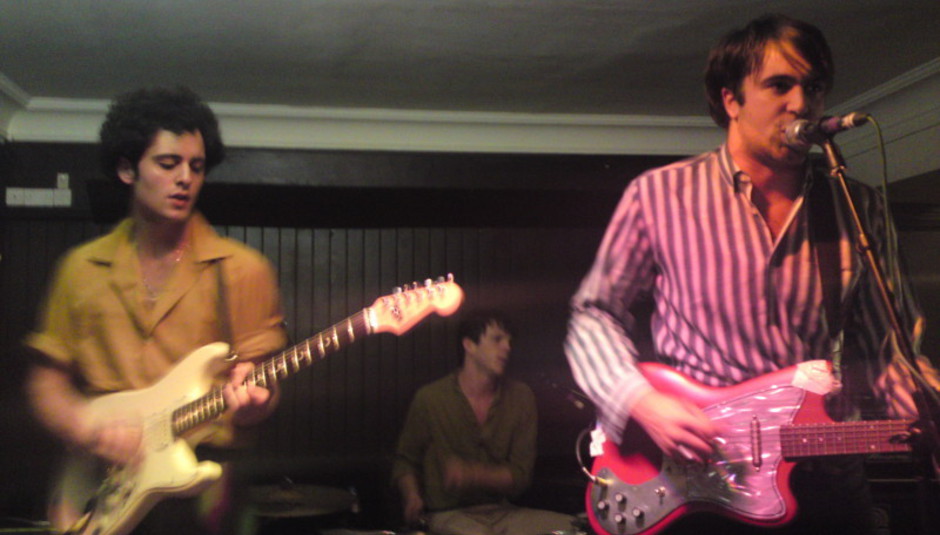 DiS meets The Vaccines: "The band don't create media interest - the media do"

DiS meets The Vaccines: "The band don't create media interest - the media do"

The Vaccines are a name that's on the tip of everyone's tongues right now. Having been together for less than a year, the hotly tipped London four-piece seem to be carrying the whole future of UK guitar music on their shoulders thanks to an unprecedented hive of media interest. While doing their level best to keep a low profile and let their music do the talking so far, the industry and media circus seems to be following their every move despite them not as yet having released a single record. Indeed, that first single on capital based indie Marshall Teller doesn't hit the shops until November 29th.

DiS is here in Sheffield along with several broadsheet journalists and a film crew making a short on-the-road documentary. There's barely time to breathe let alone sit around for a twenty-minute chinwag. Nevertheless, Justin Young and Freddie Cowan just about manage it between soundchecking and mealtime. Young (singer/songwriter/guitars) you might recognise from his alter ego as folk rock troubadour Jay Jay Pistolet. Cowan (guitars) meanwhile is the brother of Tom Cowan, better known as The Horrors' Tomethy Furse. Completing the line-up are bass player Anri Hjorvar and drummer Pete Robertson.

Unsurprisingly, there's an element of suspicion from both Vaccines as we first sit down, microphone switched on and dictaphone running. It seems they've already amassed as many haters as they have disciples, many in bands no doubt jealous of the recognition they're currently enjoying. However, their sudden elevation from unsigned unknowns to front page cover stars warrants some form of investigation...

DiS: Justin, your previous project was very different to The Vaccines. What made you start the band and in particular, influenced you to make this kind of music?
Justin Young: Me and Freddie started the band with a friend who quit soon after. To be honest, when we started it wasn't a calculated thing to make fast guitar music. We just started messing around with some song ideas and it was almost like a happy accident really in the way the songs developed.

DiS: It does seem to be the perfect time to launch a guitar band of this nature in the UK at this moment, what with such a dearth of interesting bands of a similar kind around at the minute.
JY: It may well be, but we weren't contrived in any way. We didn't set out to exploit any gap in the market. I mean, there are plenty of guitar bands out there, but just not any that are making the same kind of pop music as us.

DiS: The media coverage you've had so far is quite astounding considering you've yet to release a single record. Were you expecting this level of interest at such an early stage?
JY: No, not at all. The band don't create media interest - the media do, then funnily enough the media then complain about all the media interest! We're really happy with our songs and very confident that we're a good band, but we certainly weren't expecting as many people to prick up their ears at this stage.

DiS: Do you worry about the weight of expectation that's already been heaped upon the band's shoulders? There already appears to be a number of people waiting for the band to fail, particularly where other unsigned artists are concerned.
JY: Maybe Drowned In Sound is...but seriously, I think that is to be expected. However there are two things to remember. Firstly, we don't create the hype and we aren't in control of it. We're not the ones saying we're the next big thing. It's other people who are saying that so surely the weight is on their shoulders not ours? Secondly, we've all been in bands before - I've been playing in various bands for twelve years - so we know what we're letting ourselves in for. This time last year I was driving up and down the M1 every other day to do shows to no more than about twenty people so I don't feel guilty about the attention this band is getting because we've all put a lot of hard work in over the years. I feel it's taken a long time for me to get recognised so perhaps these bands who are critical of us should really be concentrating on their own music rather than ours.

DiS: I'd be inclined to agree with that. I think some bands are only to quick to blame their surroundings rather than look in the mirror at their own failings instead.
Freddie Cowan: Exactly. I mean it's never been easier for bands to progress than it is nowadays. You have so many ways of networking via the Internet that bands from small towns don't have to move to London any more. There are so many amazing opportunities for bands to put themselves on a pedestal without having to wait around for someone else to do it for them.
JY: He's right. I do understand the resentment and I'd be lying if I said I hadn't been there before myself, but again it's got nothing to do with us.

DiS: Having all been in bands before, are there any mistakes you might have made back then which you've learned from and will approach differently now?
JY: Yeah, I think more creatively now. I mean, life is a learning curve in general so we'd be naive if we thought any differently. I guess if this all goes wrong we'll probably look back and wish there were some things we could have changed, maybe from a songwriting point of view at any rate. It's easy for people to look at us and think its all calculated, but professionally not really, no...

DiS: I'm led to believe there was a bit of an A&R scramble from record labels for the band's signature.
JY: That's another popular misconception. There actually wasn't a scramble at all. We signed a small modest deal with Columbia Records before our London show recently, and to my knowledge there were no other labels taking an interest, so that's probably another part of the rumour mill.

DiS: That's quite a major label though for a band in your position. How supportive are they in terms of allowing you full creative control for example?
JY: The deal itself didn't include an advance payment or anything like that. It is purely focused on us and they haven't imposed any timescales or tried to tailor us in a certain direction. They just want us to get out there and play to as many people as possible, which is what we intend to do for the rest of this year.

DiS: That seems quite unique in many ways as most major labels are now only offering the 360 degree deals which pretty much gives them sole control over an artist's destiny.
JY: If that had been the case we wouldn't have signed to Columbia, we'd have signed with an independent label instead.

DiS: Your first release 'Wreckin Bar/Blow It Up' is out in a few weeks time. Are there already plans in place for a quick follow-up single, maybe to strike while the iron's still hot as it were?
JY: We're going to be putting out another single in January, and the album's almost finished so hopefully that will be released in the early part of 2011 as well.

DiS: And I guess there'll be a tour to coincide?
JY: We're touring for the rest of this year and then we're going to be on the road pretty much for the first three months of next year.
FC: Its pretty non-stop.
JY: Yeah we're playing on the NME tour at the start of next year, so it is non-stop really I guess. It's all very well being surrounded by hype and buzz but I've always been really wary of bands that build their houses on sand, so what we want to do is play as many places as we can and build the band up in the right way, and we're quite happy to play wherever we can whenever we can.

DiS: Your first show was in Leicester I believe? What made you launch your live career there?
JY: I dunno, I guess we just thought let's go somewhere that no one would care about us being a London band, and sure enough no one did! We just wanted to play a couple of shows with no pressure and Leicester felt like a good place to start.

DiS: Do you prefer the buzz of a live performance to the more controlled environment of the studio?
JY: I like feeding of the audience, so to me the best thing about being is a band is playing a live show.
FC: You get satisfaction from recording - our album has been recorded live pretty much so far for example - but it's not the same as performing in front of an audience.
JY: That's more like creative satisfaction rather than the raw energy of a live show.

DiS: I think that definitely comes across on the recordings I've heard.
JY: To me there are two ways of making a record. The first one is deliberating over it for months and creating a personal masterpiece that sounds three dimensional the first time you listen to it through headphones, and then the other way is just to capture a moment. We haven't used any tricks. I don't consider our songs to be growers that take ten listens to get into. People will either like us or they won't, it's that simple.

DiS: How long has it taken you to record the album so far?
JY: It's probably taken us about one song per day. We've been recording it with a guy called Dan Grech, who also works as Nigel Godrich's engineer. He's a really technical guy, but in terms of arrangements we'd pretty much decided all that ourselves before going into the studio. He's just taken care of the recording process.

DiS: Do you see The Vaccines potentially spearheading a scene in terms of influencing teenage kids to pick up guitars and form bands?
JY: Not really. I don't consider us to be part of a scene.
FC: We did play with a band last night who were all sixteen years of age and they admitted they were fans of us and they put reverb on their guitars after hearing us so I guess that kind of thing in terms of being an influence could happen.

DiS: Are there any other new bands you feel we should be looking out for that perhaps haven't had the recognition they deserve?
JY: Who are currently making music? I don't really know if its my place to say who you should be looking out for but there are a few bands we like. Some friends of ours are in a band called Colours who I think are really good. Another band who I'm sure you're aware that deserve a bit more recognition in my opinion are Graffiti Island, and Veronica Falls too I think are making some great music at the minute.

DiS: Finally, what advice would you give any other new bands who are just starting out?
JY: Avoid hype at all costs!

The Vaccines are currently on tour and can be seen at the following venues:-