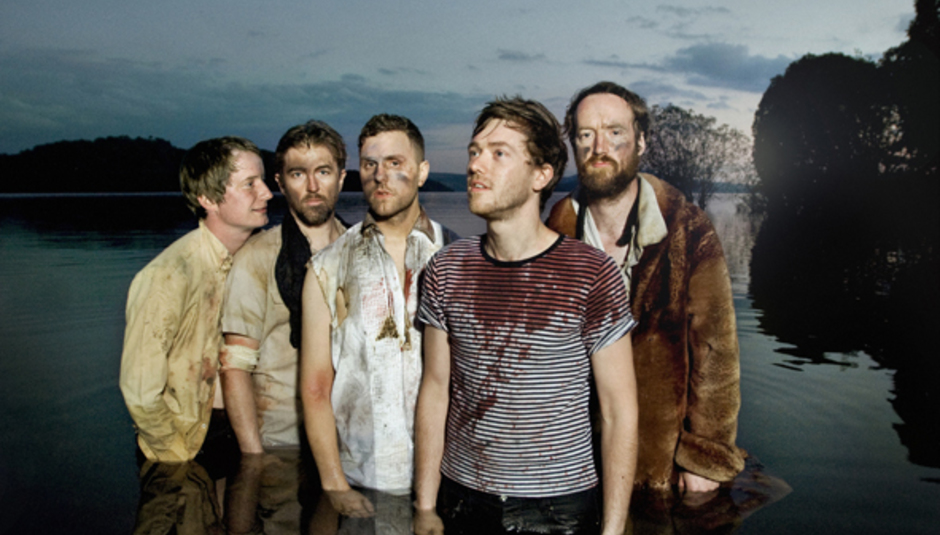 Over the past two years, The Phantom Band have been one of the leading lights on the Glasgow scene. The sextet’s debut LP, Checkmate Savage, was much lauded when it launched in 2009 and their subsequent live showings have proved the Phantoms to be a band of rare madcap brilliance.

In the wake of Checkmate Savage’s fantastic follow-up, The Wants, we pinned down bassist Gerry Hart before a transatlantic flight to chat all things Glasgow, birthdays and the death of proto-robofolk…

Since we’re celebrating DiS’s tenth birthday lets start on topic. How did you mark the turn of your first decade?

My birthday is in December so five out of seven years were spent at school. I also had the misfortune that five out of the six people in my family had their birthday within six days of each other, so birthdays are usually fairly quiet affairs. It was probably just a few cans of beer and a tin of gas down the woods with my friends.

Today is our Glasgow day, where we're focusing on the city's music scene and all the sounds to come out of it over the past decade. What bands from the city had an impact on forming Phantom Band's sound?

I think the only band from Glasgow to have a real impact on us would be Uncle John and Whitelock. They played some really raw and intense gigs that we all would go along to, and while not really influencing our sound I would say that they certainly raised our expectation of how powerful our gigs should be.

Was signing to Chemikal Underground a bit of a thrill as a local band?*

Signing to anyone was a thrill - we quite often had people from labels claiming they would be coming to see us live and then not turn up. I think Chemikal turned up purely because they were living so close. They felt obliged to I think. I tended not to look at the label as a Glasgow label as the records they were releasing were not just for the consumption of the local community and their acts always seemed to doing fairly well worldwide. I think they stand out as they release records for the right reason. There is no grand plan of making loads of money off them - it really is just a labour of love and you know that everything they release they have a real emotional attachment to.

Now you've established yourself nationally, do you still consider yourself to be a Glasgow band?

We never have considered ourselves a Glasgow band. We all listen to music from around the world so why just limit yourself to your local scene - which we were never part of anyway. We've always had the thought of making the best music that we can, no matter what it sounds like, which I'm sure we would have thought had we been in a different continent or on the other side of the equator.

That’s an interesting point - I always think you can spot a Glasgow band, no matter what they sound like. Do you think Glasgow bands have definitive traits?

We're quite removed from any sort of London scene so have never had anyone who has become reasonably successful and has been trying to chase what is ‘hot’ right now.

Your new record, The Wants, is out this week. Have you continued down a similar esoteric pathway?

We didn't sit down and plan the path we were taking, again it was just a case of collating all the noodlings and little pieces that we had been messing around with in rehearsals and mould them into songs. I suppose we may have had a bit more confidence to do as we please but on the other hand I don't think lack of confidence was something we suffered from in the past. So in answer to your question - yes?

Now here's a predictably token question for a band making their second album: do you feel under any more pressure with this record given how acclaimed Checkmate was?

And how many times do you think you'll be asked that question over the coming weeks?

That's the first time but I reckon I will be asked 16 more times. 17 times is the average.

It's funny, I've read so many things about you being an 'art' rock band but I really don't get that impression at all. There's nothing pompous about The Phantom Band is there?

Slightly ridiculous, yes. Pompous? I don't think so. Though Andy doesn't let anyone look at him in the eyes in the studios. And he asks that we all call him "Sir".

Talking about pompous, do you think the 'proto-robofolk' scene you inspired is dead?

The robots have killed off the folk. We're passed the point of no return now and we can't do anything about it. Best just to hope for the best.

Finally (in a tenuous link back to DiS’s tenth birthday) what does the next ten years hold for the Phantom Band?

One or three more albums and then splitting up.

The Wants is out now.

In The City: The DiS review