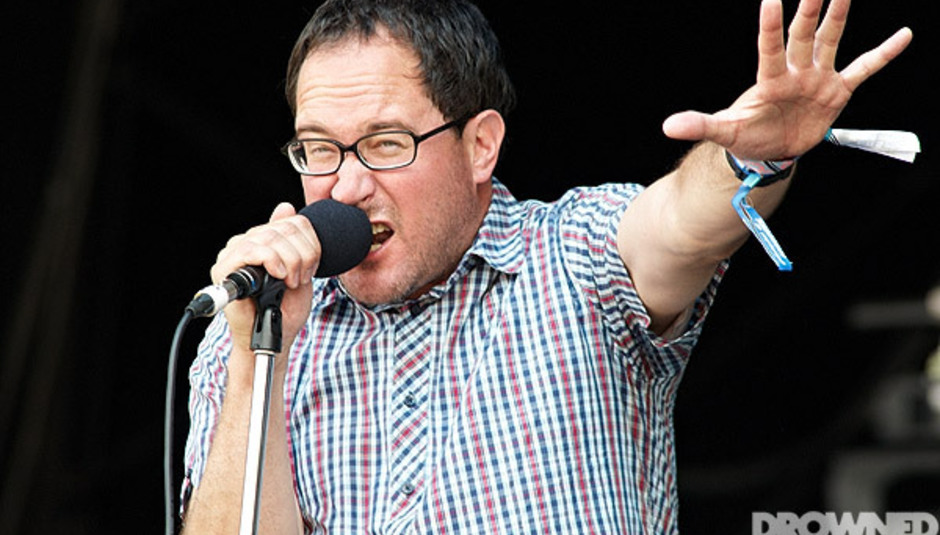 As part of our 10-week "DiS is 10!" celebration, we have asked 50 of our favourite people to tell us about one of their favourite albums of the past 10 years. In our second "favourite 50" installment, DiS contributor and 'My Name Is Emo' columnist David Pott-Negrine, shares his choice... I am sat staring at the sleeve to my copy of Boys And Girls In America. I am currently trying to identify a lyric or a line to use as a quote to highlight my feelings on this record. The problem lies not with a lack of quotable lyrics, but that fact there are just too many. Ever song, every lyric contains something that I could pullout and type here, that could be expanded on as a way to explain this album’s appeal. Boys And Girls In America, along with the rest of The Hold Steady’s back catalogue, is a goldmine of quotable lyrics. The album opens with ‘Stuck Between Stations’, where Craig Finn declares, “There are nights that I think that Sal Paradise was right/Boys and girls in America have such a sad time together”. The line is taken from Jack Kerouac’s On The Road, and pretty much sums up the whole mood of the record. It’s a celebration of nights out, of twilight hours spent in the company of your peers, but it’s not necessarily a celebration of the good times, more of a tribute to the times that possibly shouldn’t have happen, or that didn’t really go your way. It’s not just Minneapolis, it’s not just America, it’s every town, every city, every boy, every girl, drunk and regretful or hopeful or something.

There are nights when I wonder how anyone couldn't like The Hold Steady. The amount of time that I spend listening to them is second only to the amount of time I spend listening to Bruce Springstein. Of course, it helps that The Hold Steady sound a hell of a lot like the Boss. This is why I assume most people have a problem with them. The oft described “best bar band in the world” are likely to sit funny with a lot of people; they exist one or two steps away from classic rock, the most dreaded and derided part of the whole rock and roll spectrum. But dig a little deeper and you’ll find Husker Du, the Replacements, The Minutemen or any number of 80s hardcore or indie rock etchings hiding beneath the surface.

Another criticism levelled a The Hold Steady is that they’re too old for indie rock. This just works in their favour. They came up in the 80s, exposed to the great bands and no doubt formed great experiences on which to base their story telling and their musical output. They’ve lived through it and produced recordings of everything they’ve seen, be it punk rock, killer parties, Catholic guilt, massive nights, drug deals, celebrations, failures. They’ve the scars to prove it.

Boys And Girls In America is, if not their finest, but their most concise and cohesive record. It’s the album where they really became The Hold Steady. Their first two albums, the rough around the edges Almost Killed Me and the somewhat conceptually flawed Separation Sunday, both lack the scope and range of Boys And Girls In America, no doubt in part due to the introduction of pianist Franz Nicolay as a full time member. Nicolay’s piano motifs and sing-along backing vocals bring a new level of class to the proceedings. Nicolay left in January of last year, and it says a lot that Heaven Is Whenever, their first album is a messy and unfocused affair.

The Hold Steady are not the kind of band that you simply like. It sounds cliché to say it, but you will either love them or hate them. If you hate them, then yes, you’re right, they’re old and they sound like classic rock. If you love them then, yes, you’re right, they sound like classic rock, and they’re awesome. Boys And Girls In America is a classic rock album in the sense that it’s a rock record and it should be regarded as a classic. We’ll give Kerouac the last word on the album: “Boys and girls in America have such a sad time together; sophistication demands that they submit to sex immediately without proper preliminary talk. Not courting talk - real straight talk about souls, for life is holy and every moment is precious."

Picks from the DiS archive...