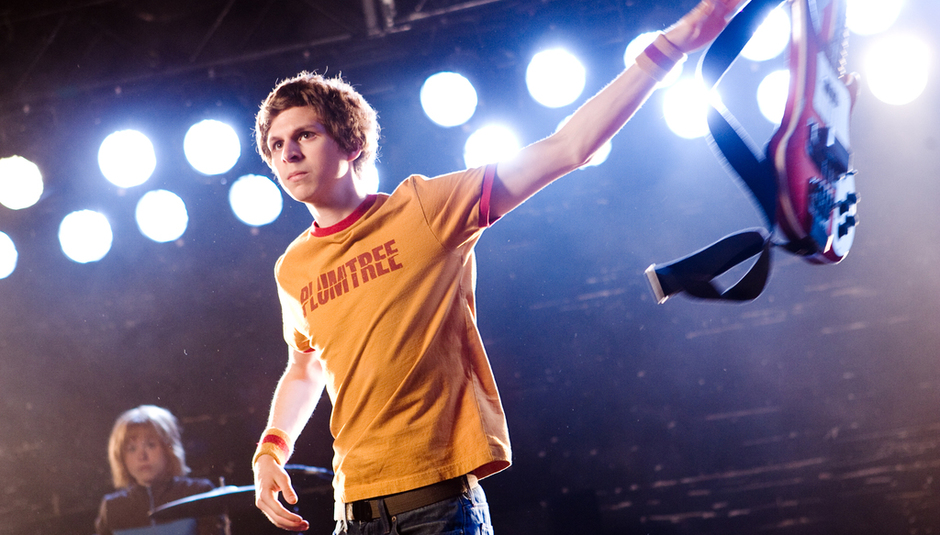 Though Scott Pilgrim Vs The World may be a film coloured by comic book references, computer game effects and the seven evil exes of one Ramona Flowers, it is music that provides its outline. Scott Pilgrim, played by Michael Cera (Juno, Superbad) stars as Pilgrim who divides his time between his bed and his band Sex Bob-Omb, spending his life either at practise or playing shows. Director Edgar Wright (Spaced, Shaun Of The Dead) knew that the authenticity of the music would be a deciding factor in whether or not Scott Pilgrim would sink or swim. “There are a lot of fictional bands in the film and I am quite critical of fictional bands in cinema so I really wanted the groups in our movie to be real and diverse” says Wright as he settles down to speak to DiS.

Wright decided to recruit his friend Nigel Godrich, who in turn asked bands such as Metric, Broken Social Scene and Beck to not only contribute music to film’s soundtrack, but to actually provide the music for the fictional bands in the movie. As Wright explains. “It was Nigel’s idea to get a different band involved for each of the bands in the film so we started to go around and ask people and luckily all the people we approached wanted to get involved.”

As a result Metric have become The Clash At Demonhead whilst fellow Canadians Broken Social Scene morph into the comically dark punk band Crash and The Boys. “Some of the bands got to be similar to how they are in real life like Metric whereas Broken Social Scene did it for a bit of a laugh because their songs are nothing like they normally do” says Wright. “Beck was a bit different in that he approached it as if he was writing songs for Sex Bob-omb although I think a lot of the stuff he’s written for us is similar to the lo-fi moments of his career.”

One of the films most impressive elements is displaying the powerful nature of live music on the big screen. A lot of the time this is done in battle sequences where Scott Pilgrim is quite literally fighting the physical force of another band’s music. For this to work best, Wright knew who he had to call on. “I think indirectly that Cornelius inspired those specific scenes because seeing them live really feels like this is music from the future coming to blow your ear drums.” There is a feeling that Wright got to play the role of fantasy festival curator on Scott Pilgrim, and Cornelius do indeed crop up in the movie to play a pair of skull crushing electro wizards intent on destroying Cera’s eponymous character.

Trailer: Scott Pilgrim Vs The World

And so to Scott Pilgrim himself, Michael Cera. Much loved for his roles in some of the biggest indie movies of the past five years, and of course as George Michael in Arrested Development, Cera takes the role of Pilgrim and applies his usual charm and subtle humour to the performance. There was one challenge awaiting him though - playing bass guitar. Luckily, there was an indie band to look to for inspiration. “I already knew how to play bass but we had to learn these specific Sex Bob-Omb songs so I had to be taught that. We had rehearsals for a few weeks and everyone in that band learnt how to look like we were a real band and really playing those instruments.“ As for inspiration? “I really like this one video by a guy called Alden Penner who used to be in The Unicorns. He’s in a band called Clues now and I like his style.”

Essentially, Scott Pilgrim Vs The World’s heart beats to the sound of music. If it’s not Black Lips, Blood Red Shoes or The Rolling Stones soundtracking the action and romance then it is the fizzing bed of sounds and effects that Nigel Godrich spent a year weaving together with Wright. “The fights are almost more like dances and there is definitely a sense that the music and the sounds involved in the fights power the action along.” explains Wright. “We had a temp track on set with specific tempos written down and then we’d choreograph around that tempo. A lot of the music involved in the film was scored to a finished edit so Nigel had a good idea of what tempo the music should sound like.”

There are even plans to release Godrich’s (along with Cornelius and Dan The Automator) contributions as a sort-of alternative soundtrack. “Nigel’s album is available on iTunes and when the DVD comes out we hope to release that physically. The official album with the songs by Beck and Broken Social Scene is being called The Red Album and Nigel’s is a Blue album.”

So, if Scott Pilgrim has to defeat seven of his dream girls evil exes to win her heart what are the musical skeletons in Edgar and Michael’s wardrobe, lurking and likely to confront them at the worst possible moment? “I’m a big believer in guilty pleasures,” explains Wright. “I think everyone’s got Abba on their iPod, that’s not a massive bombshell is it? I’m a big Queen fan but then a lot of people would say they’re one of the best bands ever.” Cera agrees with both statements. Racking his brains Edgar finally beckons up a tight trousered memory, “I saw Dave Lee Roth in concert when I was about fifteen.” “How was he?” asks Cera. “When I was fifteen he was amazing!”

With a heady mixture of action, comedy and huge musical moments Scott Pilgrim Vs The World looks set to become an instant cult classic. The only down side? You might actually end up preferring the fictional bands to their real life alias. The campaign to get a Sex Bob-omb album and tour starts here.