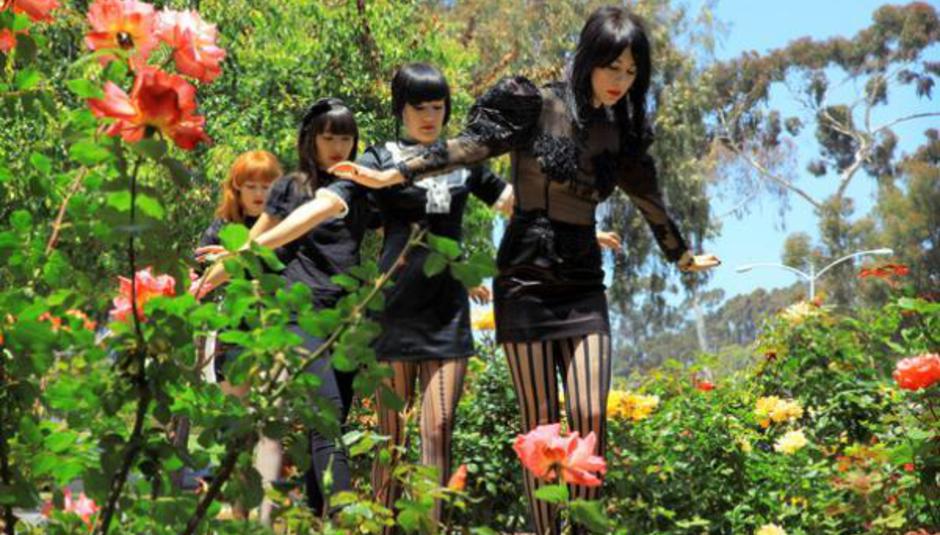 California's Dum Dum Girls may have been floating around the LA underground scene for a couple of years now, but it's only recently that they've come to the attention of a wider audience both Stateside and here in the UK.

Initially the solo project for vocalist/guitarist/songwriter Dee Dee Penny, after releasing a handful of singles and EPs for the likes of Captured Tracks and Art Fag, Dum Dum Girls found themselves subjects of an industry bidding war, eventually signing with legendary Seattle imprint Sub Pop. In the meantime, Dee Dee embarked on a recruitment mission, enlisting the services of Jules (guitar), Bambi (bass) and former Vivian Girls and Crystal Stilts drummer Frankie Rose, since replaced by Sandi Vu.

Dum Dum Girls' debut album I Will Be came out earlier this year to unanimously positive reviews, including a haughty 8/10 here and this weekend they're back in the UK for several shows before their never ending tour schedule takes them around Europe, back to the States and then Blighty again in September as special guests of MGMT.

DiS: You're coming back to the UK later this month. How was your previous visit in May and how do British audiences compare with those back in the States?
Dee Dee: Our May shows were great. We have a lot of friends in London so it was quite a party, and we'd never played any of the other cities before, so everything was new and exciting. Manchester was a personal favorite because I love so much of all the music that came out of there.

DiS: Your album 'I Will Be' has received positive reviews from most of the UK music press. Were you expecting this kind of response and how would you react if there was a backlash at any point?
Dee Dee: I love what I do and am proud of the record; anyone else regarding it favorably is a bonus. I try to keep away from reviews in general because I am a bit sensitive. There's a lot of unnecessary hate out there.

DiS: The album itself features many newer songs rather than those from your previous singles. How difficult was it to decide what to include and what to omit and what influenced your decision?
Dee Dee: I simply didn't want to release things that had already been released before, with the exception of 'Yours Alone', which I felt fit the album thematically.

DiS: You also worked with the legendary Richard Gottehrer on 'I Will Be'. How did this come about and what was he like to work with?
Dee Dee: His name topped my list of "dream mixers and producers" to help out with my self-recording of I Will Be and after cold-calling him, he surprised Sub Pop and I by actually being interested. He's an absolute dream to work with; we have a natural rapport and are essentially on the same page, not to mention his 1960s Brill Building songwriting history being a direct inspiration, as well as all the amazing records he produced in the 70s and 80s.

DiS: Do you see Dum Dum Girls collaborating with him again and are there any other people - musicians, producers or otherwise - you'd consider working with in the future?
Dee Dee: I actually just spent the last extended weekend recording an EP with him in Sune Wagner's Brooklyn studio. I'd love to duet with too many legends to name...!

DiS: Although initially a solo project, Dum Dum Girls has since evolved into a full band. How did this process work and what made you choose the people currently in the band?
Dee Dee: It was just a matter of making a recording project into a tourable form. I picked girls I knew were talented musically but also very good friends of mine.

DiS: Your previous drummer was ex-Vivian Girl and Crystal Stilt Frankie Lee Rose. Why did she leave and was it a mutual decision?
Dee Dee: Yes it was mutual. We needed a drummer as committed as we were, and she needed to finally do her own thing.

DiS: In terms of songwriting, is it still primarily your responsibility or will the other band members collaborate in future as well?
Dee Dee: It's still all me at this point but you never know what might happen in the future.

DiS: What does your husband (Brandon Welch of Crocodiles) think of Dum Dum Girls music and likewise, what is your opinion of Crocodiles?
Dee Dee: Obviously, we love each other's bands!

DiS: Do you feel that there is a weight of expectation or legacy to live up to now that you are signed to Sub Pop and how supportive are the label in terms of timescales regarding future recordings and releases?
Dee Dee: Not really. Sub Pop is a perfect label; all love.

DiS: Are there any new songs in the pipeline or plans for the follow-up to I Will Be?
Dee Dee: It's most likely there'll be a new EP, 'He Gets Me High,' in the semi-near future, and a new LP next fall.

DiS: Finally, you've been known to record/play the odd cover version since starting Dum Dum Girls....'Black Tamborine's 'Throw Aggi Off The Bridge' and Delta 5's 'Mind Your Own Business' being a couple that spring to mind. Are there any others which you're planning to play live or record in the future?
Dee Dee: That's a secret!

(All shows in September and October with MGMT)