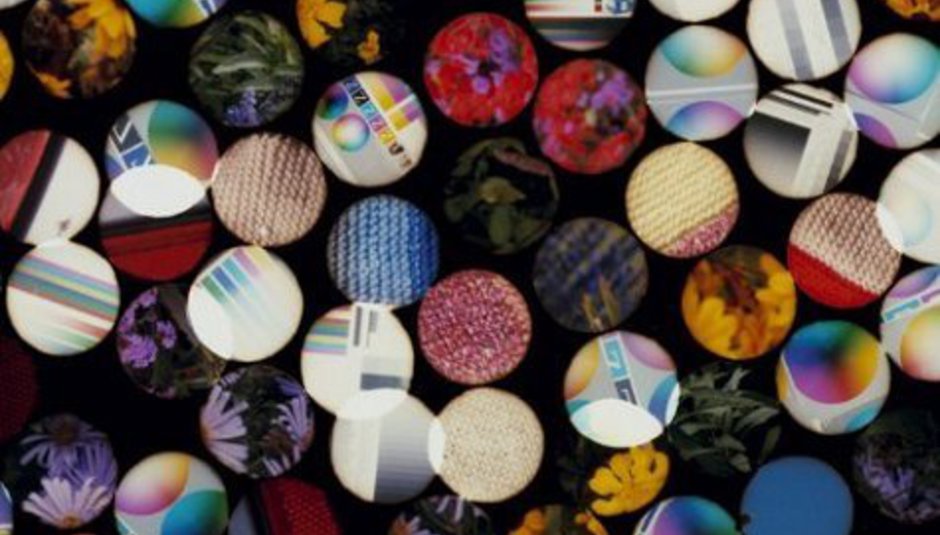 Do you see how, even when I am bumbling about at Latitude, still I Bring The Singles? SEE HOW DEDICATED I AM! You people are all part-time, or something. Let's have a fight about it.

‘A Piece of String’ begins with the sort of propulsive clatter and looped plucks that I quite happily sling in the box marked ‘irresistible’. Then I had a wobble because the vocals came in, and Cor, if they weren’t all DWAMATIC, YEARNY and SEWIOUS. And you see, I hadn't thought pomp would happen, it was the last thing I expected. Around listen number four, however, something clicked, and that was when I felt compelled to email the press person and send a line or two that almost certainly contained the modern internet term ‘omg’. And even though record labels and the People of Music could essentially not give two hoots what I think [and they are right in this regard], I sent it anyway; I was all a-flutter. Because ‘A Piece Of String’ has Good Drama, and Good Yearn, and Good Serious. And also because it has booming bass, a really good bit where he goes falsetto crazy towards the end, and some delightful lyrics about ‘shells ‘ that ‘dessicate’ [more words like ‘dessicate’ in pop please]. And it all ends abruptly in a way that seems to convey confidence. AND it’s all syncopated, and I love me some syncopation. And!

Now, do you want a new genre word? Because I have thought of one, and you are getting it whether you like it or not. I am calling this single 'histrionica’ and I have made that up just for Clock Opera. Lucky old them.

The first thing you need to know about ‘Born Again’ by Richard Ashcroft & The United Nations Of Sound, is that it begins with the line ‘Cancel my subscription to the resurrection’. The second thing is that a very amusing chap by the name of Fraser McAlpine, coined an organization called The International Federation Of Shut Up in response to it. And because I am nothing if not obedient, I have duly relabeled the Artist Info in my iTunes:

‘Younger Us’ is meditation on Japandroids’ younger days, which they wish to recapture. And though lost youth is a good subject for a single, I cannot imagine Japandroids' scampy younger days are all that far behind them. I mean, they must be what, 27, tops? Still, even I am not matronly enough to disallow some chaps their adulthood, especially when they have made a record like this. ‘Younger Us’ starts with the sort of intro you would expect a drummer to go ‘Wuh, tuh, thruh, FOH’ over; and it is nicely messy, even if it is a bit all MY yesterdays, what with it sounding a bit Dinosaur Jr. Urgent, pained and with some waily vocals that are quite effective, ‘Younger Us’ is good, if rather slight. Also, here is an amusing YouTube comment I found underneath the video:

Last weekend I got the chance to play Teach to some assembled young people, some of whom were as young as THIRTEEN. Apart from this affording me the aspect of a musical overlord [oh the power, it weighs on one, and oh how it pulses and threats] it also meant we got to review some singles together. And what luck, because one of them happened to be by School of Seven Bells. I chose ‘iamundernodisguise’, and let me tell you, no truck did they have with SOSB's CAPS-allergic whimsical spelling or spacebar mishaps; they were not impressed. This is mainly because they were ‘metal’ [teenage metallers are THE RADDEST]. They also managed to conjure up the perfect descriptive phrase for a band they deemed too wafty, too grown-up, too middle-class and – I am afraid to say – too boring. That phrase was ‘risotto music’ and I told them I would steal it and I have. As for me, I like SOSB, I think they are darling, and though ‘Windstorm’ is essentially them doing speeded-up Cocteau Twins without the gibberish, it is all eminently pleasant.

And now it is time for our almost obligatory French entry, which this week comes from Shit Browne, swears and all. It is called ‘Electronics’ it is about how electrical things (presumably les discotheques ou les synthétiseurs) make a person (but most likely une femme) want to move their hips, and how this makes you feel ‘manic’ because that rhymes with ‘ecstatic’ and Shit Browne know the English for both. All such rank linguistic snobbery aside [FEEL FREE TO SHOUT AT ME FRANCE, YOU HAVE HEARD ME TRY TO ORDER THINGS IN YOUR SHOPS], it isn’t half bad, even if these self-appointed turds have decided to bring back Madchester by way of Paris. I think the trouble is, I like to sing along with cute French people and their pidgin and half the time I am not sure if it is the singing along or the songs themselves that are good. By which I mean, you decide. Live version above, or listen here.

If you can get past the twinkly twonkly opening, ‘Ingrid Won’t Smile’ is something of a charmer. And though you don’t need me to tell you it is about a girl called Ingrid who is a bit of a mard, it is nice to see a band tackling stroppy wimmins; rather than ones with sun in their hair and wild flowers where their brain should be. It’s also got some very pretty brass on it.

Skandal and Black The Ripper are upset about jail, estates, the ‘cycle of life’ an stealin. They are very upset and it is serious. And you know, if I could stop myself from being puerile for a minute [OH GAWD, I CAN’T THO], I would tell you how ‘Everyday’ is hactually very good (cause it is). But sometimes when people are all The Streets this and The Harshness that, I go a bit silly and get the giggles. I mean, I’m sorry. But he does say ‘Fuck the Queen’ on it.

I have mentioned this before, but one of my favourite slatternly pursuits is to read all the personals in the Guardian, and marvel at all the Shopping Listing that is going on. For it seems to me a spectacular sort of missing-of-the-point to think you might find the perfect pash this way; all that prescription - all those strange criteria about the exact height/hair colour of the person you require - adds up to so much science, not romance. All that aside, I am the sort of woman who is pretty clear on What I Do Not Want, and fortunately it is all wrapped up in the gormless fizzog of Basshunter. And this makes things very simple, because I can point at him if anyone wants to know my thoughts. He is - and I risk sounding slightly mental here – the worst sort of man ever to occur. Mainly because he has simply NO CLUE just what an ENORMOUS SIMPLETON he is, and I feel sure if you were to waft a book under his nose it would kill him; all that clever would be the final blow. Indeed, having been recently introduced to the German term 'Backpfeifengesicht', it is almost heartening how little time it has taken to find someone to apply it to [look it up, you lazies]. Essentially, I ABHOR THIS MAN. Anyway, as you might expect, there are not one, two, three but four separate women trying to ‘get with’ Basshunter in the video. But it still looks like he is sat on the toilet doing a poo in this bit:

Nobody thought to tell me Dirty Projectors were R’n’B, hey what? But I think they are, in the same way that TuNe-YaRds might be. This is very slinky indeed.

A special twelve of ‘Angel Echoes’, with a remix from Caribou on one side and one from Mr. Jon Hopkins on the other. Have Caribou done any rubbish remixes lately? The answer to this question, everyone, is ‘no’.

Quite a departure for good old Toro Y Moi, as on ‘Leave Everywhere’ he has gone all 60s and garage-Spectorish. It sounds habsolutely nothing like the delightful ‘Blessa’, but it is still lovely.

Jamie Lidell - ‘I Wanna Be Your Telephone’ (Warp)

A not entirely successful exercise in metaphor, but still a marvellously messy funk-pop song. His last album is precisely 37% better than you think it is, and he is wearing a very nice pair of slacks in the video.

Los Campesinos! - 'All's Well That Ends' (An EP of 'reworkings’ on Wichita)

Wendy is on Twitter, here. Please don’t come and beat her up because at the end of the day, it really is all just conjecture.