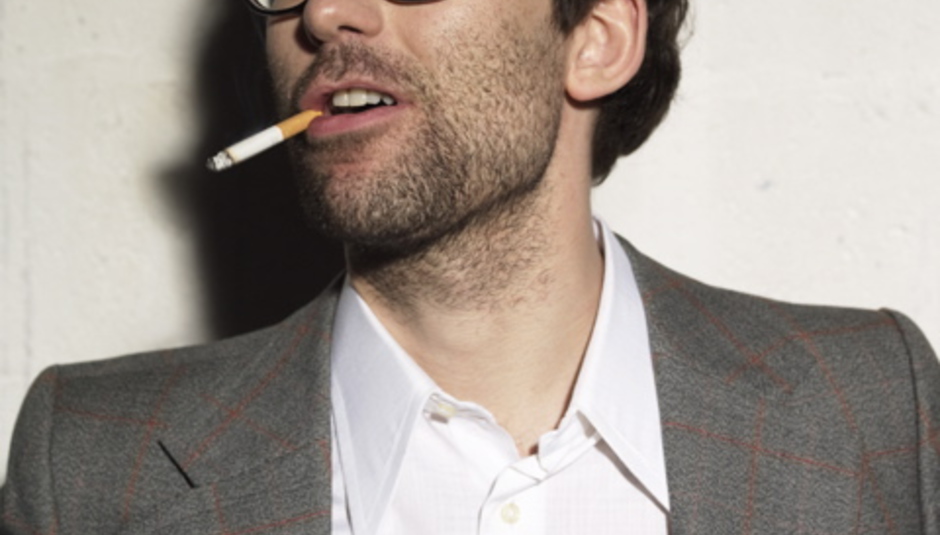 Jamie Lidell released his third solo album, Compass, on Warp this week and has a tour lined up to promote it, stretching, in his words, “from here to eternity”. Before he gets absorbed by the old clichés of life on the road (you can pick your own personal favourite rather than me listing a few), DiS sat down with him at The Hoxton Hotel to discuss working with Beck and eating scabby chorizo in Barcelona.

DiS: It seems like the ratio of soul-to-electro on Compass is more akin to Multiply than your first album Jim (Jim being more electro), is that how you feel about it?

Jamie: I guess so. I think its kind of a different album to both of them but I know what you mean. It’s more a return to my personal outpourings. I think the thing that stood out about Multiply was there so many different genres, all bumping heads. I realised that was very much my style and I got back into that on this album, whereas maybe on Jim I was putting a bracket round one particular style a bit more. I’m back to the eclectic.

DiS: 'Compass' sounds like a very personal track, what made you choose it to be the first thing you released from the album?

Jamie: Well 'Compass' is just a teaser for the album. The first single from the album is going to be ‘The Ring’. [‘The Ring’] is more up; it’s a bit more of a solid groove. ‘Compass’ is more of a rugged collage. I constructed a lot of it in LA, from ideas that I had from an original sketch, but even that was partially formed. It was like trying to paint a portrait of someone you’ve never met, you’re just getting a picture in your mind which never becomes completely clear. Chris Taylor really came in the mix with that one. Actually, ‘Compass’ really spans the whole creation process of the album. It started in LA with Beck and Feist playing guitars, and then Pat Sansone is playing keyboards that he flew in on the internet. There are horns and drums that I did in Canada and edited together with Chris, and then I added some synths and vocals in my home studio in New York. It really covers the whole location and personnel spectrum of the album that one. I like it for that; I think it’s the defining track of the album, if there were to be one. The Ring is the single because it’s more biting; it’s got more of a funk.

DiS: ‘The Ring’ feels more in keeping with the rest of the album, ‘Compass’ is great but it stands on its own somewhat.

DiS: What was it like working with Beck on the record club project?

Jamie: It’s great, Beck is really in his element doing that kind of thing, from what little I know of him. The very first time I met him was in 2006 when I was the opening act on his American tour, he knew who I was and came to say hi. I remember once we were soundchecking and he pulled me onto his tour bus and showed me this video he was working on. He’s always this guy who gets really excited about what he’s doing and wants to explain things to you. When I came over for about Record Club he was thinking of doing a Brian Eno album, either that or Ace of Bass or Skip Spence.

DiS: You went with Skip Spence in the end right?

Jamie: I never heard that album. The original album is amazing; some dude from Jefferson Airplane that lost the plot. He got put away for an axe attack on one of the other band members, some kind of LSD mayhem. He bust out of hospital on a motorbike; made that album and then disappeared for good. It’s a crazy story; and it sounds like that, it’s a really tortured album. It’s really exuberant and then it gets crazy lost to the point where the guy can hardly hold a song. It’s definitely informed a lot of Beck’s music as well. When I heard the originals I thought “that sounds like an intro to a Beck tune right there”.

DiS: Were you planning to have Beck on your album before you did the record club thing?

Jamie: No he actually called me before that to see if I wanted to start a record, so he kicked it off. I had wanted to make an album but I’d been procrastinating a little bit. But also I’d moved from Berlin to New York. So that was it, I’d just settled in New York and then Beck called. A lot of the things on the album have that crazy timing and good fortune to them. Working with Beck was great and I really wanted to work with Chris Taylor too. When he came off the road I was able to have some face time with him. I ended up producing the record myself, because I only had about ten days face time with Beck, and about two weeks with Chris. I had to piece together all the bits and parts I’d done with Beck and Chris and Feist and everybody else. The whole album’s gestation was six months so the rest of it I was doing it alone and getting input from friends and people I could trust. That’s where Chris came in; I just really respect his music and his opinion. I ended up writing all the music, the only song I didn’t write lyrically was ‘Coma Chameleon’, which Beck wrote. The first time I went round his house we ended up writing four songs and that was one of them. There are three other tunes lying in pieces on my hard drive.

DiS: Do you have any plans to do some more stuff with Super Collider?

Jamie: I haven’t spoken to Christian [Vogel] in a fair while. No plans really. It’s always theoretically possible, but I think the reality of my tour schedule that’s already being lined up from here to eternity means I literally have to get him to come out with me on the road and sit in the back of a tour bus with me writing an album. The reality is; I’ve wanted to go and do this solo thing, perhaps put it as my highest priority. Whereas back in the day Super Collider was the biggest priority that I had, and I didn’t have a solo career back then. I never say never; I’d love to work with Chris again, I think he’s a fucking genius and a great friend. Maybe when we’re old men, drinking some rioja and chewing on a bit of scabby chorizo somewhere in the sweaty end of Barcelona we’ll be like, “I think it’s time.”

In Photos: The National @ Royal Alber...