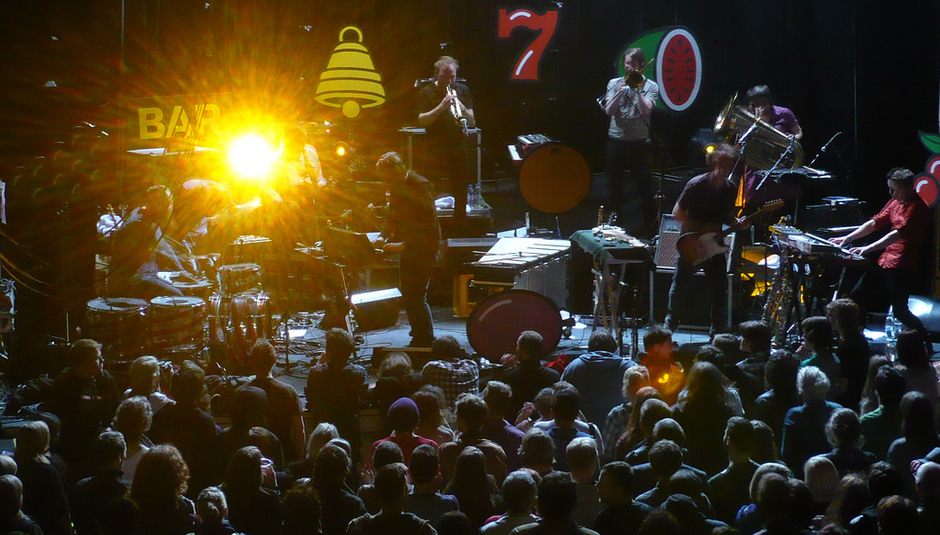 What do you know about Norway other than the price of beer is around three times the annual GDP of Togo? Well, it's cold in the winter, but the people are warm all year round. That it won last year's Eurovision Song Contest. Harald Hardrada and all that. Yeah. Well, as you probably know, there's more to this country than black metal, and there's more to Norge than Oslo.

There may be have been something of the 'Second City Syndrome' in Bergen, but it needn't really be this way. Or rather, it's understandable why some degree of regional identity is necessary in Bergen - there's plenty to be proud of. Whilst Oslo is the city on many non-Norwegian lips, Bergen and its musical exports are numerous, plentiful and certainly don't pale in comparison to the country's capital. Kings of Convenience and with them Erlend Øye, Datarock and more recently the extravagant trio Ungdomskulen are among the most prominent and indeed best Bergen artists but there's a bunch more on the way.

The beautiful, cobbled and often wet streets of Bergen and surrounding mountains first witnessed Bergenfest in 1993 and since then it has expanded along with the local music scene. 2010 also sees the event twinned with Leicester's Summer Sundae Weekender – and initiative from the Association of Independent Festivals, designed to promote links and exchange culture (in the form of music) between both festivals.

Though the majority of festivities were to take place on Friday and Saturday, a few bits and bobs were planned before. Tuesday saw Don McLean and Lou Reed's Metal Machine Trio, Wednesday Ulver and Slim Cessna Auto Club and Thursday The Proclaimers and The Hypnotic Brass Ensemble who happened to be my personal picks for the evening's entertainment.

Traipsing into the Logen Teater sandwiched between a gaggle of merry Scots in suitable 'Jocks On Tour' attire, it could only be The Proclaimers. Time has been kinder to one of them, I'll say that much. What else I will say, however, is that all involved have A Good Time. The classics ('Letter To America' etc.) naturally garnered the greatest reception but it was hard not to feel a twinge in the 6.25 per cent or so of my body which is supposedly Scottish, during 'Scotland's Story'. 'I'm Gonna Be (500 Miles)' also did something to my inner self, though I have yet to find the full results of such.

The Hypnotic Brass Ensemble's brief performance in the Hotel Norge Festivalbar was enthralling. All but one of the brass troupe are sons of the jazz trumpeter Phil Cohran (Wikipedia, 2010) and each performs with such boldness and gusto that I've rarely seen emanate from a brass instrument. Granted, I've seen mostly middle-aged bearded white men play trumpets and trombones, but this is a bit more rabble-rousing and flat-out entertaining. The Sousaphonist (oom-pah-pah) looks to the back with eyes scarily focused. The rest dance, prance and bob up and down in every direction, but never into each other. The organised fun and crowd participation I could probably do without but everything else, I'll keep. Thanks.

Now the real stuff begins. Events of the musical variety today are preceded by an excursion via cable car to the tip of Mt. Ulriken, with Eirik from Kings of Convenience and Fred from Datarock which, thankfully enough, involved both lunch (8.5/10), wine (8/10) and an incredibly hard to open door (1/10).

Before the shows proper, myself and a couple of other English journalists are hastily hauled up on stage to talk, briefly, about the festival and related issues for Norwegian radio station NRK, and the benefit of a hundred or so others in the room. Fine, I thought. Until I have a look around at those gathered around and see Leo Sayer, which puts me on edge. I do not exaggerate when I say this is among the Top Three most terrifying things to happen to me.

Public bullshitting over and a quick buffet dinner consumed, a last minute dash to Randy Newman at the Peer Gynt was prevented by ahem...navigational difficulties, but some directional composure was regained to make it back to The Garage Bar, which was replete with the aforementioned Øye. There is just something about the spangly, extensively-lashed and dolled-up Geordie Beth Jeans Houghton. What happens – and there is a lot of this – in between each song is confused, messy and sometimes a shambles. Yet, as soon as her smooth, low tones begin to break through the backing, the faffing around is soon and easily forgotten. The resident sound man does the typical sound man thing of giving off an air of not being too bothered about the quality of the audio but Beth manages to rise above the initially muddy rhythm accompaniment, with 'Lilyputt' being the peak of her performance. The Kvarteret is one building where the average age of the crowd is significantly lowered. It's a student centre for various arts, divided up into several sections so this fact is no surprise. All in all a pretty neat place, giving off that 'festival within a festival' feeling. Whilst early on in The Portico Quartet's slightly more improvised set than they would have hoped (they arrived in Bergen instrumentally deficient...) there are enough seats to take pick (think: modern, concrete-lined jazz club) by the time sticks are upped, fairly early on, we only get a small taste of their rumbling, lethargic, lilting and nocturnal rhythms.

Jaga Jazzist's One Armed Bandit could be the finest record to come out of Norway this year, but it isn't short of a rival. Again, the centrepiece of their performance in the chock-full Logen Teater is the red-bearded drummer, Martin Horntveth. It's a wonder his upper body isn't four times its normal size as he bashes, beats and near-dances his way through their catalogue. The stage is liberally adorned with the obvious but welcome – slot machine characters which light up every now and then, accompanying the various frantic and more serene passages from the Oslo ten-piece. At times interminable, the ear is caught constantly off-guard by their myriad transitions of tempo and tone.

Whatever happened after scuttling off from the bizarro-by-the-bucket performance of Akron/Family must have been an improvement. Not due to a lack of tangible quality, but partly because all I could do was frown, especially when the headbanded one of the trio, Seth, starts blowing into a pipe to make previously unheard noises. Bemused.

Serena-Maneesh's focal point, along with their dirgey, drawn-out shoegazing is Hilma Nikolaisen, the seemingly seven-foot tall ice maiden of a bassist whose movement is nothing other than sickness inducing as she moves back and forth with dedicated regularity. I spend a good 70% of their stage time staring, intrigued. Her brother also happens to be the singer and, not to be outdone by his bigger sister he moves around more chaotically and wildly in a home-made poncho. 'Ayisha Abyss' seems to last a lifetime but this is no bad thing as I'm more than happy to be lost in its pulsating, driving rhythm. It's a shame it had to end and, as alluded to earlier, the tracks showcased from their current record, S-M: prove what a wonder it is.

Returning later to the Kvarteret and it is bustling. DJs, club nights and the odd group of partially inebriated Norwegians have taken residence in the many ante-rooms of the building, and wandering from performance to performance is the name of the game. Lindstrøm and Christabelle were present in my eardrums enough time for me to work out that they're an act that people don't mind getting hot, sweaty and close with one another to. It was also enough time for me to be asked by a burly, leather-jacketed thick-set bull of a man if I was Swedish. English, I said. The diplomatic answer? The curious ambience of the Garage Bar is responsible in part for the strangest non Leo Sayer-related experience of the weekend. Electric bluesman Duke Garwood, whose look can be best described as 'ruggedly confused' or 'worse for wear' tried his hardest to play together with his drummer. Both Garwood and percussionist had timing issues, but unfortunately they rarely coincided. This is combined with a woman possessing eyes the size of dinner plates jumping up on the stage to bear hug The Duke and mockingly play guitar by his side. This probably continued after we left. Can't imagine how he felt. Where Bergeners The Megaphonic Thrift go wrong is also where they go right. Whilst their current record, Decay Decoy, has a degree of urgency in its clout, at times it lacks it in pace. This isn't such a problem on record but can limit a bit live, especially with only one full-length to their name. As such, it feels like the set is frontloaded, but the inclusion of 'You Saw The Silver Line', with its swirling, slurred and slack words don't fail to raise the surprisingly-not-busier Garage. With more than just a hint of the classic American indie of the '90s – guitar tone = Sleater Kinney, approach elsewhere = Sonic Youth – it's a promising treat.

Belly dancing is not an art you would expect to see in Bergen this weekend, but that's what Mazaj are here for. I think I'd speak for more than myself if I were to say that the general idea of the music and choreography is conveyed in less than the space of a single song. An unusual distraction, but that is what you are eventually driven to, should you hang around too long.

Once again released from the bowels of the Garage, the next destination is the relatively distant USF Sardinen which, you can probably guess, used to be a sardine factory some while ago. The pillar and etchings outside the building remain but there is no lingering stench, other than what comes from The Heavy, whose geographical whereabouts are hard to locate until the singer lets something slip about The West Country. Having previously toyed with the idea of seeing West Bergen lads John Olav Nilsen & Gjengen, the emergence of a 50 metre queue in no time at all suggested that a) they are more than well loved in this city and b) seeing them was unlikely. A shame.

Local-ish hip-hop act Karpe Diem demonstrate an unrivalled joy for performing. Though initially redolent of Goldie Lookin' Chain (one of their number was gangly and goofy...) they hit their stride with a few stuttered words about basketball, at least I think so. It was accompanied by a dance of some description. Having no idea of the lyrical content of anything they do, it's not impenetrable, but a tough nut to crack. Easily the youngest crowd of the weekend and most dense.

Bear In Heaven, who I incorrectly thought were Scandinavian upon first listen, do give off an air of weird Nordicicism more than anything else. The unnaturally high-pitched vocal tones are reminiscent of recent tour partners Oh No Ono and, whilst the lead man's moustache may be a nod to masculinity, the rest is a distinctly more gentle, beautiful beast and a suitable note on which to end this pretty perfect weekend on the West Coast. Some visuals would have gone down well here but closing your eyes and using your imagination works fine, too.

Many thanks go to the ever-calm Frank Nes, the Bergenfest organisers the Bergen Tourist Board, the people of Bergen, the City of Bergen and anyone else who was there over the weekend.