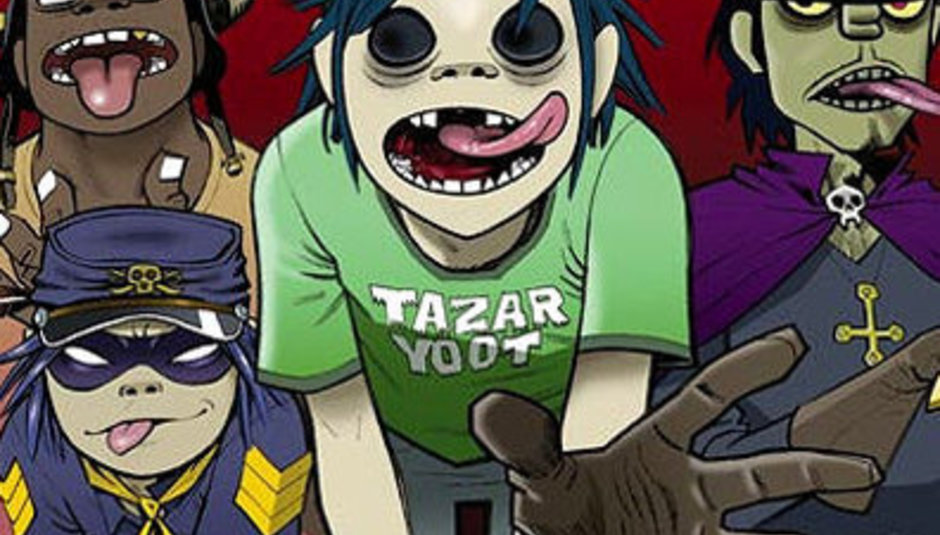 Gorillaz used to be a virtual band. Everyone knew that it was a Damon Albarn-helmed collaborations project tied in with visual direction from artist Jamie Hewlett, but it was presented as being the music of a group of cartoon characters. This was important not just as a marketing gimmick, but also in terms of the music itself. By dissolving his personality into the characters, Albarn was able to sing things that would sound a bit ridiculous coming from an aging Britpop star. Performances were a spectacular hybrid of state-of-the-art animation and live music. It was novel and clever and A Good Thing.

Whether this is a permanent change or not, tonight all of this goes out the window. The visuals are moved, literally and figuratively, to the background, and the focus is shifted to the performers and, unfortunately, Albarn himself.

To be fair, when you have 50% of The Clash, two drummers, a seven-piece string section and much more on stage, it'd be a shame for people not to see them. Paul Simonon is particularly impressive, especially on the appropriately Clash-y dub groove of 'Last Living Souls'. By far the biggest thrills of the night, though, come from the quite incredible list of vocal cameos. When Stylo brings on both Mos Def and Bobby Womack, the combination of their charm and sheer vocal talent makes a mockery of all of the songs on which Albarn takes the lead. The pattern is repeated again and again - tolerable songs rendered cringeworthy (or worse dull) by Albarn taking the limelight interspersed with crackling excitement as De La Soul, Kano and others explode onto the stage. Fully cameo'd up versions of 'Feel Good Inc.' and 'DARE' are intoxicatingly raucous, whilst decent-enough tracks like 'On Melancholy Hill' are dreary without a charismatic enough frontperson to carry them.

Another highlight comes as an Arabic orchestra is literally wheeled on to play a standalone piece before joining the full band for a further song. That the former piece trumps the latter in engaging the audience reflects the near-inevitable fact of the collaborative whole being less than the sum of its parts. In fairness though, it's the sense of being overwhelmed that sweeps you along in such an "event" gig as this; there is very little call for subtlety.

The use of videos is disappointingly unimaginative. Only on 'Dirty Harry' do they add anything tangible, with the children's choir of the choruses represented by a cartoon classroom jostling each other and clapping along. 'Empire Ants', on the other hand, is accompanied by a projection of the song's title. What would be pointless for any other band becomes a slight insult coming from a band that's supposed to be as much of a multimedia "experience" as this. As for the Gorillaz characters, they are barely represented at all, save for when the existing promo videos are lazily synched to the hits.

It all ends on their debut single, the now-decade-old 'Clint Eastwood'. Whilst a great song, the absence of Del tha Funkee Homosapien renders it a terrible choice of set-closer, leaving his verses to be played underwhelmingly from the record. As the video here ends by visually introducing 2-D, Murdoc et al, it's a saddening reminder of what's been given up.