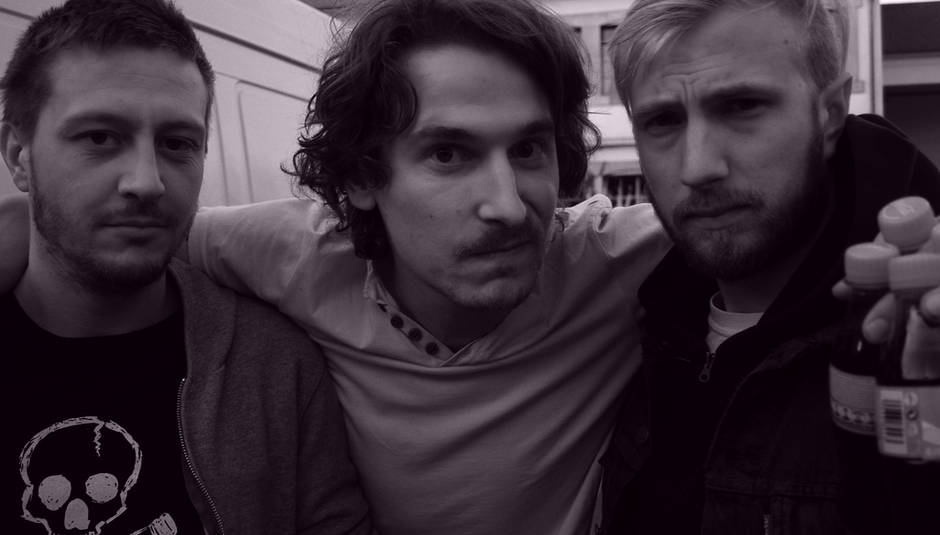 Some glimpses into the road-ravaging world of 65daysofstatic...

“Glory, glory what a hell of a way to die.” (Traditional)

After breaking the land speed record for eating an Easter Sunday dinner and having 2 glasses of champagne for breakfast (this should be how all tours start and most mornings) I’m ‘standing at the load out’ and I’m feeling pessimistic about the load space on the bus. Has anyone ever written a song about being doubtful of fitting all the gear into loading bays? Not very romantic, I guess. Not one jot. We have no trailer this time. Which means all of the backline has to be lifted to chest height and somehow slotted into 4 loading bays on the side of the bus. Joe, unusually nervous, is doing what he does best. Packing gear into small places. I know that this is his favourite part of the day and possibly his favourite part of being in a band. He has a top ten of the best van packs of all time. I spend this time flitting between carrying flight cases and boxes down stairs from our flea pit, no good rehearsal room and looking for my hat. With a little improvisation and some cold hard logic it all goes in. Paul, Joe and I have the same idea at the same time and sneak into the bus with the intention of getting some good bunks. We have 14 of them and with 8 people we have room to spare. I decide on the right side of the bus in the middle. These are the wider bunks. There are two 3 areas of potential noise/havoc/cavorting most of which I will be involved in and they are situated at either end of the bunk space. I figured I’m on to a winner. With Simon not being here we reserve him one of the slightly longer bunks on the end. He is over 6ft and doesn’t fold up very well. Where is Si?

We’re finally moving. It only takes for us to go as far as the dual carriageway until someone shouts they’ve forgot something. Some books and a care package. SS (Tour Manager) consults his watch and then turns to me to ask ‘Is it worth going back?’ ‘It depends on the books and whether you want to tackle the Sheffield one way system again?’ I say. He replies in the negative. They are eventually found and I make my way to the front lounge and settle in with a beer.

Coach, our driver, has offered us the fridge full of beer, white wine and a sneaky bottle of Jack to calm those frayed ends. Most stick to tea.

I drink tea for breakfast.

The ferry journey is spent teaching and relearning card games, drinking and become more and more spun out by the continuous and unignorable rolling news channel on a 56” flat screen above our heads. Something about a dead pro apartheid leader (“Heroic and Iconic” – Sky News Anchor, “Racist and Dead” – Me)

I awake to a discordant bing bong. The cabin serves as a reminder of the close proximity in which the next few weeks will pass and is useful in highlighting the complete abandonment of any kind of personal space. We arise and go looking for the bus. I forgot we’re in Belgium. I assumed we were landing in Holland. The morning is grey and flat and is spent reading up front with Si and watching the uninspiring Belgian countryside slip pass. I offered up my well documented opinion on the landscape to Joe at a brief rest spot. He replied ‘It is the equivalent of not being able to get a hard on after loads of beer’. Yes. That is what he said. Erectile dysfunction analogy, anyone?

It’s nice to watch so much road go under the bus as we plow on towards Nijmegen. It feels quite good to repeat that old clichés of ‘eating up the miles’.

Si is working on remixing our single. Paul is creating a pre show mix. Bunn (Merch), Frank (Hero Tech) and Deaf Pete (Sound Guy) are delving into the bus’s hard drive and Joe and SS are asleep. All quiet on the western front.

I bore Si with my limited knowledge of the Allied Advance from Eindhoven to Nijmegen during Operation Market Garden as we approach the outskirts of Nijmegen. Every time we go under a flyover Si says ‘That one was a bridge too far’.

So with that in mind and a couple of hours to kill everybody goes and does their own thing. Si and I go looking for the famous Nijmegen Bridge. Being without internet and therefore unable to use GPS we rather craply photograph the map from the computer onto my camera. We found it and I realised I’m slowly but surely turning into my Dad because I took several pictures of it.

Back for load in and set up. All the gear is working. Batman.

I always find meeting other bands, who you tour with, a little tense at first. It always seems like an exercise in sizing each other up. So when Joe met the guys from Kong over the fitting body of the epileptic lighting engineer it was probably doubly strange.

Hats off to him, Deaf Pete and Jon from Kong for being on their shit and realising what was going on found his drugs in time, kept him from hurting himself and called for an ambulance. It really was very quick and handled very well.

Credit to all their mums. There is definitely chemistry between us. We have a history. We don’t get to see each other much but you can be sure that, when we are near, they will find us. They want us for something that we cannot possibly facilitate and that must be very frustrating. They want our attention. They crave it. You think we can just flounce around on those beautifully smooth autobahns all day, without doing anything illegal and feel indignant for being stopped and searched?

This is the real world, Smokey.

This morning’s wakeup call was from that old bastion of unpredictability, pent up aggression, side arms and tazers, The German Police. I can only take solace in the inevitability of it all. It was only yesterday that Paul received a good luck text from Avalon Gold expressing his hope that we wouldn’t have any meetings with them. Fortunately the officer in question was a “Real-Life-Metal-Head” and only wanted to talk to our driver about Motorhead and W.A.S.P. I quietly hold my breath, at the top of the stairs, until he decides he’s not going to go through all our stuff and wake up everybody who, by the sounds of it, are having a well earned sleep.

Denmark seems to be in the final throes of winter. I found evidence that spring still existed yesterday in the form of a river bank filled with bluebells but travelling up from the ferry towards Copenhagen all I can see is purple browns and muddy greens.

It’s almost embarrassing turning up outside a venue when your bus is bigger than it. But that is what we’re faced with today. 13m x 7m of Shit Island Clubbing. That’s what the sign outside says. It’s a lovely venue.

With small shows one of the most important things is making sure you are using the space to its full capacity. What that means for us is filling it with as much equipment as possible and give yourself enough room to not swing your headstock into people nearby.

I don’t have that problem, of course, and have taken up most of the stage with my GIANT DRUM KIT.

Hopefully the 1st band won’t show up and all our gear can stay where it is.

They didn’t. Thanks, Profound Venue.

Talk over dinner was about the set list. Should we be playing more old songs or should it reflect what we’re doing now. NOW, NOW, NOW, NOW. Last night’s Tiger Girl was one of the greatest stage experiences I’ve ever had. It had something to with seeing Paul trying to play drums with a strobe light right next him. He looked like he was trying to stop his whole world from falling apart.

A gloriously sunny day on the north bank of the Elbe. From the window of the dressing room of the Hafenklank I can see enormous tanker ships lumbering towards docks laden with shipping containers as pleasure boats, tourist ships and forklifts scurry around them like minnows around something bigger than a minnow. I’m going to say a whale to be sure. Wow. What a way to ruin a perfectly good descriptive sentence.

After managing to sleep all the way through the ferry from Denmark last night and, to my surprise, happening to be awake before everyone else this morning, I dash out for a late morning stroll. Found a nice Café down near the fish market where the waitress spoke better English then I did. I would have found it funny but it was early. Plus she was pleasant and I’m pretty sure I smelt bad.

Joe thinks someone is secretly Febreezing us in our sleep. I assure him it’s not the Stazi.

Having 2 hours to waste before the load in we head towards St Michaels church. A fabulously unlucky building that was from the 16th century but due to a rather ecclesiastical lightning strike and a careless construction worker it’s now only a century old. In the crypt we found the grave of one of the less famous of the Bach family and on the top of the tower, after a rather exhausting trip up a bazillion stairs, we find a quicker route back to the venue.

The injury list has started in earnest with me cracking my finger (a trademark of mine) which resulted in two rather fetching scars that look like parentheses and Paul somehow managing to pull his back out. The first and guaranteed not the last. I light a candle in the apse of St Michaels’ to represent a safe trip.

It’s not my particular can of beans but we need all the help we can get and I’ll, certainly, buy that for a dollar.

A suspicious amount of fitness is going on in the group. From Paul and Neil running together to Joe and his tour of European swimming pools. Anecdotes to follow I’m sure. It’s all rather grown up and I like it. I, however, am trying to counteract all of this by starting drinking at 3pm.

It’s only a milomometer away.

In Photos: Live at Leeds Festival