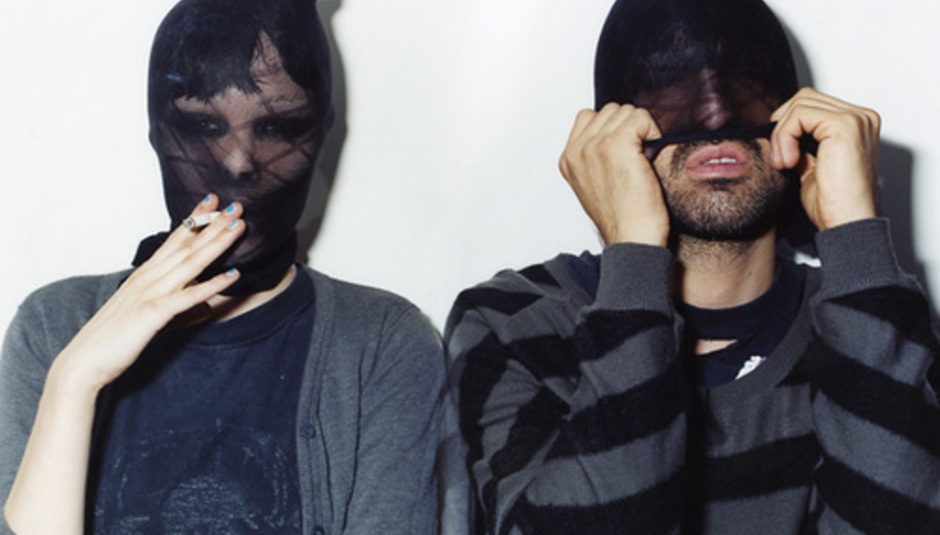 On a sunny day in April (last Thursday) DiS got invited along to a listen through of the new Crystal Castles album, Crystal Castles, set to be released June 7, on Fiction (full details here). It shares its name with previous album Crystal Castles (which came 15th in DiS's albums of 2008) but we'll leave others to make the jokes about lack of creativity in titling. Their debut saw them attracting fans everywhere, appearing in Skins and singer Alice Glass topping the NME Cool List. More importantly, the album was pretty great (DiS gave it 8/10) and the live show was what can only be termed 'visceral.' All in all, a rousing success. Hopes are therefore on the upper side of 'high' for this second album, right?

Scene setting: Arriving into the murky basement in East London, a projector, a spread of nibbles and two massive speakers were set up. All the better to hear the bass. For the purpose of this experiment we had a control group, our friend Nat. She did not know who Crystal Castles were, but was made to give a one sentence opinion on each track. Her verdict lies below the “more informed” verdict of DiS. It even has emoticons.

The album opens on that piercing audio shrapnel the band often deploy, before a heavy electro beat drifts in. Those phased, distorted vocals are back, but these seem harsher. It's probably the soundsystem, but this just feels louder – it's certainly denser. Those noise elements that Crystal Castles always claimed were an influence are a lot more audible now. What sounds like fragments of conversation have been turned into rhythmic pieces of the song. There's a pounding bass drum – it's almost nightmarish. Towards the end more melodies start to emerge from the discord, from slow burning synths. This isn't a comfortable listen, and it signs what is to come.

Nat's opinion: “Sounds a bit like when you get a zip stuck in the washing machine :-(”

This one sounds more like their debut – it seems to be using the same synth sound that ran through a lot of that record. There's a greater density here though, both of ideas and music. The vocals are smoother – I have the phrase “less bratty” written in my notes. Much of this album feels more mature, and developed, as if they now have the confidence to take their ideas where they want to. 'Celestica' feels like it could be a single, played everywhere remotely trendy.

The first single, and it's noisy. Full of heavy heavy distortion on it's synth base. The vocals sound like a “screaming gremlin” according to my notes. This might not be the best way to bring in new fans, but as a statement of intent it's pretty grand. There seems to be strong noise and punk influence on this track, but the aural assault is over quickly. This whole album seems aimed at adding yet more dynamicism to their live show.

Nat's opinion: “Sounds a bit like a baby being sick to rave music :-I”

The opening of 'Baptism' takes you back to mid 90s trance music – you can pretty much see the lasers, the podium dancers and the gurners in overly baggy smiley face T shirts. A percussive synth burble comes in, with more distorted vocals. Each track seems to alter them in a different way, as if it's more of a testing ground than an album. Either way, it all ensures that any lyrics are all but indistinguishable. Not that it matters anyway - Crystal Castles is about sounds, not words. There's a 4/4 pounding bassline, the song coalescing into something bigger. It should be “big in the clubs” given its mastery of dance music peaks and troughs.

Nat's opinion: “Sounds like a game of Pong on one of those old computers :-)”

Heavy again. The vocals sound almost exactly like Jonsi out of Sigur Ros, so much so you'll find yourself doing a double check. There are spaces, breaks in the noise, gaps that allow spectral synths to come through. 'Years Of Silence' fades out into those high pitched note heavy parts that make it sound like you're drifting through galaxies, like on 'Number 1' by Animal Collective.

There's an almost grime backbeat to this, and the opening sounds like menace, guys with a pitbull on a chokechain by a burned out Mondeo. Claps and a distorted vocal sample carry the melodies, sad and echo laden. It's possibly the weak link of the first half. Crystal Castle are almost always a mix of the nostalgic and the futuristic, but this feels like neither of those. It just feels spare.

A more conventional verse / chorus feel takes over 'Suffocation', although the vocals are still all but incomprehensible. It's clearly a conscious decision, the band using them as an additional instrument, not the driver of the song. A bassline sine wave gives the song weight, the lead synth part mirroring the vocals. It feels like the soundtrack to a JG Ballard short story (a classic dystopian electronica reference point). There's a coda to the song after a dead stop that feels tacked on, and breaks the otherwise well designed progression of the record.

Nat's opinion: “Sounds like a trippy version of Lykke Li :-)” Typically this album features more layers within the songs than the debut– it's hard to envisage them being played live without a certain amount of backing tracks deployed. 'Violent Dreams' feels a bit disjointed in comparison to other tracks where the progression between parts flows a lot more easily. The vocals here sound male, p'haps meaning Ethan Kath is getting a chance to use his voice. This one builds and builds and builds, but to almost nothing, and then stops. An anticlimax, or another defiant snub of song conventions? You decide.

This one uses that effect from 'Crimewave' where they repeat a phrase but pitch bend it up and down – the song feels like it's preparing for attack, but instead just twists into a sparkling chorus. Messing with perceptions again. The noise influence doesn't stand out as much here. It seems to drag on past where it should stop – dance music relies on a balance of progression and repetition, and this one is toppling over.

Violent squirts of keys lead us in, sounding like paintballs hitting a wall. Someone could plot a direct line between 'Song 2' and this if they tried. It all feels a bit 'punk' and angry. Distorted, hidden vocals sing out of a basement somewhere. Some / many of the songs here are uncomfortable to listen to, making you feel on edge, uneasy – this is one of them.

Synth lines unfurl, and this feels like it'd be better heard live, embedded in a crowd with perspiration dripping from the ceiling, where the air has gotten dense enough to taste on your tongue. The vocals aren't as buried, but Alice is still rendered as good as mute, verbally. Whatever sentiments are expressed here, they're kept secret through computer effects. 'Pap Smear' is one of the few here that feels like a return to the sounds of their debut. For an album that puts little stead in melody, there are strong lines here.

The simplicity of the debut is largely abandoned. Crystal Castles have doubled the ingredients, adding more layers; of keyboards, of skronk, of noise, whatever it needs. Somewhere beneath those things is a pop chorus, under the haze. A 4/4 drum pound drives 'Not In Love', and it's faster. This, again, could be labelled 'filler'. Given there are 14 tracks, it could have been dropped as a B-side.

Descending lines repeat round the loops until it starbursts into a song, the thing going twice as fast, whirling over the chords. Phasing hisses and more dissonance stomp in, before the original tune pounces back. That tension between noise and melody is crucial to how this album works, and whether it succeeds or fails. It's clearer here than anywhere else.

Nat's opinion: “Sound like a computer having a seizure :-(”

Crackles and rattles and crunches dissipate into more synths. And that word has appeared a lot here because that's what this album is made from. All the different program settings explored on each one, every production and sound effect used and tricked out to make something else, something other. That's what the band seem to be doing – exploratory exercises on what can be done with their influences. Washes of noise loop round until the PR realises the CD is skipping, saying “It just keeps on going like that for another minute.” There's something in that. We walk past the sandwiches and the crisps, out of the basement and the gloom, into the gleaming sunlight.

Nat's opinion: “What I imagine it to sound like inside a womb :-)”

Crystal Castles seems to have something to say about the way noise can interact with conventional, harmony led electronica, much like HEALTH and others do. It makes the album, at times, uncomfortable, squirming, dissonant – but never uninteresting to listen to. To properly chew down on whether it all works together, cogs interlacing as a record is something that needs time, and more listens. Whichever, going by the comments of the control group, it's unlikely to gain them any fans who've already dismissed them as hipster tryhards. For the rest of us, it'll beguile or bemuse, as Crystal Castles start to extrapolate outwards from the lines of their first album template.