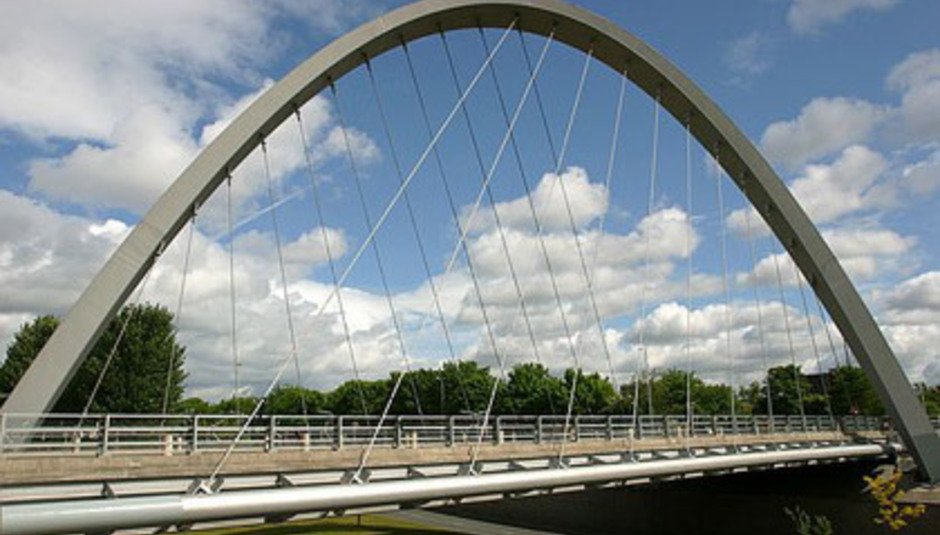 The second installment from our scribe in Manchester in our continuing series of local scene reports...

When I last left off, I couldn’t have foreseen the cataclysmic events that would occur just a few weeks later. As it is, I write this column with a long shadow hanging over Manchester; yes, Jilly's Rockworld on Oxford Road has finally shut down. After sustained declining attendances and increasing debts the rock club, and its sister venue the Music Box, are no more. I’m sure many reading this have their own memories; why, I remember when…oh and there was also…but no, there was that time…you get the picture. This month’s column is unlikely to fill the void for those of you weeping black eyeliner into your trench coats, but it might, possibly, help you move on…

A number one online stopping point for all things Manchester and music is the excellent ManchesterMusic.co.uk. Cath Aubergine, the site’s managing editor, will be a familiar name to Manchester live scene regulars; a true live-obsessive, she kindly documented her recent venue trawlings for us right here. And yes, she went to every one of these gigs.

“Of course there’s loads of electronic music around right now and a lot of it fronted by incredibly cool girls, which is nice- Manchester’s myriad scenes over the years have generally tended to be rather blokey. May 68’s single launch was quite a party with style-icon-in-waiting Jude Wainwright leading an energetic set of new-wave disco in Retro’s basement. Later that week at Sound Control, The Switch’s flickering psychedelic post-trip-hop and Belarusian / Ukrainian ex-pats Rubika with their Nico-meets-Giorgio-Moroder 80s-flavoured electropop gave visiting headliners (albeit 33.3% Mancunian) We Have Band a run for their money. Elsewhere, From The Kites Of San Quentin have been mixing up dubstep, Portishead-like vocals and Warp-style glitch-hop all over town of late. It’s not all about the girls though: promoters Blowout gave us a brilliant set from Audio Supply, three small hairy blokes from Oldham who sound like the missing link between Holy Fuck and psychedelic 70s cop-show themes, whilst a Wotgodforgot performance from Denis Jones saw the beardy genius take his eclectic looping sonic origami to new levels.

All those boxes and switches - what about your good old fashioned guitar? Fear not, there have still been people doing interesting things with those too. On that same Blowout bill were the mysterious Books doing stirring slow-build indie. And on Easter Sunday High Voltage showed they’re as on-the-case as ever with a particularly intense set of post-shoegaze from Young British Artists, bedsit-poet-with-bite indiepop from Help Stamp Out Loneliness and gothic skiffle from Crooked Rooks. But the boys that had early arrivals dancing were The Janice Graham Band, Wythenshawe teens with an incredible mixture of Northern Soul, ska, jazz and even carnival samba going on." Not content with fronting psychedelic-shoegazers The Modern Painters, or performing bass duties for Engineers, Daniel Land has released a stirring collection of ambient recordings under the James Joyce-indebted name riverrun. Pieced together over ten years, the eventual solving of Land’s personal puzzle results in a shimmering gauze of overlapping textures and rich, focused shifts of mood. One for the Articulate Silences lot certainly, but may surprise others too; out now on Saint Cecilia Records.

Day For Airstrikes- Into The Comet Into The Comet has taken criminally unheralded post-rockers Day For Airstrikes to hell and back. During writing and recording the five-piece have replaced two members, seen their label go under and had their gear stolen. Thankfully the ends have justified the means, the group managing to walk perfectly across the tightrope between the intricate rollercoaster passages of, say, Don Caballero, and post-rock’s more typical cinematic bluster that, when done right still sets hairs on end. Three-piece electro-pop outfit Run Toto Run will most likely end up being shoehorned in with team Florence/Marina/Ellie, which is a shame. ‘Hater’ shows that for one thing, their female vocalist shares the power Ms Welch possesses but also the subtlety she doesn’t; whilst for another, their sharp, concise hooks are impressively lean, caring not for overblown gimmickry. Out on May 24th - www.myspace.com/runtotomusic

With Cath onboard for this installment, and a couple of other Manc-centric sites having been launched/revamped recently, it seems a perfect time to draw you to the city’s presence on the interwebz...

There were many sad faces when Channel M Music went down the pan last year, so Sam Alder and Toby Potter’s Manchester Scenewipe has arrived at the ideal time. The site’s premise is to capture exclusive and unusual performances from both local and touring acts; what started out as fun has gathered enough pace to feature unique appearances from the likes of The Twilight Sad, Frightened Rabbit, Laura Veirs and Why?. The local community meanwhile is represented strongly, with Airship, Deaf To Van Gogh’s Ear, Jo Rose and more all appearing. Sam and Toby next plan to shoot a special for Salford’s upcoming Sounds From The Other City festival (of which you can read more on further down.)

It’s unfair to class High Voltage as merely a website. Started initially as a live concern by Richard Cheetham, the moniker has put out records and has just printed issue 35 of its fanzine; its website however has been revitalised since February’s re-launch. Featuring features, reviews and local event and music recommendations from a core of enthusiastic writers, the site also acts as a centre point for High Voltage’s continuing promotions- most notably Holy Fuck’s Deaf Institute show on May 18th. They recently celebrated their 7th birthday at Islington Mill, with Everything Everything and Nine Black Alps turning out, so it’s safe to say that Richard and co. are proving as valuable as ever.

Again, Mind On Fire Collective are larger than just a website. Since their beginnings in 2004 the collective has never seemed to follow any one creator; instead they’re an increasingly broad group of musicians, DJs, producers, poets and others who share club nights, gigs and collaborations. The key aim is to show pride in the city’s more experimental and forward thinking artists, those who might otherwise fly under the radar. Recent events under the MOFC name include This City Is Ours’ Mount Kimbie show at Islington Mill, whilst others under their name range from local doom stalwarts Gnod to jazz conglomerate/promoters Riot Jazz.

We’re DROWNED (never gets old) in festivals this May, to the point where I’ve had to whittle it down to the best of them and distil each into a Spotify playlist; pretty decent of me no?

MAPS Festival: 30th April-3rd May
Now in its third year, MAPS takes place around 16 venues in the city’s Northern Quarter, mixing some out of towners (this year including Tubelord and My Luminaries), with an array of local talent which, as is becoming the norm, features some brilliant alt-folk in the form of Samson & Delilah and Jo Rose, as well as bi-polar math-rockers With That Knife. Beyond music there’s spoken word, arts and crafts and photography as MAPS draws in the local creatives to create a truly communal atmosphere. Four-day passes are £20; individual gigs are £5 adv.

Sounds From The Other City: 2nd May
On May 2nd Salford reminds everyone that it’s just as important to our locale’s live scene as its bigger brother. A slew of promoters descend on nine venues, and whilst Bring On The Dancing Horses will inevitably attract crowds at The Old Pint Pot, with a line-up featuring Fujiya & Miyagi as well as current local upstarts Egyptian Hip-Hop and May68, there’s plenty of interesting things happening elsewhere, not least the sumptuous downbeat of Kelpe and the kaleidoscope sounds of Sirconical; the mighty Chrome Hoof, meanwhile, headline Islington Mill. Tickets are £15.

Sounds From The Other City Playlist

FutureEverything: 12th - 15th May
FutureEverything (formerly Futuresonic) stands miles apart from anything else in May. A yearly conference bringing together innovative thinkers in the fields of music, arts and technology, it’s fair to say I’m a bit out of my depth when mentioning this one, but let’s try. Ryoji Ikeda opens the event with a live performance of his conceptual sound piece ‘Test Patterns’; he’s joined by Finnish avant-garde minimalist Mike Vainio. Other highlights include Konono No1’s African-cum-electronica rhythms on the 13th, whilst King Midas Sound bring their dub shimmer to Sound Control in support of Omar Souleyman. The comparatively straight-ahead Jesu close a beguiling line-up on the 15th. Full Festival passes are £135 pre-booked, £150 at full price and £75 for concessions; £5-14.50 individual shows.

Dot To Dot Festival: 31st May
The one everyone already knows about. Dot To Dot comes to Manchester for the first time, and what a line-up they’re bringing with them (can you tell I’m back in my comfort zone?), I might as well just list some names ey? Wild Beasts, Los Campesinos!, Liars, Mystery Jets, Beach House, Johnny Foreigner, Field Music, The Ruby Suns, Lonelady, Fionn Regan, and MORE…it’ll be good y’hear? It’s taking place in the Academy, the Deaf Insitute and Fac251. Tickets £25 plus booking fee.

Dried your eyes yet? What have I missed? Drop your comments and jags below, or get in touch with me on Twitter; @essjaycats, that’ll be me.