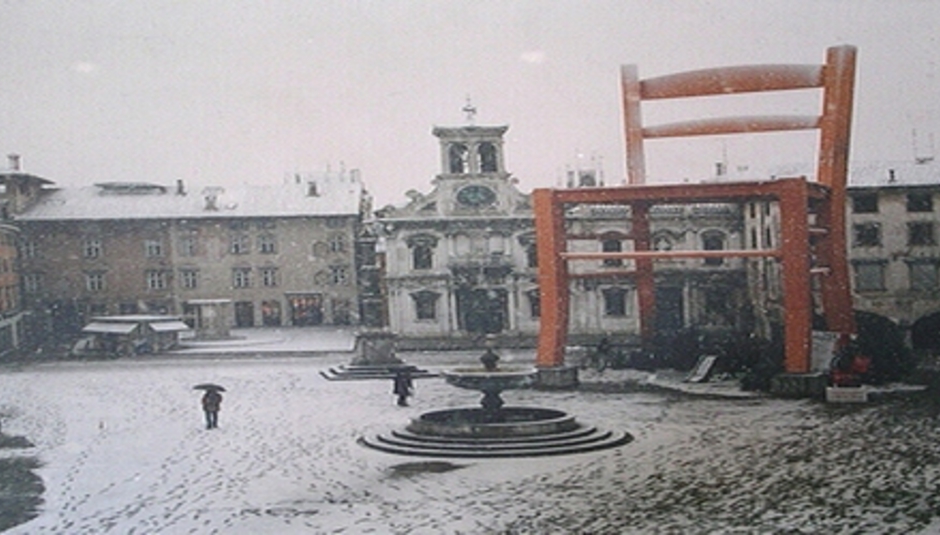 What’s the point of armchair dancefloor? Put plainly, it’s a monthly recommendation list of electronic music, be that something to whip off your top to while unleashing the full fury of your air horn (dancefloor), or things better experienced in calmer environments (armchair).

The aim is to compile a January to December list that, were someone to spend their hard-earned cash on, would leave them with a decent chunk of the year’s best electronic music. If I miss things I’ll try and include them further down the line (two albums featured below came out in November), while albums that are worth checking out without being deemed essential will feature in an 'also recommended' section.

Since September last year most editions of the column have been accompanied by an exclusive mix, and it literally vibrates me with unholy pleasure to unveil the next in line as none other than Klimek, aka Random Inc, Random Industries, Bizz Circuits, Autopoiesis and Sebastian Meissner (spot the Frankfurt-based producer’s real name from that lot if you dare). He’s released records on Mille Plateaux, Kompakt and Anticipate, and his three albums as Klimek, Music to Fall Asleep, Dedications and last year’s Movies is Magic, deserve shelf-space in any discerning electronic music lover’s collection.

“Freestyle is always my preferred genre” Sebastian said when I told him he could go anywhere he wanted with the mix, and that’s exactly where he went. Themed around British artists he's been influenced by, his It’s the U to the K set is the only mixtape I've ever heard that starts with Ragga Twins and Rum & Black-era hardcore and finish with Spacemen 3, Morrissey and Duran Duran. Along the way he takes in drum & bass, post-punk, C86 indie, shoegaze, dub-house, baggy and, a genre in their own right as always, The Fall. Enjoy.

Check out Klimek's own mixcloud page

At a time when drone has become a fashionable enough genre to throw up a seeming glut of average releases, it’s good to be reminded of just what an expressive and exciting form it can be. Whereas lesser work of this type can be of short-blooming appeal, repeated listening to Location Momentum continues to throw up new details: the gaseous ventings, wandering pressure fields and oscillator-generated cicada chirrup of ‘Circle One: Summer Transcience’, or the throat-grabbing impetus of ‘Linear to Circular/Vertical Axis’s reversed scything melody. As these moments of recognition accumulate you come to realise, most impressively of all, that this vast structure is thronging with vivid details.

If you’ve been wishing that The Knife’s Olof Björn Dreijer had been spending a little more time making superb, uncompromising techno under a pseudonym while living in Berlin then rejoice, because Dreijer is Oni Ayhun. I think. OAR004 recoils from the melodic, and significantly more straightforward, beauty of OAR003 in favour of more caustic and abstract zones. 'OAR004-A' is harsh, unrelenting techno, its sonar-like bleeps fighting for room with mini cloudbursts of white noise, derailed bass scales and ultra-compressed hi-hats. With its slow rising whines, sudden sharp drills of noise and alarming sub-bass gurgles, this is music for beleaguered bunkers.

Very different, but equally involving, the 13-plus minutes of ‘OAR004-B’ begin with sound like panting dogs (or perhaps wolves, given the artwork on Ayhun's previous release) being joined by a series of bells, creaks, and whistles. These disparate elements slowly fuse into a coherent rhythm, a bone-dry woodblock hit providing the only conventional percussion, while a trancelike two-note bassline thrums along. In this unfamiliar but absorbing landscape small moments, such as a brief, mournful whine of feedback or a subliminal sandy rattle take on an uncanny significance. If you have any interest in techno, this is work that demands exploration.

Detroit wunderkind Kyle Hall first popped up on his mentor Omar S's FXHE label, but started getting a lot more attention this side of the Atlantic when Hyperdub invited him in to remix Darkstar's 'Aidy's Girl's a Computer' last year (see ad012). Now he returns to the label to make his full debut. Hall's EP hovers, glinting, in a beatific space between Detroit techno, UK funky, leftfield dubstep and, in the case of 'You Know How I Feel', classic 2-step. Both tracks inspire and reward repeated listening, offering instant gratification and satisfying depth. 'Kaychunk's limber bassline trips down the scale, an android vocal clip repeatedly triggering amid a shower of needle-like hi-hats, while cloud-like Detroit pads roll past in the background.

The more reflective 'You Know How I Feel' operates on the same high level, gusting into view on softly exhaled pads, transfigured funk chords and an almost incidental 2-step. Just before it all becomes soporifically pleasant, though, a fidgety squeal stutters up through the mix that sits perpendicular to the rolling bassline, giving the tune a solid spine around which its more vaporous elements hang. The mixture of Hall's clear Detroit affinities with a pronounced UK bass music inflection creates a combination that, for the moment at least, puts him in a unique location on the map.

The impact of Kevin Drumm's extraordinary Imperial Horizon, released in November last year, is immediate, but to appreciate its full impact it's necessary to see it as the radiant counterpart to the somewhat bleaker beauty of its forerunner, 2008's Imperial Distortion. Whereas that album spread itself across two CDs and passed through some much cooler spaces, Imperial Horizon, comprising a single, 75-minute track entitled 'Just Lay Down and Forget It', is a sustained glide from semi-darkness into an almost blinding light.

The rippling crackle at the beginning of this long drone piece gives way to ripple and suck as the tone of the first quarter shifts. The overall effect is one of a glimmering radiance, with slowly shifting forms within it. Later, small cascades of notes can be picked out in the distance and bass elements appear and move off like grazing mammoths as the piece proceeds, finally, to an extraordinary zenith. A fantastic package this, as James Blake, FaltyDL and Instra:mental set to work on three tracks from Mount Kimbie's small but impressive back catalogue. Blake's mix of 'Maybes', which first surfaced on Hotflush boss Scuba's Substance mix, hangs faint, wavering blue notes behind a regurgitated vocoded vocal, muffled thuds, snapping handclaps, and a warm stream of mid-range melodic fuzz. It arrives at the same otherworldly joy as the original (reviewed all the way back in ad001 via a completely different path.

FaltyDL stays much closer to the original on his slightly faster version of 'Serged', adding a turbulent bumping bassline and rubbing gobbets of his trademark distended vocal snatches into the track's joints. But it's London's Instra:mental who produce what's probably this excellent disc's highlight, turning the galactic twitch of 'At Least' - from Mount Kimbie's second EP - into a subterranean, xylophone-led techno surge. They even make the original's dweeby 'are there any other effects on?' spoken word interruption one of their key elements, passing a remodulated, rippling version of it back and forth across the track.

I'm not sure which Tokyo suburb Chihei Hatakeyama calls home, but it must have been vibrating with drones over the past couple of years: The River, which was released in November, is just one of seven albums he's released in the last calendar year. As a Hatakeyama virgin I'm unable to say whether you could possibly need all those albums, but I'm happy to report that The River is a beautiful work. It's one of those albums whose impact unfolds in stages, finally enfolding you somewhere between the enveloping folds of 'Light Drizzle' the hazes of slide guitar on 'Gray Hued Sky' and the reverberant glimmer of closing track 'Phantasm'. And as the shift from the incandescent ascent of 'Twilight Gloom' into the more inimical surrounds of 'A House in the Fog' and 'Lance and Arrows' shows, The River doesn't flow through purely alluring terrain.

Owning original 1989 vinyl copies of the Virgo EPs that comprise this classic reissue (originally released in the same form by UK label Radical) carries a certain cachet, but let's face it: seminal Chicago house label Trax wasn't exactly Dubplates & Mastering when it came to delivering high quality wax. As a consequence it's accurate to say that, unless you were in the studio with Eric Lewis and Merwyn Sanders (not to be confused with the Marshall Jefferson/Adonis/Vince Lawrence Virgo, who were also on Trax) back in the day, you've never heard these outstanding tracks sounding as good as they do now.

'Take Me Higher' remains one of the ultimate house records, its restless groove always threatening to explode even as its euphoric payload arrives covertly, via a languidly fishtailing synth line. The acidic bubbling of 'In a Vision' is in the same league, a laser-lit track sweating house music's DNA. The phantom funk of 'Ride' completes a triad of faultless cuts, its darkly undulating bass marking out that dividing line between the sacred and the profane that all the best house music straddles.

Autechre's 10th album sees the duo, more mutable than many producers, sounding more like themselves than ever before. No bad thing in my book. listen

French dubstepper F delivers on the promise of last year's 12's with a debut LP of chrome-dipped floor-seeking machines locking into similar grooves as Martyn, 2562 and Peverelist. listen

Enticing bare bones from the abandoned second album of the since-disbanded Vex'd, including among the extras their phenomenal rework of Distance's 'Fallen'. listen

Chris Power tweets, and plays records as one half of British Males. Download their mixtapes here.