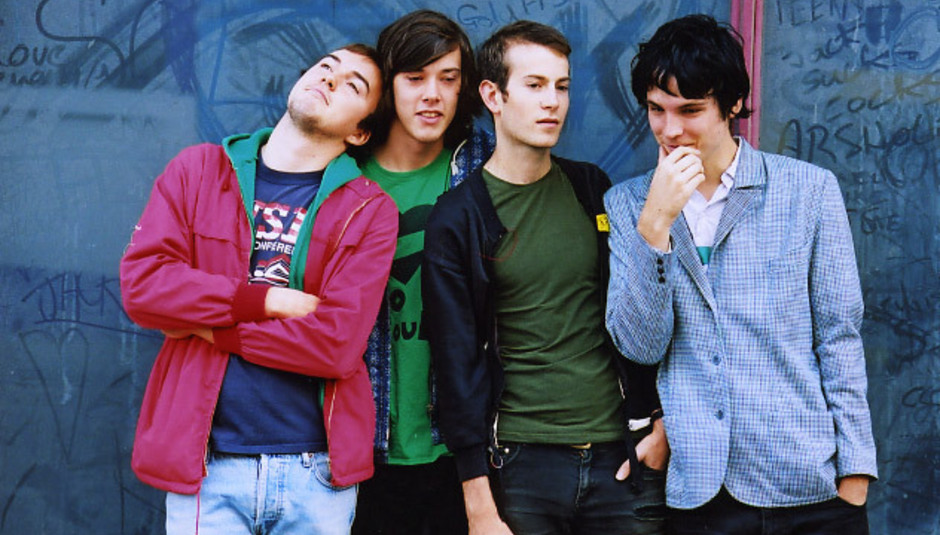 Rhys Jones from the band Good Shoes takes us through his tips for the coming year, including some video links for you all to gawp at. He's asked many of them to play his band's residency at Dalston's Stag's Head, and he's going to tell you just whyyyyyyy.

Over to Rhys, with a little help from his friends...

I'm not normally very on it with new bands but we recently played a tour with La Shark, Copy Haho and Wild Palms and was impressed by all, and I'm sitting with Tom and Steve so they're giving their input. Also there are some established acts whose albums I'm really excited about hearing. Pretty much everyone below is getting involved with our album launches that start today and go on till Sunday at the Stag's Head in Dalston! I Think 2010 should be a good year for all!

Probably the best new band round at the moment. They became good friends of ours on our last UK tour and their shows are amazing! Sam is one of the best frontmen I've seen in a long time - he's really captivating on stage and the whole band just look like the coolest bunch of people that have been onstage together ever! If they don't get massive over the next couple of years it confirms my thought that the music industry is run by idiots! Listen to 'Hotel Chevalier'! It's amazing!

Wild Palms toured the UK with us, too. Tom found out about them originally, and their music leans more to the darker side conpared to La Shark! Daryl plays some amazing guitar parts in their songs, he has a really unique style completly different to how Steve or I play in Good Shoes. Have a listen to 'Overtime' by them - it's a good place to start!

I've only heard one Is Tropical song, I've never seen them live either but the one song I heard was great - it was a b-side to their recent EP! I've known them for a while through those south London squat parties and through the Mystery Jets. I'm excited to hear more by them! Also they have a great name! I think the song is called 'Seasick Mutiny' but I can't be sure! Here's their latest video...

Is Tropical on MySpace

I know Fiction through Is Tropical, I saw them at the Buffalo Bar last month - they have some nice percussion and the singer seems pretty nifty on the keyboard, I don't know any of the song titles but the new stuff they played at the gig seemed most interesting! It was called 'Parakeets'!

Our soundguy got us into Everything Everything, he would play them all the time and there is one song called 'Suffragete Suffragette' that we all really liked. We sing it to each other a lot, one of the lyrics sounds like the singer is saying "Who's gonna sit on your face when I'm gone" so we just sing that to each other like idiots. I wonder what the actual lyric is, I hope those are the words [I think they are! - Ed]. Anyway that song is great!

One of my favourite bands and they are DJing at our Friday gig! Blaine lives down the road from me and keeps promising me a listen of the new album once it's mastered! Their second album was so good that this one is bound to be equally amazing and hopefully they'll get as big as they deserve! My favourite song by them is 'Metal Soul' - it was the Young Love b-side! It should have been a number one single!

I've liked Hatcham Social for a while we met them in Paris at a show we did together. I always like the song 'Crocodile' a lot but I guess everyone does! They're in the studio at the moment I dont know if it's for an EP or album but I want to hear it!

Finally The Maccabees! We started out at the same time as them but The Maccabees have become massive! Almost by themselves I guess, though recently NME and radio have started picking up on them, but before any of that they were already selling out Brixton Academy and massive venues across the UK! Hopefully they'll make another amazing record and become even bigger this year! Listen to 'Hearts That Strangle' - it's a great b-side!

The Maccabees on MySpace

Good Shoes release their album No Hope, No Future on January 25 and celebrate this with their 4 day album launch/residency at the Stag’s Head in Dalston. Several of the bands mentioned above are coming down to play – full line up as follows…

Good Shoes with Disappearers and Gold Sounds (evening only).

Good Shoes with Wild Palms and Othello Woolf (evening only).

Tickets are £5 for the evening shows and £3 for the matinees, on the door.