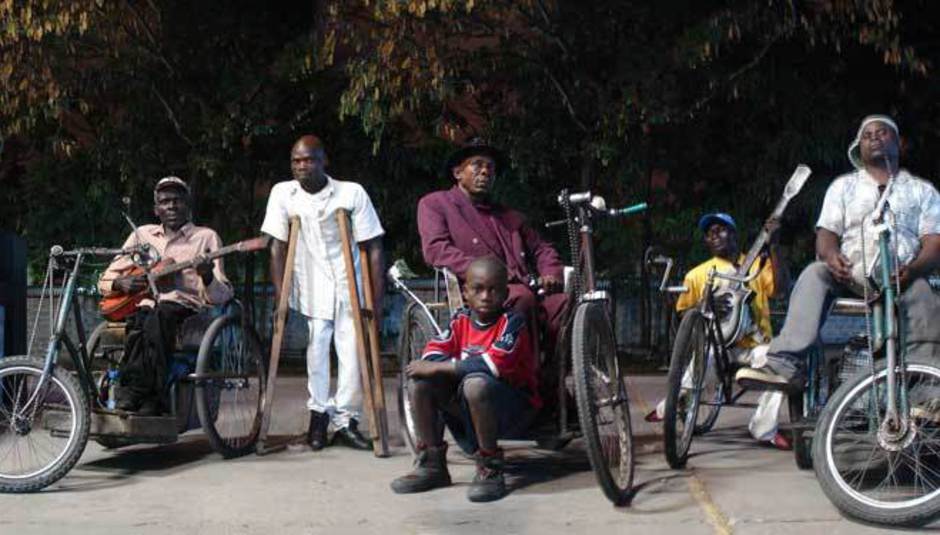 Kinshasa, the capital of the Democratic Republic of Congo, is a vast, sprawling city in a vast, sprawling country ten times the size of the UK. The Congolese like to refer to their home as the “richest country on Earth”, a reference to the lush rainforest and its wealth of natural resources. Sadly, those killjoys at the International Monetary Fund like to refer to it as the “118th richest country on Earth”, coming in just behind financial powerhouses Armenia and Afghanistan, and presumably a reference to the years of conflict and political instability that have gutted the national infrastructure and left many of those resources in the hands of a motley assortment of warlords.

This makes Kinshasa a hell of a place to live at the best of times, but for Staff Benda Bilili singers Ricky Likabu, Theo Nsituvuidi, Coco Ngambali, Kabose Kaamba and Djunana Tanga there was also the complication of growing up with polio in a country with over 9,000 humans to every qualified doctor (the UK has 440). The core of the band bonded over their shared experience of disability, and many of their lyrics are directly informed by it. One song translates as “Parents, please go to the vaccination centre / Get your babies vaccinated against polio.” Of course, it is not this social consciousness that drew fans to the Brighton Dome the night I met them, so I began by asking if they fear their songs have less of an impact for crowds who not only don’t understand the lyrics, but are also living lives a world away from the situation the songs were born in. Michel Winter, their manager and acting translator, sums up their answer: “They’re here so that people can enjoy it. They realise that European audiences like their music, so what the lyrics mean isn’t so important. The music is good and so is their attitude on stage and the energy they give. They’re just happy to be here.”

I’m meeting them at the start of their first ever full tour, 35 dates dotted around Europe, and the band are clearly on a high following what they describe as the “great success” of their debut British show at London’s Barbican the previous night. They say they’ve always known they’d play in Europe; such is the utter confidence they have in the music they’re making. I ask if it was a dream, but Michel replies with a Gallic shrug, “It was obvious for them.” The rather staid, sedate venues they’re playing is perhaps a reflection of the narrow box ‘world music’ is routinely filed away in, and their remarkable if sobering back-story probably leads some to assume that a Staff Benda Bilili gig will be a solemn affair. The reality is anything but. Later that night the good people of Brighton are dragged as one from the comfort of their chairs to find themselves dancing down the aisles and pressing up against the stage. They are being led by an irresistible rhythm and the example of the band, pirouetting in their wheelchairs. Djunana hops out of his on powerful arms and forward-rolls across the stage, the legs that polio has withered to stumps tucked beneath him. He is grinning wildly, and so, I realise, am I. Regardless of anything else, Staff Benda Bilili are a great party band.

They were inspired by one of the greats. Back in 1974, Congolese dictator Mobutu helped bring the now legendary ‘Rumble in the Jungle’ fight between Muhammad Ali and George Foreman to Kinshasa. The fight was preceded by ‘Zaire 74’, a three day festival immortalised in the documentary Soul Power and headlined by James Brown. Two of the band saw Brown’s performance, and the Godfather of Soul’s fingerprints are imprinted on their music and on their tireless quest to entertain. On ‘Je t’aime’ you can hear them call out “Sex Machine” in tribute. As for other influences, they mention reggae, the Cuban rumba and the vague catchall of ‘international music’. They are sketchy about specific artists, and Michel reveals that it is only recent touring that has introduced them properly to many musicians. “Other than James Brown, they don’t know many Western artists. They are just starting to discover now. For example, they didn’t know about Jimi Hendrix before they started touring, but now they see some similarities.”

Claiming musical kinship with Hendrix strikes me as a bold claim, but the band have their own musical innovator in the shape of Roger Landu. As a child Roger lived on the streets of Kinshasa, but he was taken in by the band after they came across him busking with an instrument he had invented himself: the satongé. You can make one yourself if you happen to have a powdered milk tin, an electrical wire and a bit of broken basket lying around. Simply jam the curved basket wood into the side of the tin and string the wire between the top of the tin and its new handle. Sounds simple, looks simpler, but by pressing the tin tight to his chest and squeezing the wooden handle in and out, Roger wrings virtuoso solos out of that single wire that could raze Electric Ladyland. The only drawback to his improvisation seems to be several occasions during the night when he is forced to repair or even entirely rebuild his instrument.

Not that the audience seems to mind, and neither do the band. For them, it’s a tiny hurdle after a journey that seems to have been mainly constructed of much larger obstacles. Their music, and their performance, now drips with the confidence of a band who feel they can do anything. Before I leave, Michel smiles at the apparent chaos backstage and confides that when he first heard of the band he was told “They are fantastic musicians, but they are disabled. Is that a problem?” His reply has proved true, “If the music is good, there won’t be a problem.”