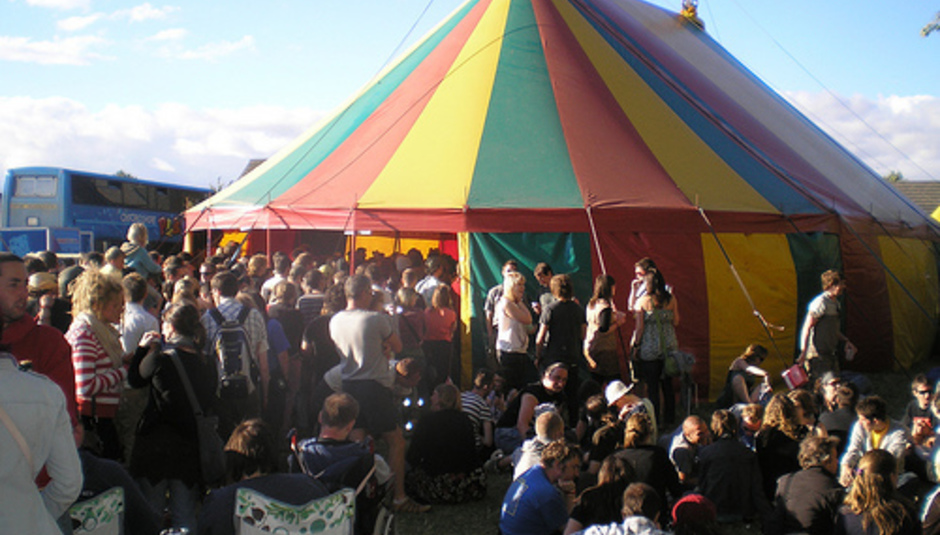 Truck Festival takes place this weekend (July 25th-26th) in a field in Steventon, near Oxford. We asked its founders to take over our DiScover column and tell us not only about the new bands on the bill, but also how they were chosen. They duly obliged.

Since Truck made it on to the map of festivals people want to play at, each year we have been deluged with demos. We sometimes manage to listen through them - indeed, Get Cape. Wear Cape. Fly! made it through the demo jury one year and opened the main stage, selected ahead of Test Icicles, no less. Still, most demos don't get listened to, and it seemed like a big waste of paper and plastic for people to be sending them in. I remembered the SonicBids website, through which my band had applied to SXSW, and thought it could be useful. I was also aware that there was a risk of us only booking our friends each year (we do, of course - that's one of the reasons we do a festival!) to the exclusion of new artists. This year we guaranteed 12 slots to artists who applied via this process. The result was that we listened to more new music than we had for years, with over 400 applicants for the 12 slots, and discovered some new favourites in the process. My brother Chris was given the task of making notes about each one...

How the hell did we cut down that many artists to 14? It’s half-past twelve at night, I’m in the middle of my university finals, I have an exam in two days! What am I doing making a phone call to my brother, who then puts me on speaker-phone so my other brother (who’s on Skype) can hear what I’m saying, and I can hear what he’s saying? It’s like a conference-call, but everything’s inaudible. Are we going to pick Nedry? They say they played at Truck last year as part of the Crossword Records showcase. None of us saw them, but they sound like they’d fit in there, and they have a nice picture. That’s the strange thing about this website, the unexpected importance of the peripherals.

You can really spot the bands that have signed up to the site just so they can apply to play at Truck. Their Electronic Press-Kits (EPKs) feel distinctly more personal than the ersatz friendliness of the mass-application country rock bands from Arkansas, who probably couldn’t play anyway. For the most part, though, it got to the point where I would have been really happy to have any of the last 50 or so bands at the festival. The standard was that high.

Getting the numbers down to 50 was hard enough, but the ones remaining were all really good. After that, the rationale for choosing one band over another became almost arbitrary. Of the fourteen bands chosen, a couple can’t make it: Flowers Of Hell, and Polk Madre. Flowers Of Hell make great marble sculptures of anaesthetised Spacemen 3-shaded pieces, an orchestra-sized band centred around Greg Jarvis, a synaesthetic who can compose music that sounds uncannily like sunrise. Unfortunately, he also lives in Toronto. Polka Madre would have been great fun: a Mexican Klezmer-punk outfit that would’ve run the risk of upstaging the rest of the festival by just being too darned fun, so it’s probably for the best that they’ll be finishing a tour of Finland on the 25th. This alphabetically-ordered lot CAN play, though:

If there were an award for the most-listened-to song from the SonicBids bands, 'Go! Canada' would certainly have won it, just by being the most addictive Ukelele-led piece of summery pop (what else?) written about a member of your band quitting the day before travelling to a music industry conference. I for one will definitely be watching them play.

Listen to 6 Day Riot on MySpace

Their Hearts Were Full Of Spring (Truck, 12pm Saturday)

For a band named after a song the Beach Boys covered that was schmaltzy even by their standards, THWFOS (perhaps inevitably) don’t share the over-arching naivety of the Wilsons before the fall of the endless Summer, but as their songs glide from one piece of lush melancholy to the next, and they can be just as sweetly melodic. Check out their dismantling of Winterlong as a lullaby on myspace so you can see why we chose them.

Listen to Their Hearts Were Full Of Spring on MySpace

One of the local bands that got through the process, Cat Matador absorb all our favourite indie bands and chew them up into their own thing.

Listen to Cat Matador on MySpace

Local lads doing pretty good, Dial F For Frankenstein have been bubbling up in the Oxford music scene of late, and a set at the Oxford gigathon The Punt went down so well that they got an encore. They’ll be a great band for kicking off the barn on Saturday.

Listen to Dial F For Frankenstein on MySpace

Without a doubt the most oddball of the bunch, Luke ‘Disasteradio’ Rowell is reportedly something of an underground legend in New Zealand, but the bewilderingly addictive 8-bit electro-pop (with a strong emphasis on the pop) of songs like ‘Awesome Feelings’ deserves international recognition. Insanely fun electronica always does seem to go down better on Sunday than Saturday; Disasteradio don’t look like breaking that trend.

Listen to Disasteradio on MySpace

Another Oxford band that have only started out relatively, but in truth the musical history of each member (Mark Wilden seems to have been in bands forever) shows in the tightness of their sound, sometimes Motorik, other times reaching for Explosions in the Sky-esque crescendos,.

Listen to From Light To Sound on MySpace

Joe Allen and Angharad Jenkins met while studying music at Oxford Brookes university, have now been making music for the best part of two years now, and have gradually been getting more and more people’s attention – and deservedly so – to the point if being front-cover stars of this month’s Nightshift and playing a gig at the Holywell Music Room. This weekend they’ll be playing in the slightly more down-to-earth environs of the ‘Village Pub’, but you can expect hushed silence nonetheless!

Mañana's sound is far from a scratchy demo, being produced by Ken Thomas (Sigur Ros, Coldplay). They've even supported the aforementioned Icelanders on tour and share their expansiveness. Even more notably, they are from Switzerland, hardly renowned for rock 'n' roll. This could be what the Alps would sound like if they were music.

Listen to Mañana on MySpace

I missed seeing them on their last UK tour with And So I Watch You From Afar, but briefly considered putting on a gig in Manchester just so I could see them live. The inevitable Mogwai comparisons (this is p*-rock, after all) don’t do them justice, as they have a concision that sets them apart from their peers, and are all the more awesome for it.

Listen to Maybeshewill on MySpace

Second-time round at Truck for Nedry (last year they were called Thugz), everyone kinda thought that these guys were the perfect glitchy type of act to play in the beat-hive on a Sunday. Taking influences from the more esoteric end of electronica from Battles to The Knife, and filtering it through the murk of dubstep, they were one of the first acts to really stand out from the crowd and I'm really looking forward to (hopefully) seeing them.

Listen to Nedry on MySpace

I was blown away by their explosive energy at a recent Pulled Apart By Horses show, and Talons are certainly ones to get you out of your tent early Sunday morning. Clearly demonstrating the complexities of their math rock counterparts, Talons are rapidly filling the void that Aereogramme left behind.

Listen to Talons on MySpace

Pet project of erstwhile member of Emmy The Great’s band Euan Hinshelwood, Younghusband makes it clear that his formative years were the mid-90s. Rather than the "British Pop" sound, though, The Olivia Tremor Control, Pavement and Grandaddy feel like the real roots here, like generation-X slacker rock that woke up at the end of the wrong decade.

Listen to Younghusband on MySpace