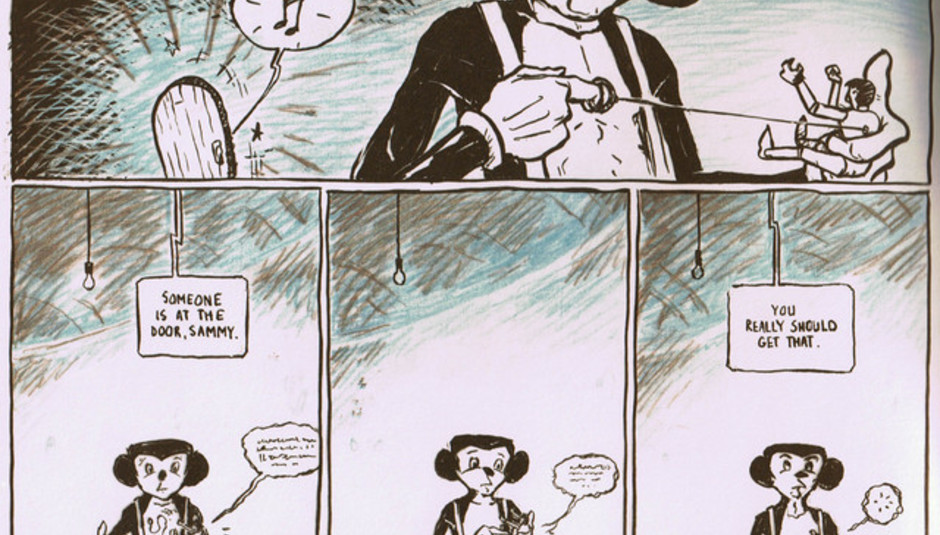 This week I have been clearing out my parents’ house, involving days of shoebox rifling and the finding of various teen-pash accoutrements - not least a gigantic wall poster of Jan Michael Vincent (sigh). All this looking back is neatly relevant though, as some bright spark is attempting to squeeze pennies out of those still not in possession of The Stone Roses back catalogue. AND we have a brand new band who wish to resurrect Baggy. Dust off your Kickers, everyone. While this appears to have been kicking about for a week or so, not all our favourite record establishments have received copies, so to all intents and whatsits it is out today. With that caveat dispatched, I will tell you that Django Django are very, very much worth getting your knickers in a twist about, having the sort of crudely generous approach to melody which will keep any shambling-wonk-folk fan happy. Indeed, ‘Storm’ comes over very much like a shuffly version of ‘Your Protector’, albeit one with a great big Monkees grin on its face, recorded in a 60s psychedelic’s garage and on the rubbishest Betas-borrowed drum kit imaginable. All this should mean that anyone bored rigid by the arch calculations of today’s angular bands will find this plumptious with charm. I am one of those sorts, and I think it’s divine.

UK release for this Garden State-hailing, shimmeringly lovely daub of lo-fi alt-pop. This is simple, unassuming and a pretty fantastic accompaniment to the fading Summer. Go and have a swizz at their MySpace, here though, because it seems all their songs are at least as brilliant as 'Fake Blues', not least the gorgeous 'Beach Comber'. Live 'thing' below.

'I could park a juggernaut in your mouth / And I can feel a hurricane when you shout'. You know, rarely has something so nasty sounded so wondrous and it really doesn’t get any better than this, kids. Hardly ever. Once a decade, maybe. And like an aligning of the indie spheres, this is also a gift for record-reviewers considering what we’re about to listen to.

I would like to argue that every bright young thing deserves the opportunity to love a nearly before they alight upon an exact. And though there are already far too many rules applied to musical appreciation – many of which are fun-free in the extreme - it makes sense to examine one in the light of Ruling Class. Because they sound like a band who were about as perfect as can be. And because despite all that, there will be young folk who get proper giddy about them. Now, let’s be clear, I don’t wish to obstruct anyone’s enjoyment of anything; to have a new favourite band is a special, special thing. But to listen to Ruling Class without mentioning The Stone Roses would be wrong. And it’s not like it hasn’t happened to me. I spent a perfect little shit of a year listening to The Black Crowes’ Southern Harmony & Musical Companion, going so far as to change my actual handwriting to match that of the sleeve notes (which still has some of the curlicues in place today. I WAS YOUNG, OKAY?). Luckily a kindly relative stepped in before it all went completely T’s up, and lent me some Faces albums. And then when Primal Scream released ‘Rocks’, I took up the baton, proferring copies of Exile On Main Street to anyone willing to suffer a lecture. I think it happens to all of us, once in a while. Anyway now that Baggy is back, I want to say; this is a lovely single, they look marvellous (I am happy to see the hirsute eff-you of the bowl cut return, I love its oddly aggressive femininity) and Ruling Class do sound pretty good. But to listen to them is to inhabit a bubble.

Oooo, loads out of ten, what an absolute pleasure this is. I even love Rob Jones very silly moniker; I should sign him up as my personal pop Jeeves in a heartbeat. ‘Tabasco Sole’ is delightful in a way which will be entirely familiar to those who enjoyed Jim Noir’s brief twinkle in the spotlight, it employs the sharply metallic tang those Beatles used to great effect on ‘Getting Better’ and it really does sweep you off somewhere enticingly tongue—in-cheek. Somewhere ‘Chuck Berry records all sound the same' and scenesters are instructed to 'Wear a De La Soul t-shirt once in a while / To make you feel hipper than you are'. Immensely appealing, cheap-as-chips videothing, too.

Extremely dreamy traditional British folk (the Magnet or Pentangle spooky sort) and doomy, deep-south blues make ‘Frozen Heart EP’ a particularly pleasurable distraction while I decide if it is irritating to point out that new bands sound like old ones. The title track in particular is deliciously dark, reminding me of things what sound pretty but are in fact tragic (c.f. Bobbie Gentry’s gorgeous ‘Ode To Billie Jo’). But please, please do try to listen to this with your eyes closed, for there are – and I mean Smoke Fairies no ill – some absolutely shocking amateur theatrics in their video. Honestly, it is godawful and I am immediately reminded of The Crucible as murdered by local dramatic berks what I saw when I was thirteen. As all of them Leg of Hammed their way through fluffed lines and horrorshow accents, I sat and sniggered into my photocopied programme, while grotesque stage make-up dripped down their faces. Or perhaps it was tears. Anyway, consider yourself warned.

Peter and Jof would have you believe that ‘There’s not a lot of things you can do with lemons except make lemonade’. Wrong! For one thing, as I have been instructed by a friend what is a whizz in the kitchen, lemons are essential for providing sourness, and that is one of the five essential tastes. (Keen cuisine-ists will want to know the others and I am happy to oblige – you want sweet, bitter, salt and umami. Hurrah, I have used umami in a review of an indie-pop record). And also, Boys Least Likely To Have Studied At Leith’s, lemons are good for putting on cuts when you want to re-imagine the excruciating pain I have experienced upon listening to your single. Oh, what larks, everyone, I do not mean it really. The thing is, WLGMLIML (<<<<< I mean, honestly) is so determinedly cute I do sort of want to hobble myself. Welcome to the world of ‘kindie’ everyone, where love affairs involve nothing more torrid than holding hands. What a deeply asexual record.

This is kind of preposterous, is it not?

I was quite rude about them earlier this year, which was mean, and upon listening to this I feel quite bad about lazy comparisons with fellow old-blokes, Elbow. Sorry Doves, that was almost as silly as all this FloMoLaRooVVBoots:Whoisthebest? business, and ‘Winter Hill’ is entirely not awful. While this is neither entry-level Buraka nor one of my top favourites from Blood Diamond, ‘IC19’ does demonstrate they are chaps who do not bother faffing about with boring concepts like compromise. There’s also a wicked-good new mixtape available in exchange for your email address, here.

Very promising despite the sledgehammer of a sample. I know, let’s compare her to FloMoLaRooVVBoots!

The Fiery Furnaces - ‘The End Is Near’ (Thrill Jockey)