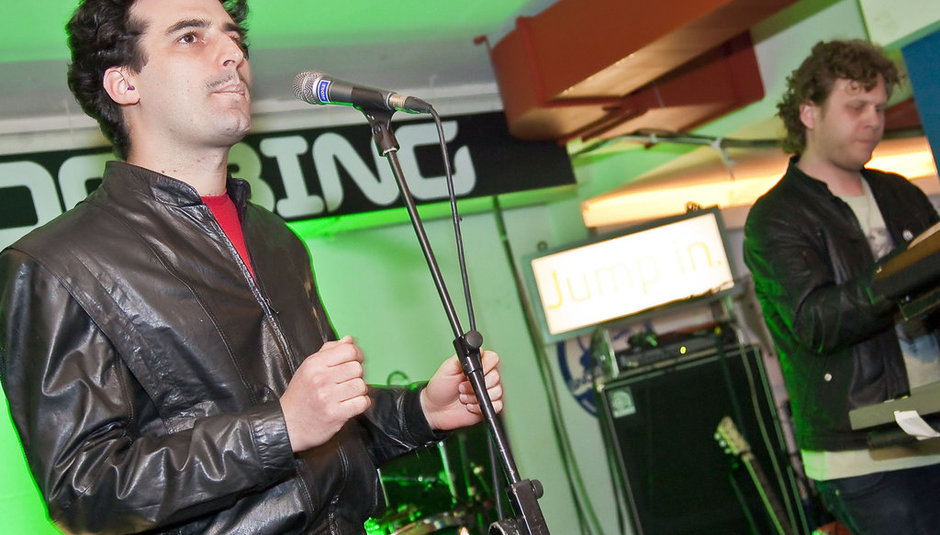 Summit up: Snowbombing 2009 - The DiS Review

Summit up: Snowbombing 2009 - The DiS Review

Snowbombing 2009 took place in Mayrhofen, Austria, between March 29th and to April 4th. Chris Beanland went along to check it out for DiS...

Imagine standing in a giant subterranean tennis court complex surrounded by 3000 sports science students from Manchester Metropolitan University, 25 journalists, and a few bemused Austrians who’ve tried to make sense of it all by taking their shirts off.

One of Europe’s weirdest music festivals is also one of its wildest; we may be halfway up the Alps in a sleepy village, but Snowbombing feels more like Ibiza on ice.

This annual carnival of carnage involves kids getting out of their minds by night, then injuring themselves on the Austrian slopes by day in the last of the winter’s snow. And you can say what you want about the aesthetics of the venues and the people - and indeed the rather random array of music on offer - but for fun alone, Snowbombing scores full marks.

Celebrating a decade since its inception, this thoroughly British undertaking has morphed into a debauched version of what US college students get up to on their relatively tame ’spring break’. Rather than going loco in Acapulco, the kids here party in forests, up mountains in clubs made of ice and in tacky apres-ski bars whose wood-panelled walls drip with sweat.

Dubstep continues to dominate dance floors dance floors in Britain, hence N Type and Hatcha get their glitches out for the lads and ladesses here, provoking delirium in some and a simple inability to master the slower moves required of dubstep dancing in others.

Electro remains the sound of the indie disco dance floor and 2ManyDJs fill up the al fresco forest stage as a last minute fill-in for Fatboy Slim, who cites ’health issues’ as the reason for pulling out of the festival late doors. Considering the amount of Jagerbombers and Zillertal beers the festivalgoers are getting through, it’s probably wise that he avoided Mayrhofen this weekend. New boys Cassette Jam make a convincing case to inherit to the Dewaele brothers’ throne with their own set of wonky electro. Alex Metric pulls a similar trick - he’s like Calvin Harris but much, much less of an arsehole.

Australia’s Bang Gang DJs probably do this schtick best though - plus they get to DJ at the Schlussel, an impossibly typecast Austrian club clad in timber that would, at any other time of the winter, echo to the “rah rah rah-ing” of your more typically toff-like winter sports fan.

Lindstrom (the Norwegian remixer of LCD Soundsystem and friend of Prins Thomas) provides a wonkier soundtrack to the weekend. His beats are more celebral and leftfield, but he doesn’t drop any clangers - unlike old hands Soul of Man and Krafty Kuts, who seem to be not really that bothered any more.

And as for Grandmaster Flash, well, he may be a legend but his set in the gargantuan temporary tennis court venue is so achingly predictable and jammed with technical errors that we wonder if he takes any pride in paying his mortgage at all now.

In the midst of the contents of dozens of iPods being played out through various enormous sound systems we worry that live music might be taking a back seat this year. Reports from punters on the ground suggest Ladyhawke, Biffy Clyro and The View received a muted reception earlier in the week.

And when we watch The Noisettes we’re left wondering how this flash-in-a-pan band seemed to have resurrected their career in the face of such crushing ambivalence from all and sundry.

But then we see Heartbreak and remember what it’s like to be unable to accurately ascertain whether a band you’re reviewing are the greatest thing ever - or the very, very worst. With their Robert Palmer vocals, disgusting Vice Magazine fashion sense and air of being a couple of prize plonkers on stage, we’re tempted to throw beer bottles at them. But on the other hand this duo proffer some of the catchiest tunes and guiltiest singalong moments of the whole weekend. So for now, at least, the jury is out.