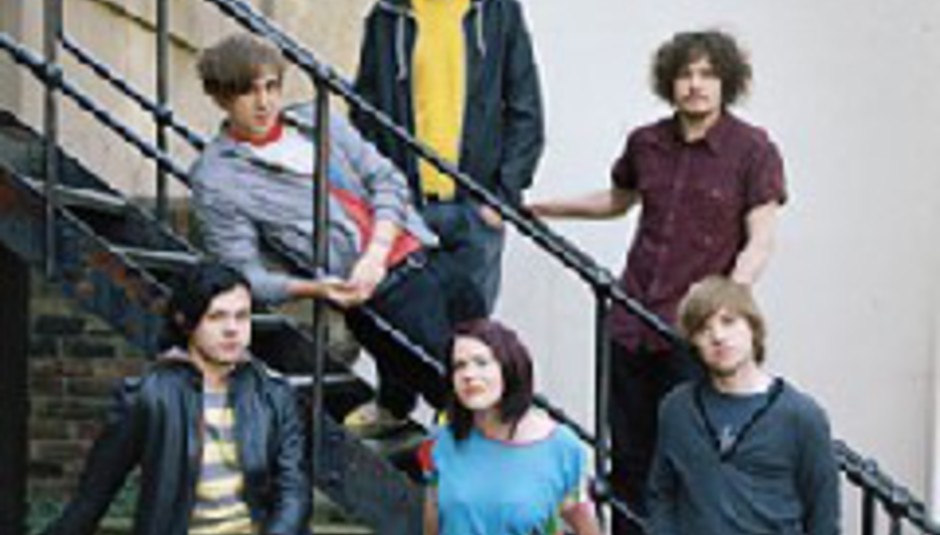 With the radar having been pointed north of the border for some time, and flashing bright red with alarming regularity in recent months, one band who seem to have slipped by almost unnoticed are Glasgow-based six-piece Make Model.

DiS caught up with the band ahead of some epic touring with the likes of New Young Pony Club, The Twilight Sad and Blood Red Shoes for a mushroom burger and a pint or two at Nottingham's Rescue Rooms.

You're on the road for pretty much the first quarter of 2008. Busy times ahead?
Lewis: Yeah, our focus is always on playing live. We're gonna finish mixing the album with Rich Costey (whose credits include Franz Ferdinand) at the end of February for a week, and then we're off to South By Southwest. Then, when we come back, we'll be doing another tour for the next single. I don't see us saying goodbye to the tour bus until mid-April at the earliest.

And what is the next single going to be?
Lewis: We're putting out 'The L.S.B.' again. Last time we did it as a limited run on our own label (The Biz), so now we're on EMI we want to give it a full-on, nationwide release. Again we've been working with Rich Costey on the single and his mix has brought the song on no end. There's a lot of belief around that song within the band and it's also one of our less poppy tracks, more of a statement of the band's roots if anything.

Do you see Make Model's sound developing in a more diverse route in the future?
Lewis: Definitely. I think we're already hard to pin down in terms of where we are, genre-specifically anyway, and I think lyrically we aren't your average predictable band writing about the same mundane things every day.

Yeah, I'd agree with that. 'The L.S.B., for example, sounds quite upbeat and jolly, but underneath the lyrics seem to say something else entirely.
Lewis: It is. It's about these kids that used to break into the houses on the close where I lived and they'd spray things on the wall like “The LSB”.

Which stands for?
Lewis: To be honest none of us really know but we've come to define it as “The Less Said (the) Better”, as it pretty much sums up the kind of people who talk it a lot harder than they actually walk it, if you know what I mean!

Going back to the album, have you got a release date planned?
Lewis: Originally it was scheduled for March, but the record label want us to hold it back a wee while longer, so we have to go along with that really. We're hoping for mid-summer now as we really want to get it out there.

Do you feel constrained by the label in some ways?
Lewis: Not so much constrained, more governed if you like. But the other side of the coin is that they're financing the record so we have to be patient. I mean, we've all been in bands before on indie labels with no money, so it's not as if we're one of those bands who've just appeared on a major from out of nowhere. Some of us have been involved in the music industry for a very long time, so we know how it works and, more importantly, the disadvantages and pitfalls of having no money and not being able to get your record out at all.

Financial aspects aside, what are the other main differences between being on a major as opposed to a small indie?
Lewis: Funnily enough, the fact that everything takes longer! You basically have a team of people whose job is to ensure you get recording time, get a tour together, get a soundman organised, transport, et cetera. I suppose it can make you lazy, particularly when we've all been used to doing it ourselves beforehand, but then because all of these different people are assigned one task each, it can also take longer to co-ordinate than if you were doing it for yourself too.

On the down side, though, I would imagine you're under more pressure to achieve sales targets and the like?
Lewis: Yeah that's true, but I do think that's the nature of the whole industry in general now. I think whatever level you're at as a band, you can't survive without an audience – they are ones who pretty much control your overall destiny.

It seems to be a pretty exciting time for Glasgow's music scene at the minute. What do you think has caused so much attention to be focused over the border just lately?
Ray: I think Glasgow has always been on the ball musically, for a number of years now. I think a lot of it has come via the underground, whether that’s emerging club nights and promoters, new festivals such as Connect, and obviously a dearth of new bands not just in Glasgow, but Scotland in general.
Lewis: I think one big difference about being in Glasgow is that because there isn't so much media and industry focus bands are able to develop at their own pace, so instead of being thrust into the limelight after one single or whatever, they're allowed to write and rehearse an album or so's worth of songs before anyone outside of their immediate circle has heard them.

It's interesting you mention Connect. The festival certainly gave a lot of exposure to new Scottish bands and was the first place I got to see Make Model play live.
Aimi: I think Connect was a good opening for us because it seemed to be a festival that appealed more to what I'd expect our audience to be into. I mean, T In The Park does the T-Break Stage for unsigned bands and stuff, but I don't think bands get the same levels of exposure Connect can give them.

You've been compared with the likes of Broken Social Scene, The Delgados and Arcade Fire. Do you think that being mentioned in the same breath as such established artists can heap pressure on a new band?
Lewis: We're quite honoured to be talked about in the same sentence as those bands, particularly Broken Social Scene, but at the same time we'd obviously like Make Model to be judged on its own merits. For example, although I think we're quite folksy in our outlook and the way we structure our songs, we also use a lot of beats and samples in there which I'd like to think makes us pretty unique for what we do.

Finally, are there any other bands out there you think we should be DiScovering that aren't necessarily getting the attention they deserve at this moment in time?
Ray: (pointing at his t-shirt) Copy Haho.
Lewis: A new band from Birmingham called Calories. It's basically a couple of ex-members of Distophia's new band. They're gonna be quite special.
Aimi: We're also going to try and keep our own label going and hopefully be able to start releasing records by smaller, unsigned bands in the near future. There isn't enough space within the industry to get everyone's discs out there, so small independent labels are the way forward in that sense.

The single 'The L.S.B.' is out on April 7 through EMI. For a free download of the track 'Alive-Alive-O' click HERE. For more information on Make Model visit their MySpace.