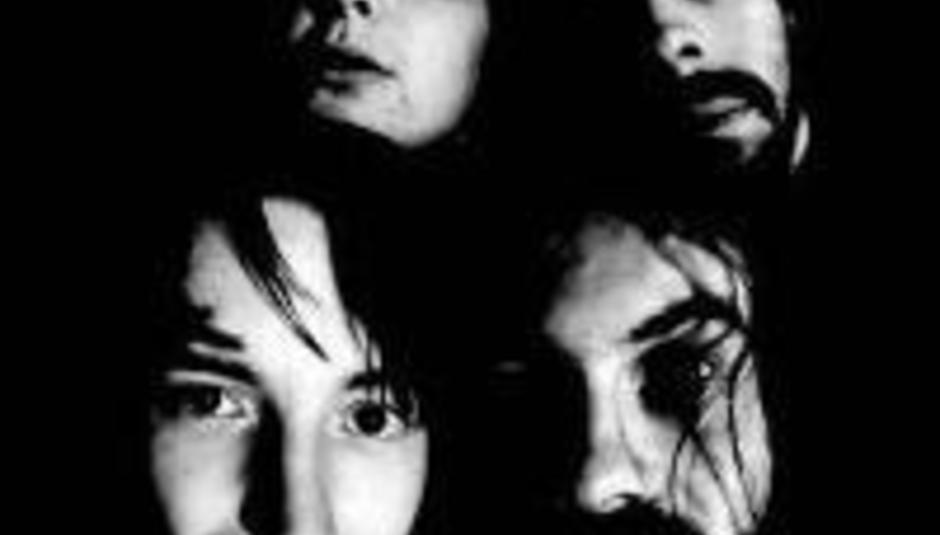 Regular readers of DiS will have noticed a name that keeps cropping up on these pages ever more frequently. Leicester four-piece Her Name Is Calla first came to our attention 18 months ago when their 'Hideous Box' demo landed on the doormat: essentially an acoustic-based intro with hallmarks of Turin Brakes if they'd taken a wrong turn and ended up in Venice. It was obvious back then that, given time, this band had the potential to be astonishingly unique, and their last two singles, 'Condor And River' and 'A Moment Of Clarity', both prove the point in almost groundbreaking fashion.

DiS caught up with the band - Tom Morris (vocals, piano, guitar), Michael Love (bass), Andy Coles (drums, electronics, trumpet), Thom Corah (electronics, trombone) - during their recent tour with iLiKETRAiNS and DiScovered that perfection comes at a cost and should never be taken for granted. Let the lesson begin...

Her Name Is Calla... why?
Michael: I don't know really... I'd just like to say we're a band that's the sum of its parts...
Tom: ...and that's why you're not the spokesperson! Me and Michael had been playing together for a number of years, and this is what we've been working towards. We'd been writing these songs, and then when we got Andy and Thom involved the whole purpose of Her Name Is Calla just found itself, really. Andy likes to think of himself as the glue.

The new songs certainly sound a world apart from those on that first demo way back at the start of 2006.
Tom: We had this ‘acoustic band’ tag and I don't know why, to be honest. I mean, those songs do sound stripped-down compared to the likes of 'Condor And River', but even then if you listen there's a lot of electronics going on as well.

There's a whole load of things going on now, though - even three different songs in one, in some cases.
Tom: I think this is the sound we always wanted to have, but without the addition of Thom - the final member to join the band - we were struggling to pull it off as a three-piece. The thing is, though, we've always approached songs by stripping them down to start with, to the point where they're as basic as possible. Then we just added layer upon layer afterwards. It's like with the song 'New England', where we just kept adding more drums until we had five different layers of the things in the end!

There's a wide range of sounds and influences in your music - it's hard to pinpoint any one particular reference. How did it all come about?
Tom: We've all played in bands before, and not necessarily indie-type ones either. Andy's played in a metal band, for example.
Thom: I think because we've all been in bands that just specialise in one particular genre, being in Her Name Is Calla has given us the freedom to try out new things and not stick to the rules. I see us as a ‘thinking band’ rather than your average indie rock group, to be honest.
Tom: We think through everything we do and how we're going to play it. Sometimes it might sound simple but then others it can get quite complex, and we're always open to new ideas, new interpretations. We do actually hold a lot of stuff back, and scrap lots of ideas.
Michael: I'd say that, on average, nine out of ten ideas get scrapped before we get out of the rehearsal room.
Tom: It's like with 'New England'. That was on the verge of being scrapped completely not so long back, and it was only when we totally rewrote the second half of the song by adding the drum parts that we decided to go with it again.
Andy: That was literally four or five days before the iLiKETRAiNS tour started!
Tom: It just took on a whole new life after that.

'Condor And River' has to be one of the most audacious pieces of music I've heard all year. What, or who, initiated it?
Tom: Again, it was something that we'd been playing around with for a hell of a long time.
Michael: Originally it was much longer than the 17-minute version on the single as well.

Who had the final editorial say?
Michael: We all did, to be honest. It got to the point where we all just thought it was getting ridiculous - it was over half-an-hour long at one point!
Tom: Most of our sets only tend to be 30 minutes, and we were on the verge of writing a 40-minute song!
Michael: We're toying with the idea of inventing a new medium to release music, as we're never going to fit ten songs onto an album!
Tom: Or release a ten-disc album!

Were you surprised that it turned out to be 'Condor...' that attracted national recognition for the band?
Michael: We weren't expecting anything like the response it got, put it that way.
Thom: Our ethos has always been to put out the song we like the most and hopefully people will eventually come to it.
Michael: We actually sold the very last copy on the Glasgow leg of the tour...
Tom: ...Literally two minutes into playing 'Condor And River' may I add.

How did it feel when you were invited on tour by iLiKETRAiNS?
Tom: It was such an honour as they really are such great people and an amazing band, too. We initially just got asked to do the Leicester date of the tour, but then they offered us more dates and we ended up doing most of the shows in the north and midlands. Plus Pete, their engineer, is producing our next single.

Your current single 'A Moment Of Clarity' also happens to be your first for Leeds-based experimental label Gizeh Records. Will you be working with the label on a long-term basis, or was this just a one-off?
Tom: At this moment in time it's hard to say. Rich (Knox) from the label approached us about doing a single and we liked most of the stuff they'd previously put out, so it seemed ideal to sign with them. We don't even know what our next release will be, as we'd really like to release a mini-album in the near future.

Will the singles be on the mini-album or will it be all new songs?
Tom: Bits of both really, although any previously released songs will be re-recorded, as there's bits of 'Condor And River', for instance, that when I listen back to them sound really awful now compared to how they do when we play it live.

Really?
Tom: We've got really high standards, almost an impossible desire to reach levels of perfection that possibly don't exist. If you don't at least try then you just end up accepting mediocrity.
Michael: That's why we tend to write so much stuff off. We're quite hard on each other and even harder on ourselves. We constantly strive to raise our game, raise each others’ games too.
Tom: At some point we'll probably burn out and die, but it will be worth it if we've made the perfect record in the meantime.

You've been described as a ‘sound-checker's nightmare’ with all the different pieces of equipment and electronic gadgets onstage.
Tom: Yeah, our soundchecks can be a bit excessive, although we don't tend to use more than one channel per instrument, so it's not actually as complicated as it first seems. Sometimes, though, there can be a lot of whirring and feedback, so that can be a problem.

The last time we spoke there was talk of re-locating the band up north, York being the most likely destination. Is this still the case?
Thom: Yes definitely. It just seems logical now that we're involved with Gizeh, who are based in Leeds, and the music scene there just seems more open-minded and accepting of bands such as this.
Michael: We get treated better up north than we do in Leicester, and we get better crowds as well.
Tom: In Leicester we've always struggled to pull a crowd to be honest. We've all got different reasons for moving up to York though, besides the band. My family are from there, so is my wife, and we've got a young baby so it makes sense to move there now.

Some of the band are playing as part of Damo Suzuki's Burning Hammer Band’s improvised set at next month's (November 10) Nottingham Drowned In Sound night. Are you looking forward to it?
Tom: Me and Thom are definitely doing it. It was weird how we got involved with that; I think we were having a conversation with you and Jordan Dowling at the Leicester DiS show in August and one of you said we should come down to it, and a week later we saw our name appearing on fliers and posters for the show! It's gonna be wicked though.

Her Name Is Calla - would she be happy?
Tom: Hmmm... we haven't decided whether Calla is a he or a she yet, to be honest!

'A Moment Of Clarity' is out now on Gizeh Records, and DiS has five limited edition 7-inch vinyl copies of the single to give away if you can answer this simple question:

How many minutes into 'Condor And River' were the band at the Glasgow date of the iLiKETRAiNS tour when the very last copy of the single was sold?

If you think you know the answer, e-mail pt@gizehrecords.com before November 10 for a chance of winning a copy.

For more information on Her Name Is Calla visit their MYSPACE.