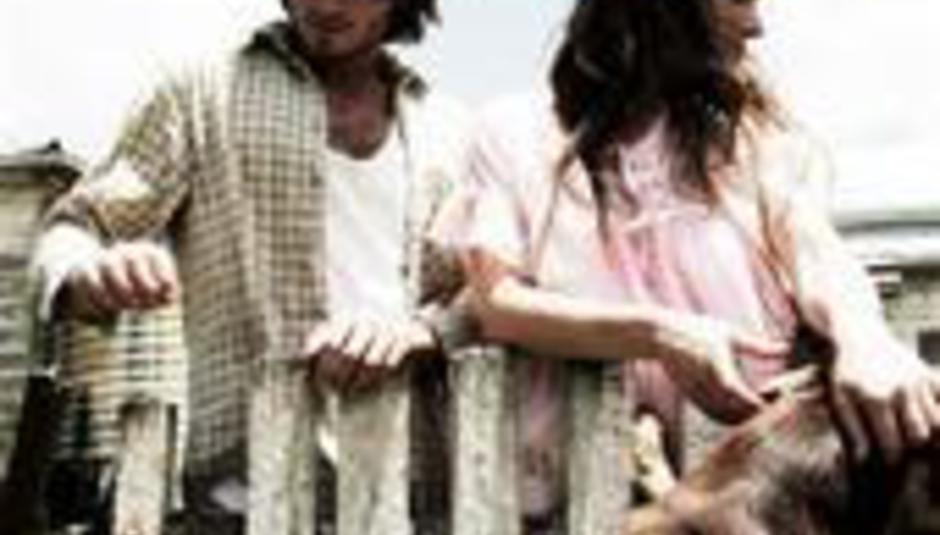 For Australian sibling duo Angus & Julia Stone, the last twelve months have been like something from a fairytale. Having initially started playing songs "for something to do", their individual styles of songwriting - for although they are a duo, they don't actually write or perform as such - have developed from the bedsit into the living rooms of thousands courtesy of last year's collection of demos, 'Chocolates And Cigarettes'.

Since then they have spent a considerable amount of time in the UK, both recording the follow-up EP 'Heart Full Of Wine' and wowing British audiences with their live shows. Currently on a short eight-date tour and with a couple of festival appearances booked at The Great Escape and Latitude, the family Stone look set to take their tear-stained melodies of emotional baggage and effervescent dreams to an even wider audience this summer.

DiS caught up with Julia at the end of a long, hard day. It may have been twelve noon here but it was way past ten o'clock in Sydney. Brother Angus, meanwhile, was out partying and making plans for a ‘60s and ‘70s retro party in honour of his 21st birthday in two days time (t’was Friday 27th April – belated returns!).

Tell me about how you got into making music...
We both started singing when we were little. Our mum and dad were in a folk duo, and they used to take us to camps and festivals, which is where we learned to harmonise. Dad was a music teacher at school, so as well as learning to sing, we also took up various musical instruments at school. I played the trumpet, Angus the trombone and our sister Katherine played the saxophone. As time went on we sort of moved on from that and I started playing more folk orientated stuff whereas Angus joined a Rage Against The Machine-style rock band. I bought a guitar around this time and Angus showed me how to play it. Mum and dad had split up by now and dad was playing in his own covers band, Backbeat, with his new partner (and later his wife). It was around this time that I started writing songs, and Angus had also got quite a few compositions of his own, so we started organising live sets together. It was quite funny at first, as people started calling us The Stones, and we'd make separate CDs to sell at our gigs - one with my songs on and one with Angus', so people sometimes had to choose which they liked the most. I suppose where we are at now kind of just progressed from there.

You are quite unique in that you don't write and perform together like most duos.
I guess so. We both write different to each other. My songs are more personal to me and about my life, whereas Angus writes about the world in general more.

Do you think you'll collaborate more in the future?
I think we're still getting to know each other as people, which probably sounds strange given that we're brother and sister, but that's how I see it. I don't want to say that writing a song together will never happen, but I just think it is highly unlikely. The only time we've written anything together was a song we did as a present for our dad and his new wife at their wedding, and that was more a spontaneous thing that just happened rather than any planned gesture.

Are you both competitive towards one another as far as the songs go?
I don't think so. We're both still learning as far as songwriting and performing live go. At the moment I still don't think I'm very good at playing live, so I find it more important concentrating on overcoming my own fears rather than worrying about whether I'm better than Angus.

You seem to be establishing yourself quite rapidly in Britain. Do you find audiences over here more receptive than the ones back home?
A little bit. I think UK audiences are a lot more passionate about music, and certainly more respectful towards new artists. Maybe it's because we're crossing a broader range, I dunno… The thing about playing back home is that people's tastes tend to be far more mainstream, and unless they've heard something on the radio they tend not to make an effort to get to know any other songs. We often get people in Newport (the band's home town) that come just to hear the one song then leave straight after. I guess it's kinda weird, really...

Are you quite surprised at the reaction your music has received from both critics and music fans so far?
Yeah, definitely. We never expected everything to go so well, particularly where reviews are concerned. I don't think it's fair to expect anything to be honest, as once you fall into that trap everything afterwards becomes a disappointment.

You were also doing a spot of recording during your recent visit over here. How did that go?
It was really good, although the fact we spent six weeks without a day off did begin to take its toll towards the end. We spent our recording time between London and Australia. Back home was a bit mental actually, as we have a home studio in our mother's lounge, and her dingo tends to howl at the music, which can be a nightmare when you've just finished a take! We're busy choosing which songs we're going to put on our album now, which we hope to have finished very soon.

So when are you aiming to release the record?
I'd like to think everything will be finished within the next month, so if all goes to plan we should be putting it in the shops around August time.

Does the record have a title yet?
No, it doesn't yet. I guess we've neglected things like that in favour of making video clips, which we're particularly into at the minute. I think we're starting to realise that maybe our long-term careers could be in film-making as much as music. We've a song on the record called 'The Beast', which Angus wrote, and basically we've put together this awesome animated film taken from a book our grandmother used to read to go with it.

Are there any songs on the record which you are particularly satisfied with?
I think the record as a whole is really good, but my favourite song is one that hasn't made onto any of our records yet called 'I'm Not Yours'. I tried to record it at the start of the year but it just didn't seem to work. It's quite an emotional song and one which seems to connect with the audience when I play it live, yet for whatever reason I just fall apart with it in the studio. I'd like to think it will eventually see the light of day in the future, if not on a proper release then via our mailing list or something.

Are you looking forward to playing the Great Escape and Latitude Festivals this summer?
Yeah, definitely. I love going to festivals anyway, as they're just excuses to wander round and have fun and celebrate, particularly folk festivals. What I find interesting about the line-ups, particularly for Latitude, is the fact that there are so many diverse types of music. I mean, if it was just one kind of music throughout the whole festival it would drive me mental, so the fact you can walk around and see a rock band on one stage and a jazz artist on another and then visit the dance stage straight after. That's pretty awesome.

Are there any artists you're really looking forward to seeing?
I'll probably try and see as many as I can but I guess the most obvious ones that catch the eye are Damian Rice and Arcade Fire.

What are your long-term ambitions?
Hmmm... that's a tough one. I find trying to predict what is going to happen in the future quite confusing. I can't even tell you what we're going to be doing in a few days, other than recovering from Angus' birthday party no doubt! One thing we have started to do is take more of an interest in electronic music, and we're playing around with a lot of computerised beats at the minute. Who knows where we'll be? We can only but dream I suppose, and you know what they say - the sky's the limit...

Angus & Julia Stone release their new single 'Private Lawns' via Independiente on Monday 18th June. Prior to that you can catch them at the Great Escape Festival in Brighton on 17th May.

For more information visit their MYSPACE.