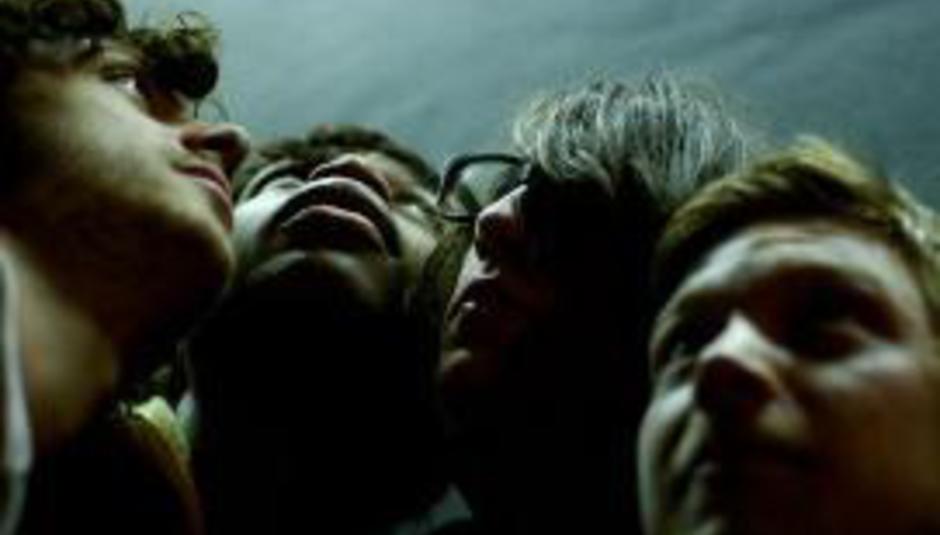 When Les Incompétents finally ground to a halt last month, no one could have expected three of their members to re-emerge so soon with such an inspiring collection of demos that have currently got A&R men falling off their chairs in anticiption and MySpace users gloating to their friends about next year's soon-to-be big thing.

Formed in the summer, Ox.Eagle.Lion.Man are still in single figures as far as live performances go (four, to be precise at the time of writing) but already the buzz is growing. With a glut of dates up and down the country announced for the first two months of 2007 (including a Nottingham DiS show in January), world domination must surely be at the top of their agenda. DiS spoke to frontman Fred MacPherson about the past and what the future hopefully holds for the aspiring four piece.

How long has Ox.Eagle.Lion.Man been in the making?
Since we announced the end of Les Incompétents, to be honest. Me and Shaun wanting to carry on writing and making music together regardless of the band, so at the back end of the summer we set about putting together a new set of songs that weren't really in the same vein as what Les Incompétents were doing. If anything, we see Ox.Eagle.Lion.Man as a continuation, the next stage of our development.

What about the other members of Les Incompétents?
Well Chris (Burman, guitars) was going back to university anyway, so would have found it difficult to put that much time and effort into making music full-time. He is already in the process of forming a new band with Billy (Leeson, vocals), who's managing a band at present as well. I guess Les Incompétents ran its course, and rather than just fade into obscurity we ended it with a bang.

How did you arrive at the name Ox.Eagle.Lion.Man?
We were at Shaun's house trying to come up with a name that would immediately stand out and then someone mentioned the apocalypse and the book of revelations and these four beings kept cropping up on every page.

So, if you were to label each member of the band as the Ox, the Eagle, the Lion, and the Man, who would be what?
Well, for starters, no one would want to be the man! I'd say Shaun would definitely be the lion because he's quite hairy, and Tommy would be the eagle. I think Tobi would have to be the man because he's so incredibly tall, which leaves me as the ox I guess!

How many songs have you written so far as Ox.Eagle.Lion.Man?
We still only have eight songs in total, of which we do seven live. We're in the process of writing a new one at present.

What would you say are the main differences between these songs and the stuff you were doing with Les Incompétents?
Well for a start we tend to play the songs a lot slower than we did with Les Incompetents. 'A Matter Of Skill And Timing' for example, off the first demo, is a carefully crafted pop song, rather than just six school friends banging a tune out badly in half an hour. I don't think many people realise just what a talented musician Shaun is. He could have gone to the Royal College of Music and he has qualifications up to teaching standard. I think with this band we tend to complement and rely on each other rather than other people.

Your song 'The Last Lifeboat' mentions the line "...waking up in hospital and I don't know what I've been missing, I don't know where I've been". Is this a reference to Billy being assaulted and the last days of Les Incompétents?
Yeah, definitely. I think when we wrote that we weren't sure whether to use it as the last Les Incompétents song or the first for the new band, but because of the structure and sound it didn't really fit in with what we were doing previously so it had to be an Ox.Eagle.Lion.Man song. I think we see this band as a new beginning, an opportunity to challenge ourselves, really.

So would you say this is more of a serious attempt at making it in the music business as opposed to your last band?
In some ways, yeah. I don't think I know enough yet to play in a serious band to be quite honest, but I see Ox.Eagle.Lion.Man as being a band that will appeal to people from all different age groups, and not just 14- to 18-year-olds. I mean, we've all got different influences that we bring to the mix, but I don't think that was so apparent with Les Incs. Because there were six of us in Les Incs a lot of the ideas got diluted, and while most of the songs were wholesome and fun, there wasn't much art to them.

Have you had any interest from prospective record labels since forming the band?
Yeah, it's quite bizarre, because believe it or not Les Incompétents received hardly any interest from A&R people. I think we were seen as some amateur, London scene band who wouldn't achieve anything outside of the city - I dunno - but that is one reason why we're aiming to play as many gigs outside of London with this band as early as possible. We've been talking to one or two labels about putting a single out later on this year, possibly around the summer time, but first we want to play as many shows as we can and hone our sound.

One of the things that dogged Les Incompétents throughout their short career were the accusations that the band were just posh boys from privileged backgrounds. Do you feel this may hamper Ox.Eagle.Lion.Man in any way?
I hope not. I mean, I'm proud of my educational background and where I come from. Why should I want to deny the life I've lived? I think saying anything other than where we're from would be creating a false image, and whether or not everyone can empathise with our backgrounds at least no one can question our integrity.

So what are Ox.Eagle.Lion.Man's main ambitions for 2007?
To get our sound exactly how we want it, rather than rush into things for the sake of it when it isn't ready, and to get signed, hopefully. I've seen so many good bands fall by the wayside that you do sometimes wonder if it's all worth it, to be honest. I mean, if we don't feel we've made any headway twelve months from now, and we're living on the breadline just to survive and make music, then I guess we would have to rethink what we're doing. I don't want to be one of those people in my fourteenth band by the age of 30, still having never got signed and playing the same pubs to the same people week-in, week-out. I think if Ox.Eagle.Lion.Man don't make an impact I would retire from making music. It's pointless continually flogging a dead horse if no one's paying any attention.

Ox.Eagle.Lion.Man play the following dates in 2007:

For more information on Ox.Eagle.Lion.Man click to their MySpace, HERE.