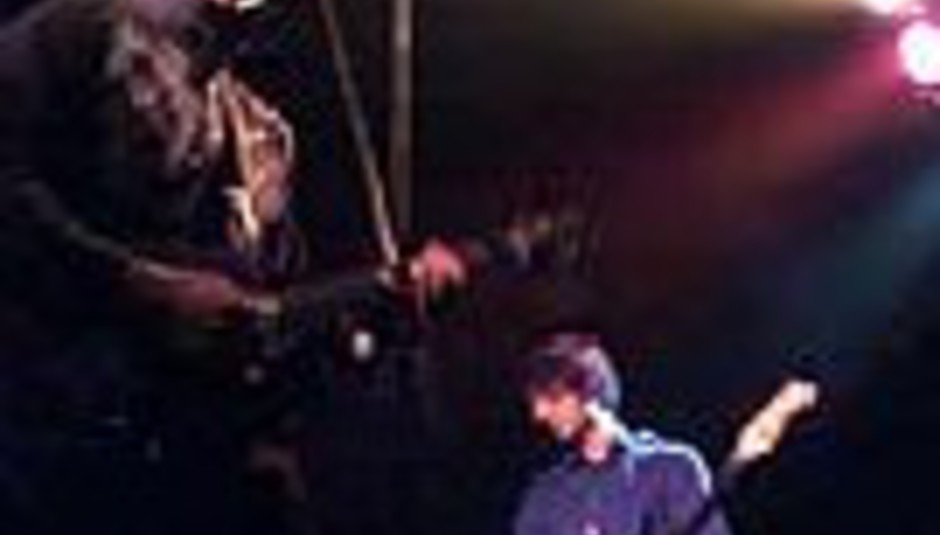 From Northampton To NYC And Back Again...

From Northampton To NYC And Back Again...

by Dom Gourlay October 5th, 2005
Hailing from New York via Northampton, the Five O’Clock Heroes write songs that sound like the best bits of your mum and dad’s record collection combined with the coolest kid at your college’s iPod playlist. This last year has seen them tour with the likes of The Bravery, The Ordinary Boys and The Paddingtons and this week they’re set to hook up with The Rakes and Louis XIV.

Comprising of Anthony Ellis (vocals/guitar), Patrick Fowler (drums) – the English half – and Elliot Thompson (lead guitar) and Nader Kheirbek (bass) flying the flag for the USA, the Five O’Clock Heroes look set to be one of next year’s big radio friendly unit shifters. Their last two singles (‘Run To Her’ and ‘Head Games’) both flirted with the lower end of the Top 50 and forthcoming single ‘White Girls’, out on 31st October on Glaze Records, looks set to go one better.

Seeing themselves more as a live band than recording artists, Anthony Ellis explains how their songs tend to develop - not in the traditional sense where each member sits round a table, pen and paper at the ready – instead using a method that can only be described as practising to make it perfect.

“With ‘Run To Her’, it was recorded quite early on when the band first started, and then 50 or so shows down the line, we realised just how much the song had changed from the original recording. It’s not that we’d changed direction or anything, more a case of us altering the way we play the song. In fact, I could probably say that about almost everything in our current live set, as we do tend to change our songs drastically over time.”

With the band seeing themselves as being more at home playing to people in a sweaty club, it’s no surprise that they’ve amassed a loyal following on both sides of the Atlantic. The band do admit however that, sometimes, this has made it more difficult for them to know what their audience wants, due to the varying fads and styles on each side of the pond.

“It’s really weird because a song like ‘Run To Her’ would go down a storm in the US but not so much over here because it’s slightly rockier, whereas ‘White Girls’ seems to have caught on at every show we’ve played in Britain because it’s got a more dance-y feel to it,” declares Anthony.

So what is it that makes their live show so different to their recorded output?

“To be honest, I don’t think we had the resources (in the studio) when we recorded everything to actually capture that energy we have live,” admits guitarist Elliot Thompson. “Everything was done very quickly and very cheaply. It was a case of us wanting to get something down on tape so we could get it sent out straight away…”

Still not settled down to one record label, the Five O’Clock Heroes are only too aware of the possibility of being bogged down by industry politics and marketing strategies, preferring instead to go with smaller labels that give them more freedom over the artwork and content of their releases.

“We’ve been sat with A&R people in the past and they’ve said it’s always best to release your best received live song as the first single and save your strongest song ‘til the third EP. Absolute rubbish if you ask me! We just want to put a song out when it feels right to us, not to coincide with some marketing portfolio,” says Anthony Ellis, despairingly.
“I think it’s sad when bands get dropped within a year because they’ve never been allowed to reach their full potential,” adds drummer Patrick Fowler.
“The character of a band is formed over a period of time. I mean, U2 didn’t even have a hit until their third record!” states Anthony.

Do you think there is a certain element of negativity breeding itself within the music industry that’s made bands like yourself more sceptical about who you can trust and which record labels care more about their artists than making a quick buck?

“Yeah definitely,” says Elliot. “I mean, when a label makes out they’re interested and they leave you waiting and waiting for a call that never comes, and you’ve built your hopes up and stopped doing the things that made them pay attention in the first instance, so in effect, you end up losing any real focus.”

As the most recent addition to the Five O’Clock Heroes, the story of Patrick Fowler’s recruitment – basically as a last minute replacement when their previous drummer couldn’t get a work permit on entering the UK for their first tour in this country – is the sort of fable rock’n’roll legends are borne out of.

“Basically, our manager found him in a pub somewhere in London and two hours later he was there rehearsing with us!” admits a startled Anthony Ellis. “Within six hours, he’d laid down nine songs and we all knew then we’d found someone special.”
“I had played drums before though…” adds Patrick, rather sheepishly.
“It was very smooth though, how it all worked out…” replies Anthony.
“It was for you – I was literally shitting myself!” reveals Patrick.

With the band’s sound moulded somewhere in between late 1970s new wave and the 2001 “New Rock Revolution”, the Five O’Clock Heroes have found themselves, somewhat inevitably, compared to a certain other band from New York, something which visibly irks Anthony Ellis.

“I just think it’s quite an obvious, lazy comparison to call us the new Strokes. It’s as if they think that music begun and ended with ‘Is This It’. I mean, that record was influenced by some of the same things that influence us too, you know. If we were fat and bald and in our forties having made this kind of music for the last twenty years, would they be calling us the new Strokes then? I think not. If you’re old enough to remember the likes of Joe Jackson, The Police, Elvis Costello and 10cc, then I think it’s really patronising to assume you’ve just copied another current band with similar influences to yourself. It does annoy me when what they’re basically saying is that this band has no depth.”

What about negative reviews in the music press? It must be difficult having to deal with criticism about yourselves, particularly if it’s more about how you look or where you’re based than the actual quality of the music.

“I’ve read some reviews where it seems to me the guy writing it saw a picture of us and dismissed the band without actually listening to the record,” admits Elliot, “and that sucks.”
“I think what really bugs me is when dismiss us without showing even one iota of any musical knowledge” spits an angry Anthony Ellis.

The name, the Five O’Clock Heroes, is obviously a reference point to The Jam song of the same name (‘Just Who Is The Five O’Clock Hero?’). Do the band feel that this could see them pigeonholed and stereotyped into some dark corner marked “Britpop Revivalists”?

“No, I don’t think so,” says a surprised looking Anthony Ellis. “One of my favourite albums as a kid was ‘The Gift’ by The Jam and that was probably the best song on the record. I just thought it sounded cool, I still do, no hidden meaning or double edged sword about fitting into any scene. It’s like, with say, The Ordinary Boys, that to me is a band who have totally copied everything, from the image to the sound, and I could understand people accusing them of being revivalists.”

There is definitely a “pop” element to your sound as well, though.

“Yeah, there is,” admits Anthony, “but I don’t see anything wrong with wanting to write catchy, memorable songs. I think these days, if you’re going to try and re-invent something, you end up doing it badly."