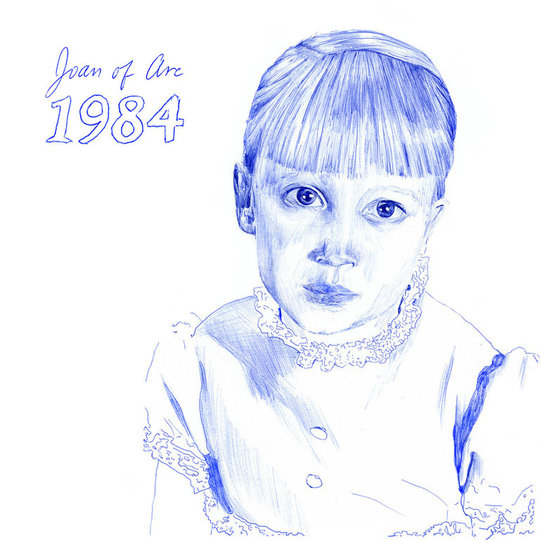 It’s hard being in a band when your career has spanned over twenty years. Especially when that band is noise-pop trailblazers Joan of Arc, who found their footing in early Nineties experimental dream-pop and neo-psychedelia. Especially when you’re fuelled by a divine-level of prolificacy, when you churn out an album every 12 months. Over those 20 years, the landscape has changed. We’ve seen vast musical advances since the band’s formation in 1995; absolutely and irrevocably. Which gives cadence to the saying 'adapt or die'; something that Joan of Arc are all too familiar with.

Adapt, they have, die, they most certainly have, yet resurrected yet again they offer us their most recent release, 1984. Never a band to shy away from subversion, what’s true of the record is true of the release’s namesake – those four numbers, 1984, become an instant manifesto. They say, we live in a time of post-truth, of dark political landscapes. A time where personal chaos is always underlined by politics; and who better to give you their opinion than Joan of Arc? After all, they’ve been there the whole way through.

It is this chaotic landscape the music in 1984 draws from. Echoing their 2000 release The Gap, the LP runs together with no pause to change over. Each sound is brought in carefully, as bricks and mortar to build up a fragile new fortress for us and the band to occupy.

But this is The Gap refined, fine-tuned, the fortress fresh with a new coat of paint. Stairs and picture frames polished and ready to dazzle. Where The Gap jarred, this calms. Where The Gap demanded concentration, the same tricks applied here over-power and soothe, they trick us into harmony, make us stare up at the night-sky before we even notice our direction. Great swirls of discordant synths knock at the front-door of regular beats, pianos drift in and out lazily. The smoke for the fire that eventually burns down 1984 is violins, double bass played vividly, reverb and echo on vocals. The untidiness of previous releases has been tidied up, along with, incredibly, Kinsella’s voice here reduced to the ghost you didn’t see in the dead of night, present only as a moan on a mere two of the album’s tracks.

So who could have possibly stepped into Kinsella’s huge shoes? None other than guitarist Melina Ausikaitis; who provides the spine for 1984. Her lead,vocals jar like Kinsella’s, but they’re also the equal and opposite. Her voice is raw, bubble-gum, thick with a Midwest twang that occasionally syphons off into a mighty roar; and set against the neo-psychedelic castle that Kineslla has spent so long building – the overall effect is to unsettle, but in an entirely unique way. These are absolutely not the type of vocals that should be atop this kind of beautiful musical landscape – but, this is Joan of Arc, they need to keep us on our toes, so it absolutely works.

It’s summer-break music for overachievers who grew up to be misanthropic. It’s nightmare symphonic, something that’d play in the movie of your life once you’ve died and the credits rolled. Stripped back more than we’re used to from Joan of Arc, 1984 preserves their sense of humour in the track names only (‘Forever Jung’, ‘Psy-fi / Fantasy’ and ‘Maine Guy’) littering their work instead with pure statements of intent. “Stop chicken shitting all over your life” (advice my ex-boyfriend could do well with), “…all my life I’ve been eating shit, but look at me, I’m the real punk kid” – statements which accuse the state of American politics and society of everything they’re guilty of. Yet, there’s still the humanity from Joan of Arc we’ve come to expect. Sex at grandma’s in tatty old chairs. Acerbic bites at Maine hipsters. Obtuse relationship advice from friends in the form of vertigo. Pauses where you feel tiny, sunrise lyrics to make you feel your tallest. It all amounts to resplendence, and your new fortress edges more on the toes of art-piece than simply alt-def-not-emo music.

So if you’re gonna listen to 1984, promise me one thing. Listen properly. Have a long, stressful day. Come home full of sadness and ennui, as the misanthropic heart in your little chest beats that you deserve better. Take off your clothes and lie on your bed naked; smoke a huge joint and float in the ocean of the two negatives that, like the exception that proves the rule, strike hard and make such beautiful light.