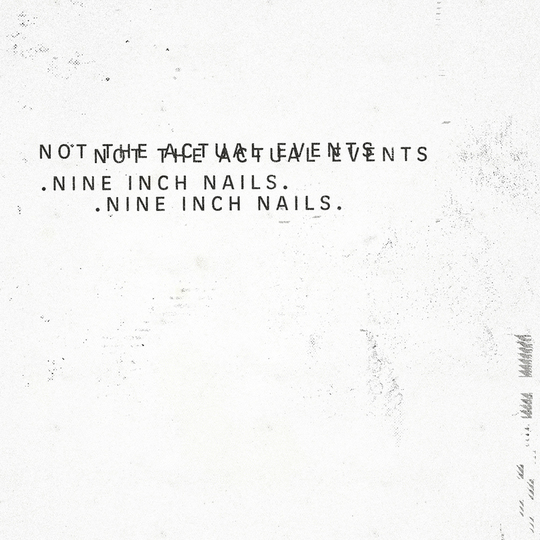 Even after coming back from hiatus, there was a sense that Trent Reznor’s Nine Inch Nails were stuck with a certain formula: a post-industrial template for mid-lifers who secretly wanted their music safer. Yet at the same time, Reznor’s film-score work alongside Atticus Ross was taking off into a completely direction – epic, avant-garde and wholly original. In 2016 alone, the two managed to score a piece dedicated to NASA’s Juno mission, as well as contributing several stirring pieces to the environmental documentary, Before the Flood. So with the late announcement of new Nine Inch Nails material, I was curious to see which Reznor would be turning up.

The answer to this; neither and both. Not the Actual Events is a five-track EP that is an erratic display of new wave-punk, synth-pop, formulated grooves, and gothic overtones. It sounds like Reznor working in the studio like no one is watching, shouting to himself, punching random synthesizers. It’s an artist free of any unnecessary expectations. In that way it’s very reminiscent The Fragile, perhaps the most creative body of work by the project.

Interestingly enough, Atticus Ross is now listed as a permanent member of the band. That being said, with Nine Inch Nails forever being a carousel of performers and songwriters, it leaves us in ambiguous territory as to who else might be behind this latest incarnation of the act. It’s not as if Atticus is new to the fold though. He’s credited on most of Nine Inch Nail’s recent works, including the tame Hesitation Marks and The Slip. So what his offical role is now, we can’t be sure. But his contribution to the further running of things is profound. The EP kicks off with ‘Branches / Bones’, a bare-backed Reznor classic built a programmed drum-loop, bassline and typical guitar. There’s ‘She’s Gone Away’, a kind of homage to The Cult, and ‘Burning Bright (Field on Fire)’, a hells-on-wheels soon to be set-closer that your Apple earbuds will never do justice to.

Just when you thought Reznor and his obscenely large biceps had been plugging away far too long on what was essentially a Nine Inch Nails tribute act, he sets things straight again with an original, well-produced, no-bullshit record. More of this please, and less of that other stuff. And let’s hope that further Trent Reznor and Atticus Ross film scores don’t start sounding like old Nine Inch Nails records, because that would just be weird.