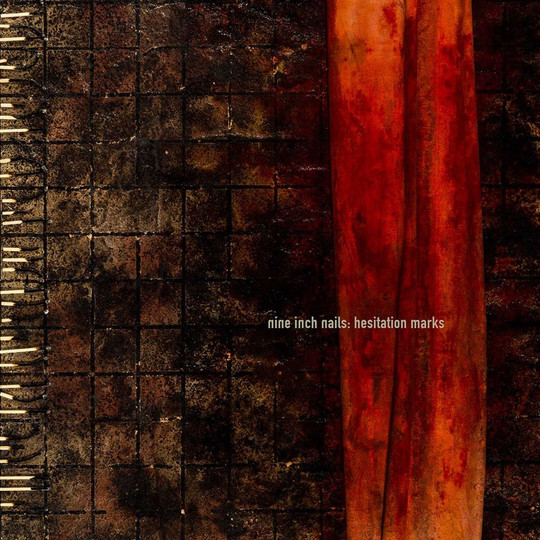 Like the tectonic plates of a stone heart dragging together... (no, no, that isn't the way to kick this off...)

He wants you as a slave. He captures you. He lets you go, but stalks you, whispering from the shadows... (nor is that... maybe it's best to start at the beginning...)

The first sound you hear are these little pulses. They’re little beats, that tease. Beats that creep quietly. Beats, made by a man (a sampled first beat of a babies heart? Or the snap-crack of a bone?) and processed by his evil machines. And then, before the prelude reaches any kind of climax, ‘Copy of A’ bursts onto the scene and you find yourself riding these green pixelated horses into battle...

Actually, let’s not begin this review in chronological order. This isn’t gonna be one of those track-by-tracks that runs out of steam with the twelfth 'and then'. Hesitation Marks is the return of Trent Reznor and Nine Inch Nails and right out of the gate, it's clear that this time he’s gunning for the future. ‘Copy of A’ and ‘Came Back Haunted’ blow the doors open, and let's not piss around, these are two masterpieces to add to the NiN best of. They both soar in burbling synths and have hooks that sink their teeth in wherever they want, shaking you like a rag doll and leaving your fingers stretching for the repeat button. Perhaps you have already flung your limbs around to them, but if for some reason you haven’t, come back back after the embeds.

“What a pathetic string of words. Just leave them laying on the floor...". ‘I Would For You’

From the steam, bluster and chaotic noise of the industrial revolution to the contemplative, sedate, desk-bound industrious world of today, Hesitation Marks feels like it's just another movement in Nine Inch Nails' career-long symphony. Its release may well mark the moment when the world finally begins to acknowledge that Reznor is a modern day Mozart.

Imagine Amadeus with today's tools at his disposal. He would undoubtably be making 'bangerz', composing music that elevates people's bodies and minds, hitting them as powerfully as possible with a well-defined signature palette of sound. That's exactly what Reznor has done since day one, and with Oscars and Grammys in the bag, that renaissance man clarity of vision is slowly becoming clearer, not least on this latest collection of lazer-gilded melodies.

Take ‘Copy of A’ which has got that ‘Bite the Hand That Feeds’ dancefloor-filler party-on-the-edge-of-the-world edge. It - like several other tracks on Hesitation Marks - could be a distant cousin of ‘In Motion’ (the track used in the club scene in The Social Network), albeit the gnarlier relative you're excited to see and end up getting up to no good with. ‘Disappointed’ ruts on a similar sweaty dancefloor, although the use of the Erhu gives the track an eastern mysticism that contrasts the cold Kraut haus-party vibes - it’s got just enough Bollywood buried beneath its dark heart that it’s almost as if Danny Boyle closed Slumdog Millionaire on the set of Sunshine. There are a lot of these subtle big screen-friendly collisions of ideas and cross pollinations of genres (there’s even a touch of reggae on the redemption march of ‘Find My Way’), which slowly reveal themselves 20 listens in.

‘I Would For You’ is an extraordinary voyage upon a sea of guitars, it takes a gentle groove of beats, a ‘Down by the Water’ (PJ Harvey) bass growl and crawls to a crescendo, dragging an orb made of metal upon its shoulder. It’s the sort of track which could make a lesser band's career, but it sits toward the end of Hesitation Marks as a song thats beauty and power almost passed me by on first listen. Similarly, ‘All Time Low’ begins with a funky Atoms for Peace-ish groove (it’s hard to pin sci-fi funk to many other names) and across its six minutes, the track evolves into a brooding slice of Eno-esque, ...Bush of Ghosts-ish dreaminess. It’s interesting to hear a NiN track in which things actually fall apart or at least get gradually gentler. By the time the engine room howls from the bowels of earth are silenced on closing track ‘Black Noise’, this loud to graceful structure seems to pretty much mirror the shape of the record too, with the front-loaded standout tracks.

Familiarity can breed contempt but it's testament to Trent's sound palette that these songs sound familiar like they're painted in a similar style - it's coherent rather than samey. Every moment of the record reflects down the rabbit hole of NiN's past, but also feels fresh and oddly - perhaps because everything feels like it's pulsing forward - like it looms beyond the current EDM zeitgeist, and can see a new dawn for electronic music, and rock music, and metal and industrial and classical.

It's not a record without fault. 'Everything' feels like a throw-away concession to rockist fans - not too dissimilar in its crash-bash to '1,000,000' from The Slip. Trent also sets a standard early on in the record that the bar is placed so darn high that no matter how great everything else on this record is, every track after the opening duo will fail to leap it. ‘Copy of A’ and ‘Came Back Haunted’ become two monolithic towers that cast a shadow across the rest of the record. It’s almost as if a band arrives, and then you’re left with a Reznor solo record, albeit one that carries on where Thom Yorke’s ‘Harrowdown Hill’ left off. It's a shame, as the body of work that lurks beneath the extraordinary face is a delightfully dark swoop of dark-disco and symphonic games with gravity.

Then again, if The Fragile was Reznor’s Sistine Chapel, then Hesitation Marks is like Leonardo Da Vinci’s sketch of the aerial screw (helicopter), hinting at what the future may hold, and blowing minds, but never getting as far as delivering on its promise. There’s a master at work, no doubt about it, but he’s already living in the future writing complex symphonies, letting the rest of us know that everything’s going to be ok.