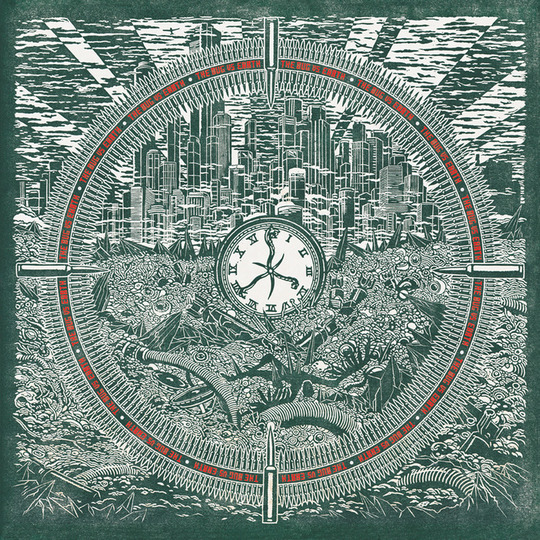 Though ostensibly little more than a double A side single, the meeting of Dylan Carlson and Kevin Martin calls for an album’s worth of attention. As the sole proprietor of Earth, Carlson’s been on a recent winning streak, gradually reigniting his powerful drone metal project that essentially created the genre back in the Nineties and mutating it with psychedelic flourishes, additional shades of colour via varying instrumentation, and most notably on this year’s phenomenal Primitive and Deadly, the surprise addition of actual vocals singing actual words.

Kevin Martin’s been making music just as long as Carlson but rather than trundling his way through a mythic slow voyage, Martin's spread his talents far and wide. Though he's most famous as The Bug, he started life as a purveyor or industrial crossover weirdness at the start of the Nineties, fusing the decade’s various club and rap styles with kaleidoscopic freeform industrial rock tropes and blasting saxes like his life depended on it in seminal bands like Ice and GOD. Martin found himself later at the turn of the millennium as fully formed techno and dub producer, plundering the long ignored dark shadows in the musical trade routes between Jamaica and the UK. This year’s Angels & Devils in many ways brought together Martin’s multitudinous musical facets into something of a grand opus. Even Martin's industrial past came back in a big way on Angels & Devils, with Justin Broadrick (of Godflesh, and Jesu amongst others, and a close collaborator of Martin's over the years in several bands including GOD and Ice as previously mentioned) adding his signature relentless guitar attack to the underbelly of Flowdan-voiced tracks 'Fat Mac' and the readymade anthem 'The One', in the process unveiling dancehall's secret demonic face. So in many ways the marriage of Earth and The Bug winds up working much like the latter's standard collaborative approach, and resultantly it all comes across as a maddeningly good postscript to Angels & Devils, blending the dreamy atmospherics of that record's first side with the bacchanal aggression of the second.

The seven-and-a-half minute 'Boa' opens to the dusty Americana aesthetic that's been at Earth's core since Hex, invoking barren dust bowl landscapes via windy synth sounds and the simmering doom-country twang of Carlson's trusty axe. A few layers of guitar parry melodies for a couple of minutes until Martin sets a drum machine in motion with a slow dub beat, full of busy robotic hi-hard and underpinned by gnarled fuzzy power chords from Carlson. The pair duet through a couple of peaks and troughs, but mostly assume Earth's minimal compositional remit and let the shadowy slow jam loop a few times until it eventually disappears into the cosmos leaving behind only the tinkling of tiny bells from Martin. Five minute flip side 'Cold' is even more shadowy, reflecting shimmery tones through a hall of mirrors at the start and spinning sliced up samples of Carlson's guitar. Another bassy rhythm kicks in and again the pair ride a dark blend of distorted notes and banging offbeats to the all too soon conclusion of the EP.

This meeting inadvertently touches upon that all but forgotten experiment that held so much sway only a decade back - the of meshing of metal with electronic music. Not to say this is nu metal redux or anything, but both ‘Boa’ and ‘Cold’ remind us that behind every filthy Fred Durst lyric there was once a genuine moment of pioneering alchemy. It helps that both The Bug and Earth are at the top of their games - both have produced not just personal bests, but some of the year’s best albums full stop. But metal and electronic music have unfinished business. Fingers crossed this fine collaboration is only just the first of its kind.