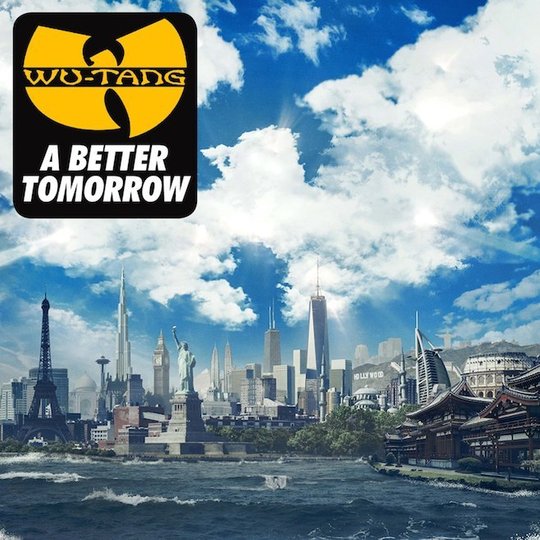 It all started with Cher. Shaolin Shadowboxers the world over nearly fell off their chairs back in May when Forbes was granted an exclusive snippet of Wu-Tang Clan’s most outlandish project yet, the quite-literally one-of-a-kind album Once Upon a Time in Shaolin. Purportedly a record that’d been made secretly over five years (and is now securely encased in a lavish nickel and silver box), it wouldn’t be made commercially available, but would instead tour museums across the world before being sold to the highest bidder. And, as that Forbes snippet revealed, it featured Cher on vocals. CHER.

So far the prized vinyl’s global jaunt has yet to be confirmed (though RZA did let slip to Rolling Stone last week that it might be exhibited at an Art Basel event in Miami), but the attention that the format – and Cher’s guest warble, no doubt – generated was off the scale, ensuring that the actually-available A Better Tomorrow would have to be enough to pacify the clamouring, non-millionaire Wu lovers desperate for new material (albeit material that wouldn’t feature Cher on vocals, sob).

A fine PR stunt, perhaps, but the nine-piece’s sixth studio album (a little inaccurately touted by new labelmates Warner Bros as the 'twentieth anniversary album') arrives with a substantial public interest in the seminal hip-hop group restored, despite never collectively reaching the heights of 1993 debut Enter the Wu-Tang (36 Chambers), a record that is bone-crunchingly vital to this day. Fifteen new tracks make the cut on A Better Tomorrow, with the oft-masterful RZA handling production on ten of the offerings. But the record doesn’t successfully break new ground as much as it reassuringly treads familiar paths: samples of dialogue and fighting sequences from old martial-arts films, cut-and-paste instrumentals that numerous members of the Clan take turns to go in over, and a plethora of references to those halcyon ’93 days. You know, classic Wu-Tang stuff.

Opener and third single ‘Ruckus In B Minor’ launches an immediate nostalgia trip as RZA firstly references ‘Bring Da Ruckus’ as a means of proclaiming the group’s pre-eminence, before a familiar voice from beyond the grave pipes up: “It's the ODB, kid, once again coming through your area / And I'm going to tell you one time, you gon' loooove this!” A touching homage in part to their departed brother-in-arms, Ol’ Dirty Bastard’s posthumous affirmation speaks volumes for the Wu’s long-standing self-confidence, which continues unabated throughout the record. With 20 years’ worth of experience in the bank, it’s only right that they possess that kind of poise – hell, when the 43-year-old Method Man chastises a youth/fellow rapper for his lackadaisical dress sense (“Youngun, I can see your draws, pull your pants up / Can't even call yourself a man until you man up”), he’d do well to listen.

Indeed, looking back on the chasm-sized impact that the Wu made in the early Nineties is a recurring theme of the record: Master Killah references it in consecutive lines on both the airy ‘Felt’ and the jazzy ‘Never Let Go’, giving nods to his verses on ‘Protect Ya Neck’ and ‘Da Mystery of Chessboxin’’, whilst the murky ‘Pioneer the Frontier’ (an excellently-titled track, I must say), includes warped samples of ODB and snippets from the famed The 36th Chamber of Shaolin film that has so entered into hip-hop legend. RZA’s fondness for old soul and R&B samples, meanwhile, regularly surfaces: the title track, for instance, is a pleasant switch into uplifting and melodic territory due to its Harold Melvin & the Blue Notes’ sample (1975 single ‘Wake Up Everybody’); though its optimism is punctured by Raekwon’s rather-pertinent social observation: “We want justice, police supposed to protect and serve / And then they shoot us down like wild animals”.

But it’s not a total 1993-fest: ‘Mistaken Identity’, for instance, has a very clean and structured instrumental, with electric guitars and keys facing off over a rocky beat that wouldn’t be out of place on a recent Eminem joint (which, depending on your standpoint, can either be taken as praise or criticism). The relatively short ‘Crushed Egos’, meanwhile, swaggers in over the mirage-riven horizon like the hip-hop soundtrack to a twenty-first-century Western, Tarantino (a self-confessed Wu fanatic) style. RZA’s tongue-twisting four bars towards the end are a true delight, putting down many of his contemporaries both young and old with the likes of “Non-athletic, anti-Semitic synthetic rappers get no credit / Pathetic septic lines, incompetent styles not embedded”.

Other un-Wu-like moments crop up when guest vocalist Nathaniel sidles up to deliver a mellifluous hook, as he does on the otherwise gang-mentality cut ‘Ron O’Neal’. His contribution to ‘Miracle’, however, starts out like an excruciating ballad from a Disney musical (let’s say Mulan, given the Wu’s affinity for Far Eastern cinema) and ends with a weird, hands-in-the-air Imagine Dragons-esque arena-rock sequence. Thankfully, it’s saved from being condemned to death by killa-bee through its intermittent thumping beat and compelling verses from Inspectah Deck and Ghostface Killah.

In its accompanying press release, RZA declared that when it came to signing to Warner Bros., 'in the words of Ghostface, "we're getting Bugs Bunny money."' Raekwon, meanwhile, told Jon Stewart on The Daily Show in August that he considers what he does 'as a sport' as he is 'an athlete of music.' So whilst present-day and future Wu material may take on a semblance of pension-driven recreation – how they’ll split the millions that Once Upon a Time in Shaolin will inevitably garner is anyone’s guess – the group’s collective spirit, albeit not quite ever on the ’93 level, is still very much alive and relevant on A Better Tomorrow. Just think what Cher would do for them, though – anyone got a spare $5 million kicking around that I could borrow to find out?