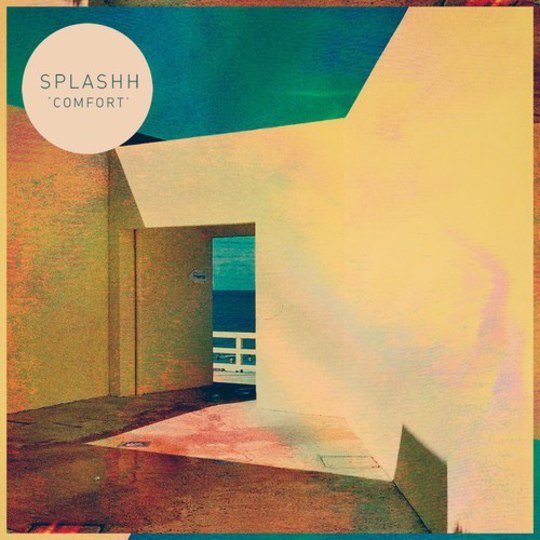 "I need a long vacation, some place to clear my mind" sings dreamy-voiced frontman Sasha Carlson on one of Comfort's many highlights. While not exactly conforming to the stereotypical slacker ideology, it could be consecrated as a statement of intent where Splashh are concerned. Formed in the early part of 2012 by Australian-born singer/guitarist Carlson and fellow antipodean guitar player Toto Vivian, they didn't even have a rhythm section prior to booking their first gig. Cue the subsequent recruitment of New Zealander Jacob Moore from The Checks on drums and Wolverhampton-born bass player Thomas Beal and voila - Splashh were borne. Since then, it's been something of a universally upward trajectory for the four-piece, whose reputation has continued to soar courtesy of three fine singles and a handful of free downloads via their website.

They're somewhat mistakenly described as grunge revivalists in some quarters; granted, Comfort opener 'Headspins' owes a small debt of gratitude to Nirvana's 'Sliver' in the same way Feeder's 'We Can't Rewind' does for example. But that's precisely where any similarity ends. Sure, there's little doubt a lot of Splashh's influences come from what many perceive to be the halcyon era of independent guitar music: 1987-1992. But rather than simply ape the obvious, there's a hell of a lot more thought gone into this record. So much more in fact. Listen again to 'Headspins' and there's middle eights Britpop stalwarts Elastica and Sleeper would be proud of. Meanwhile debut single 'All I Wanna Do' - re-recorded here in a haze of widescreen echo-laden fury - recalls Creation Records at its (pardon the pun) most creative juncture. And by that we're thinking The Boo Radleys Everything's Alright Forever or Adorable's Fade, possibly the most understated record to bear Alan McGee and co.'s names.

Take a trawl through Comfort's ten songs and there's a whole list of indiscriminate influences waiting to be pointed out. However, bearing in mind the members of Splashh are still only in their early twenties, such gesticulative like-for-like comparisons would not only be doing the band a disservice, but in many ways also an inaccurate source of reference. Take 'Lemonade' for example, a song which for all the life of it could fit like hand in glove onto The Wonder Stuff's 1988 debut The Eight Legged Groove Machine. Nevertheless, even with a Black Country reared member of the band, it would be highly unlikely to imagine any of Splashh being aware of the 'grebo' or 'fraggle' subcultures, let alone its later London offspring 'the Camden lurch'.

Instead, it would be more appropriate to focus on what Splashh bring to the table. And as Comfort consistently demonstrates, they're a sugary bundle of youthful exuberance wrapped in delicious halos of intoxicating reverb, ear-shredding fuzz and occasionally, pensive melancholia. Each song displays anthemic tendencies in its own right. 'Green & Blue' does trippy, kaleidoscope and downright infectious all in one four-and-a-half minutes sitting. Imagine what Pet Sounds would have sounded like had Brian Wilson discovered the art of de-tuning guitars through a multitude of effects pedals 20 years before Kevin Shields and there's your answer. "Where have you gone?" asks Carlson over a woozy concoction of atmospheric guitars and riffs blended in shades of candy apple grey.

Elsewhere, former b-side 'So Young' bounces around with the enthusiasm of a five year old that's discovered its first bouncy castle. "I don't want to waste your time, 'cos your time is so sublime", declares Carlson. Likewise with its then-flipside 'Need It', again bathed in a pool of Lamacq-endorsed splatterpunk that wouldn't have felt out of place in Deptford's New Cross two decades ago.

Unsurprisingly, Splashh's real dynamic lies within their live performances, so it is to the band's credit that they've managed to capture all the energy and excitement of one of their shows into an aural adrenaline rush lasting little over 33 minutes. Indeed, there's little filler here, which for a band that barely existed twelve months ago and has chosen to omit recent online giveaway and live favourite 'Sun Kissed Bliss' is a truly remarkable feat.

By the time reflective closer 'Lost Your Cool' brings Comfort to a close the only feasible option is to return to the beginning and repeat the listening process all over again. Now how records can you honestly say that about in recent years? Exactly. A hidden gem in a murky quagmire of landfill non-entities.