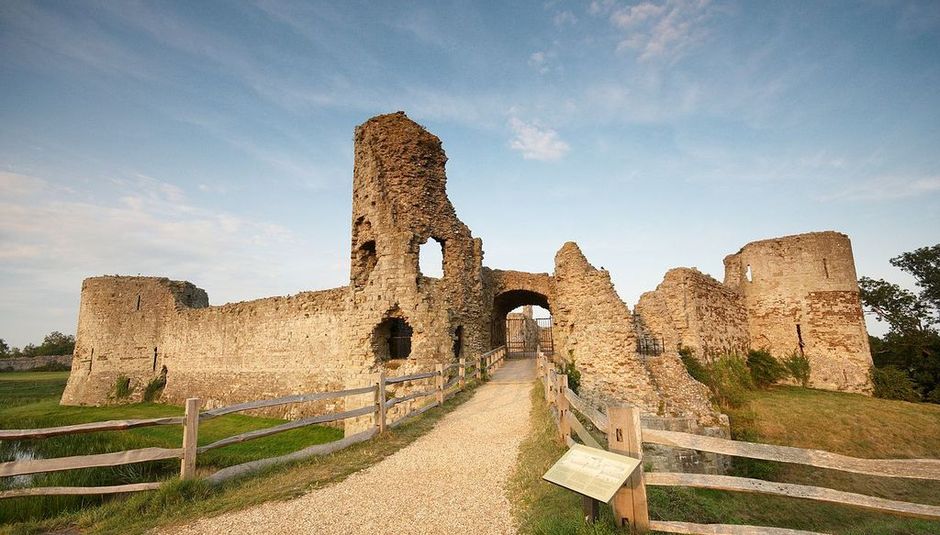 Phil Sumner from British Sea Power talks us through his favourite... castles.

"I love history and have been fascinated with castles from a young age. More recently outside of British Sea Power I have taken my son Louie to see some of the best castles in the UK.

This castle is brilliant. The day we went no one else was there. Maybe it's not as popular as most but that only made it better. It started life as a Roman fort called Anderida and is today one of the best surviving examples with most of its outer oval wall still intact. We were able to walk freely around the grounds making use of the personal radio tour you could borrow from the office and, bearing in mind Louie was 4 at the time, he never took them off for the entire run time. We scaled the walls of the site that William actually captured in 1066 prior to the battle of Hastings. When you think of the Normans influence upon Europe following their arrival here, it's pretty incredible really. Me and Louie had a fight up on the tower above the dungeon with the armour I'd bought him at Bodium Castle. I was seriously under armed and lost. The twin towered gateway is one of the earliest examples of its type, this is where they used to pour hot oil on you from murder holes and then finish you off with an arrow or two from one of the many arrow loops. Big stones could also be thrown on you if this didn't work. In its later life it was identified as a route for the invasion of England in the Nazi's Operation Sealion plan. Consequently, pillbox gun emplacements were built within the castle, one of which is still there today on top of the keep.

This castle really is your fairytale castle. It has a moat that surrounds the walls with access gained via a bridge. In its original state this 'L' shaped back to the left side as a defence with a preliminary bridge turret. Parts of the castle up the turrets can be accessed and you can sit on medieval toilets but everyone wants a go and it gets a bit crowded. Interestingly this castle never saw any action at all in its life and has seemed to pass frequently between nobles. If it had seen any action though it wouldn't have lasted long at all; its walls are less than a foot thick in parts and it seems its owners knew this and just handed it over if there was a chance of a fight.

If you go on a day when they do castle activities outside the grounds like arrow shooting and jousting it's even more exciting. The shop is pricey though and a children's full armour suit cost £40.

I first went here when I was five. If you're ever in the Snowdon area of Wales it's worth taking a look at this one. You could combine it with a trip to the Snowdonia National Park as well. This castle was built during the reign of Edward I when he conquered Wales. Taking a look around this one, it is truly amazing. It was built to last and withstand attack.

It was built with a concentric plan where one line of defences contains another. The castle was immortalised in the song 'Men of Harlech' where it withstood a seven year siege and was the last Lancastrian fortress to surrender. The trick up its sleeve was its supply port. The castle is built on cliffs, a natural defence anyway, but round the back of it a fortified passage was built which dropped the distance of the cliff. The sea used to reach up to this part 700 years ago and allowed the castle to be resupplied via shipping during a siege. A brilliant invention. Check out the sand dunes nearby, they're a good place to play castles in.

I've done a couple of shows in here. I think it still gets used today for the odd event. It's quite a beautiful little Norman castle overlooked by Laura's Tower set on a hill in the centre of the town. Shrewsbury has its own natural defence in the form of the River Severn which horseshoes around the inner part of the town having two bridges: The English Bridge and The Welsh Bridge. I think there is still a law that allows you to kill a Welshman in Shrewsbury with a longbow if you suspect them of stealing English trade or goods. Surprisingly it's against the law the other way around. Inside this natural moat the Town Walls were built which surrounded the inner part of the town but today there is only a small part still intact. During the 12th Century it was involved in a siege laid by King Stephen who successfully captured it. In the 1300s, Edward I got hold of this castle around the same time as he built Harlech Castle. After this time it saw little military action and the sandstone walls and parts of the castle built by the Normans literally fell into disrepair over the years. It's a good one though to visit, plus you get to see the town as well which is a big bonus. Maybe combine it with a trip to The New Meadow to see STFC for the all round maxi plus package.

Lastly it seems apt to mention Edinburgh Castle, one I went to a few years ago and also known as Das Schloss Edinburgh Castle. I'm currently writing this in the Edinburgh Travelodge on a day off from our tour with the Manic Street Preachers. It's pretty majestic this one, especially at night when it's lit up. Me and Scott just went for breakfast round the corner from it and it still looks like a belter. Guess who added this one to his Panini sticker book of castles in 1291?.... Edward I again, he absolutely loved castles. It didn't last long though, the Scots recaptured it in 1313. Interestingly, during the Napoleonic Wars most of the French prisoners were kept in the dungeons at Edinburgh Castle, which is apparently one of the most haunted places in Scotland. Deep below the foundations of the castle a series of tunnels were found to run from the castle to the Royal mile round the corner from our Travelodge. On a good day you can spot the headless drummer boy and/or the Lone Piper.