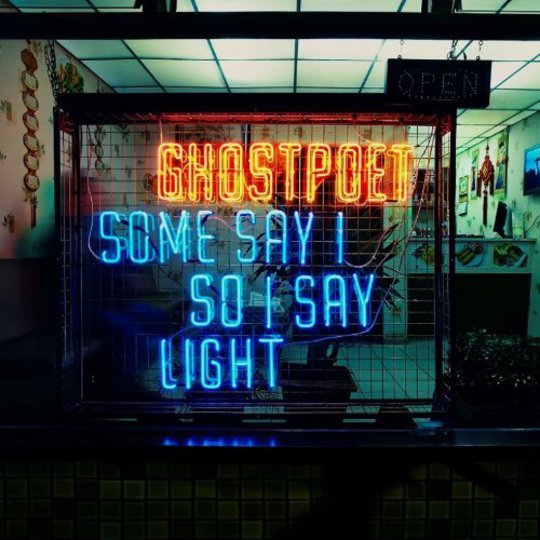 Ghostpoet really can’t stress strongly enough that he’s not a rapper. Having to make this point time after time in interviews, he tweeted the very day that I sat down to write this review that 'I'll repeat...I'm not a rapper, MC or lyricist...hiphop or any other genre for that matter doesn't mean shit to me.'

You can understand why it happens. There are few other pigeonholes for writers or listeners to push him into, but with Some Say I So I Say Light, Ghostpoet further dissolves the labels which you might apply to his vocal style, letting his words melt into the backdrop of arrangements which have become all the more monochromatically urban in spite of further live instrumentation.

If you really wanted to make the case for Ghostpoet as rapper or MC, you’d have to account for the incredibly soft focus on rhyme; the backbone to the poetry of rap, creating the rhythmic framework which defines it. The opening lines of lead single ‘Meltdown’ go “I was hesitant at first, thinking it ain’t the right time. The eggshell hearts - just cracked, crying on the train” – all of which unfurls without a look backward or forwards; without paying undue attention to rhyme schemes or strict meter.

At most you’re likely to find half-rhymes or intentional echoes awkwardly straddling couplets to unite them, but almost never will you find a full rhyme closing couplets with a sense of closure; with the propulsive momentum of conventional rap. His work is more stream of consciousness than even that, unafraid to let his words assimilate into the mood of the song, with imagistic fragmented lyricism complimenting their transient feel.

Indeed, to complicate the matter a little further, it’s frequently difficult to state with any confidence that Ghostpoet even operates within the medium of spoken word. To be sure, it’s nothing if not a close cousin, but the most memorable hook of the very opening track ‘Cold Win’ is melodic at heart. Because Ejimiwe’s vocal operates within narrow parameters at a very low pitch, it can be a difficult thing to detect, but he unwinds his words with a subtle drama of covert melodies.

The music itself plays like a beautifully reconciled contradiction. The core blueprints of the sound established on first album Peanut Butter and Melancholy Jam remain intact. But, possibly owing to the time spent touring the material in live performance; these tracks put a greater emphasis on their live components. The result, perhaps surprisingly, is that the sound actually becomes more haunting than that of the debut, with the slithers of live guitar licks, piano chords and guest vocalists serving to make the more trip-hop cores of the songs more achingly bleak by virtue of comparison.

And there’s Ghostpoet himself, representing the human and the vacant simultaneously: the man at the back of the nightbus, the man walking city pavements at 3am, the man alone at the centre of a dark expanse. Rap records are about putting a lone voice and sharp words at the centre of attention. This isn’t a rap record. Some Say I So I Say Light is the attempt to merge a lone voice into the black of the vast, surrounding landscape, and it succeeds absorbingly well.