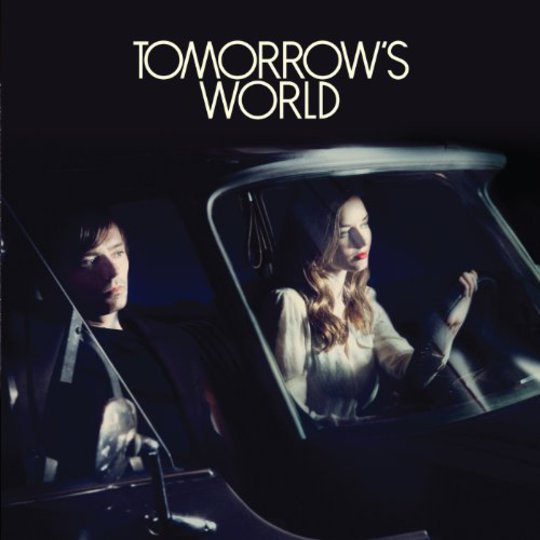 Anyone who thought Air’s last album Le Voyage dans la Lune detracted from their dreamy, Sofia Coppola-ready electro-pop will breathe a sigh of relief at Tomorrow’s World: a new project from Jean-Benoît Dunckel with London singer Lou Hayter. Creating twinkling, spaced-out soundscapes with one toe still on the disco floor, it’s closer in spirit to Air’s Virgin Suicides score with a dash of fuzz carried over from Moon Safari. Forget the 'thin Air' accusations leveled at Dunckel’s solo album Darkel: Tomorrow’s World is pulsing, luscious stuff, guaranteed to grab the collars of Air’s attentive fan base.

Dunckel adds a layer of mystery to these eleven electronic pop songs: a kind of hazy dreaminess not unlike Boards of Canada’s Campfire Headphase. ‘Pleurer Et Chanter’ mixes spaced-out bass with piano and kick drums into a summery acid trip; ‘Think of Me’ plucks at strings over a slow-dance keyboard melody. Both make use of Hayter’s voice which is light but mischievous, somewhere between Blondie and Belle & Sebastian. She weaves through the downbeat piano of ‘Don’t Let Them Bring You Down’ (”It’s not the time of year that brings me down/It’s not the rain that’s falling down, down/It’s all the people who are not around”) and spits out single words on ‘Life on Earth’ in time with the slow, repeating rave synth.

The only hitch with Tomorrow’s World is how often it reverts to the Air formula. The mix of slightly angsty funk and fuzzy electro is fairly consistent, but at times you could pull back the curtain and expect to find Nicolas Godin working hidden synths. On ‘You Taste Sweeter’ Dunckel offers throbbing, OMD-like Eighties pop with a bass that scrambles for dubstep, (but eventually falls back into Moon Safari cuteness), while ‘Drive’ is like the film, awash with brooding slabs that have to be spiced up with machine gun fire. It’s the first appearance of Dunckel’s voice, and while the track may be ideal for cruising a city at night he turns the vocal imagery up to 11 (”Follow the moon through the night/ I feel the pull of the machine/The blood is rushing to my head/I’m driving closer to the edge”).

Tomorrow’s World is a strong enough debut: there’s no doubting the quality of the songs here, and Dunckel and Hayter make emotional, Radio 2-ready electronic pop with enough letting go of the handrail to remind you they’re onto something original. ‘So Long My Love’, for example, builds suppressed guitar feedback into delicious trippy sound effects, while the glorious ‘Inside’ is a perfect finale, made of science fiction grime synths that chorus like John Murphy’s ‘Adagio in D Minor’. But several moments between are exactly the kind of wooziness we expect from Air… so why not release it on an Air album? These small snags aside, Tomorrow’s World is a record that shows Dunckel is (almost) ready to try out something new.