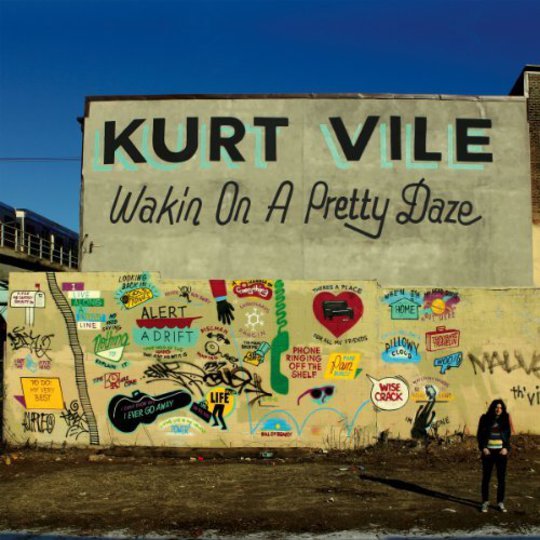 Just a glance at the track lengths of Wakin' on a Pretty Daze reveals which facets of breakthrough Smoke Ring For My Halo Kurt Vile has chosen to focus on for his new LP. The core sound remains intact: the gentle slacker rock and woozy guitar lines with backseat rhythm. But with almost all tracks above the six minute mark, and plenty exceeding ten, it’s clear from the very start that Vile has given himself over to his meandering streak, a penchant only hinted at on the album’s comparatively taught and streamlined predecessor.

Many artists turning in such lengthy tunes might suffer from a lack of poise or focussed structure to their compositions. But for Vile to give himself over to a free-flowing indulgence is to play to his strengths and expands upon the most cherished aspects of his prior work. As pretty as the spotlighted riffs of something like ‘Runner Ups’ were, or the strides made towards honest-to-god singer songwriter-ing by songs like ‘Baby’s Arms’, what Vile has always excelled at beyond all else is to ease his listener backwards into his languid soundscapes using nothing more transcendental than guitar and drum, his runs building cumulatively into a dimly glowing haze.

Opener ‘Wakin' on a Pretty Day’ is a perfect example of this – where the vocals melt into a smog of laid-back guitar lines, Vile steeling his nerve to bury the prettier guitar runs underneath the denser miasma of phaser, heightening the power of the hooks by keeping them so understated to be borderline subliminal.

To be sure, the counterbalance is that the album sprawls way over the hour mark, and an inattentive listen is liable to drift through a formless mood piece making little effort to build obvious dynamics or standout moments. But not only is Vile’s aptitude for drawing the listener in such that they are likely to be immersed from the get-go in any case, but Vile paces the record with a sensitivity to its seventy minute running time. It’s a marathon, not a sprint, and the structuring of the album demonstrates an awareness of this.

In a collection of such unapologetic indulgence, shorter tracks like the three and a half minute ‘Never Run Away’ offer the respite of immediate gratification, by design as well as by default. It’s the readiest for radio number on offer, with the album’s hookiest vocal melody, and textural flourishes selling the broadest strokes of lyricism as well-crafted earworms. Similarly, following the eight minute of ‘Too Hard’ – a slow paced confessional drained of rhythm section – comes the jaunty little ‘Shame Chamber’, all country licks and ‘woo’ hooks, to quench the thirst at exactly the right moment.

Wakin' on a Pretty Daze is one of those rare examples of an artist’s uninhibited self-indulgence resulting in an LP which plays firmly to their strengths. Undoubtedly, it’s an album which moves away from the tighter verse-chorus structures of breakthrough Smoke Ring For My Halo, but one which takes the dive into looser structure with the best of faith – retaining the barely out of bed vocal lines and subtly intoxicating guitar licks, while knowing that the listener is more than willing to follow Vile down his hazy rabbit holes over six, eight, ten minute jams of softly focussed bliss.